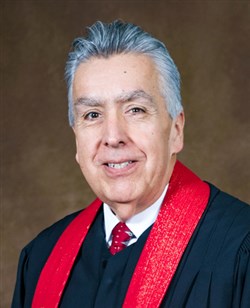 Ruben Saenz Jr. serves as the resident bishop of the Great Plains Annual Conference of The United Methodist Church with offices in Topeka, Kansas. The conference includes 1,005 congregations throughout Kansas and Nebraska.

Prior to his election during the 2016 South Central Jurisdictional Conference in Wichita, Bishop Saenz was the point person to the bishop and the cabinet of the Rio Texas Conference, based in San Antonio, in designing and implementing ministries to fulfill the conference’s mission. He served in the role of director of connectional ministries and executive director of the Mission Vitality Center in Rio Texas.

Born in 1961 and a native of Rio Grande City, Texas, Bishop Saenz earned a bachelor's of science degree in secondary education from Stephen F. Austin State University in Nacogdoches, Texas, and was a high school teacher and coach in Rio Grande City for six years until he began working full time at a small business that he and his wife started in 1984.

In 1993, they sold their business and moved to Dallas, where he began studies at the Perkins School of Theology at Southern Methodist University. When he earned his master’s of theology degree at Perkins, he was presented with the Perkins Faculty Award for the student who best exemplified the goals and mission of the school. In 2009, he received his doctorate of ministry degree from Perkins.

During his pastoral career, Bishop Saenz served churches in Dallas, El Paso and Edinburg, Texas. In those congregations, he addressed the issues of generational, social and systemic poverty that plague the region. In El Paso, he led the congregation to create and implement the Levantate – Get Up computer literacy program, targeting single mothers who were unemployed because of factory shutdowns so they could enter the job market at a sustainable wage level.