“But in your hearts revere Christ as Lord. Always be prepared to give an answer to everyone who asks you to give the reason for the hope that you have. But do this with gentleness and respect … . ”
I Peter 3:15 (NIV)

In the midst of unimaginable shock and grief, Mindy Corporon of Overland Park, Kan., recently became the embodiment of this scripture when she stepped forward to share her faith after her son and father were killed in a hate crime at the Jewish Community Center. A member of the United Methodist Church of the Resurrection, along with her son, Reat, and her father, William, she has received national attention for her testimony to the love and grace of God.

In a widely broadcast interview, Corporon said “People keep saying, how come you're so strong? I'm strong because I have family, I'm strong because I have faith," she said.  When asked why she felt the need to come forward and speak publicly, she replied “I don’t know.”  Describing a deep sense of peace in the midst of pain, she continued “God and my life and our family and our friends have prepared me for this.”

Many would point to Corporon’s life of discipleship as a life of preparation. We are shaped and formed by worship, prayer, Bible study, sacraments and Christian community. Thankfully, few of us will ever experience a tragedy like Mindy Corporon, or the visibility and the national platform that comes along with such a horror. Yet, we too are called to be prepared for the everyday opportunities to give a reason for the hope that we have.  Thanks to Mindy’s witness, we know a lot more about what it looks like to be ready. 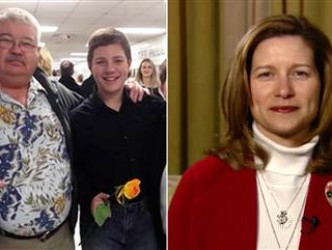