Faith-sharing in a “pre-Christian” context

There has been much talk over the past 5-10 years, from church-growth experts and church futurists, lamenting the reality that we now live at a time in which the church has lost relevance, credibility and position in both culture and society. These experts tell us that we now live in, among other things, what could only be identified as a “post-Christian” era. Likewise, word has it, that in this “post-Christian” era, the church is in the process of “imploding” and that all things church are undoubtedly going from bad to worse, doom to gloom, destruction to blah, blah, blah … 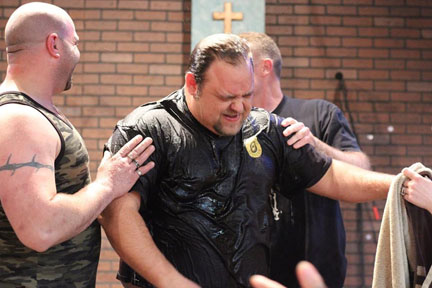 But, what if potentially, we have the power, as the church, now, to create and begin to live in an alternative reality? And, what if in the missional context that the church now finds itself, it could be that the best is yet to come? What might happen if we stopped lamenting, labeling and defining these times which now surround us as “post-Christian,” and instead decided to take a leap of perspective and begin to see them as “pre-Christian?” What if we stopped focusing on what once was, and opened our eyes instead, to a new paradigm of hope, embracing as the Church, what might just be a divinely appointed (kairos) moment of opportunity to be the church, and to begin to experience something very much like the First Century?

The United Methodist Church at Park City, Kan. (C@PC), started as a “parachute drop” which are known to have 90 percent failure rates. We started with 12 people, meeting illegally in a gutted, foreclosed storefront in a declining area hit hard by the economic downturn that began in 2008. This new start’s leap to a positive perspective and the complete embracing of a paradigm of hope was the only way C@PC could have survived beyond its first six months. It is an experience in which the congregation was forced to understand that faith-sharing in a “pre-Christian” context must be both culturally relevant and determined by the felt needs and the expressed interests of the mission field (see Acts 17:22-34).

The congregation has taken a "non-typical" approach to how we engage with our mission field in faith-sharing, both by employing the use of social media for coordinating, publicizing and promoting events and outreach (cultural relevance/technology), and by determining what are the expressed needs of our target demographic in the planning of ministry and events (missional context). For example, as I write this article I am doing so with an ice-pack on a shoulder injury I sustained while taking part in a fitness obstacle course called “Hard Charge.”  The event was held in the context of our mission field. I have just posted pictures and comments from the experience on social media which is literally (as I write) exploding with interactions and connections between event participants, C@PC’ers, and their friends.

Events like this at C@PC are a great way to make our presence known in the community, and also to draw in, start conversations and create relationships with people who do not yet know Jesus or have a church home. For us, events like this are faith-sharing (evangelism) opportunities in a “pre-Christian” context.  And, we purposefully choose again and again to be active participants in events like this as a means of becoming all things to all people so that by all means we may reach some (see 1 Corinthians 9:20-23).

One of my favorite stories is that of Kris (Tex) and Andi and their pre-school aged daughter Addyson. I first met Tex at a "member-guest" sporting-clay event we sponsored in spring 2013. Tex , to say the least, was not a "churchgoer" and at that time, had no real intention of looking for or attending a church. He had been invited to our clay shoot by a work associate named “Tank,” a new believer at C@PC.

Fast forward a few months and Tex wakes up at 6:30 a.m. on the first Sunday in August with the thought in his head, “Get up and take your family to church, it’s time to change your life path and show everyone you are a better man than as they see you.”  So … he did just that. And, they kept coming. Then on Sunday morning, November 27, one year to the day of his mother’s sudden death, before worship started, Tex asked if he could talk to me. I said “Sure, let's step outside.”

In the parking lot that morning Tex told me about the death of his mom and how much he missed her, and about how she had come to know Jesus before she died. During that conversation I listened, shared a couple of thoughts with him, let him know that I'd like to pray for him about the pain he was feeling. But before I did, I wanted to ask him an important question. I asked, "Tex, have you ever prayed a prayer and trusted Jesus as your Savior?" He said, "No, I never have."

I said, "Well, when I pray for you in just a moment, would you like to pray that prayer and begin trusting Him as your savior now?"  He said, "Yes I would." Right there in the parking lot of our strip-mall church, while my worship leader played an extended worship set because he saw that I was otherwise occupied, Tex, a big giant of a man, a former bouncer, bounty hunter and addict, with tears streaming down his cheeks, prayed a prayer in which he committed his life to Jesus and trusted Him as his savior. And, it all started with a conversation at a clay shoot.
Since that day, Tex and Andi got married on Dec. 28, 2013, and Andi claimed her trust in Jesus as her savior, along with her sister Melissa and her husband Bobbi. Then, on Feb. 23, 2014, Tex, Andi, Addyson, Melissa and Bobbi, all got baptized and became charter members of C@PC. Andi’s mom, Zoe, also now comes to church, and Tex is the leader of our Outdoor Adventure Team. He was in charge of this year’s Spring Clay Shoot held this past Sunday, April 27. That’s the power of faith-sharing in a “pre-Christian” context.

This so called, “post-Christian” era in which we now find ourselves in ministry is, in my humble opinion, the best time there has ever been in the entire history of the church, to begin engaging in contextually relevant faith-sharing. Truly, the harvest is plentiful, but … who will take up the work of culturally relevant ministry to meet the expressed needs of the “pre-Christian” mission field? If not you and me, then who?  If not now, then when?

Tex is photographed during his baptism (see above).