In Layman's Terms: A book that challenges your thoughts on race 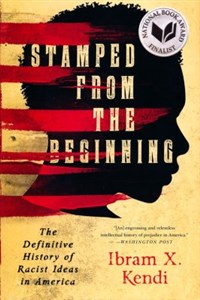 I think it’s appropriate that I completed reading the book “Stamped from the Beginning: The Definitive History of Racist Ideas in America” on the day we celebrated the life of the Rev. Dr. Martin Luther King Jr.

I made a resolution in 2018 to read two books a month. I fulfilled that goal on Dec. 29. For 2019, my goal is to read 30 books. I admit that while I was interested in the topic, I didn’t realize the depth of subject I was getting myself into with my first book of the year.

I found this scholarly work by Dr. Ibram X. Kendi, written while he was an assistant professor of African American history at the University of Florida, to be both challenging and exhilarating. As a history nerd, I appreciate reading the why and how behind events from our past. And Kendi does that throughout this book, which was a national book award winner in 2016.

Yes, I realize it’s now 2019 and that I’m quite late to the party on this book. But I think its principles are sound and provide the reader with real opportunities to do some soul-searching on the contentious subject of race.

Kendi takes a hard look at the challenges our nation continues to face regarding race by examining the lives of five key figures in the history of this subject from our nation’s past. Through their stories, he explains how he differentiates between three ideologies: segregationist, assimilationist and antiracist. According to Kendi, the first is obviously not helpful, the second includes good intentions but not the desired results, and the third is what we as a society should strive to be.

I tend to think Jesus would agree with him. From the story of the Good Samaritan in Luke 10:25-37 to the way Jesus shows respect to the Samaritan woman at the well in John 4:4-42, our Savior shows the importance of treating all people with dignity and to assume everyone we encounter fits the definition of “neighbor.” After all, salvation is available to all people.

As with the people in the Bible, our American history figures have their strengths and flaws.

In the story of Cotton Mather, a Puritan minister and author, I think Kendi addressed well the good intentions but failed results of enslaved Africans being uplifted and assimilated into society by converting them to Christianity.

In the story of Thomas Jefferson, the nation’s third president and author of the Declaration of Independence, I saw a snapshot of the often-contradictory words versus actions of leaders from throughout our nation’s history. You can’t get much more hypocritical than the man who penned the best-known document about freedom also being a slave-owner, who also had an affair with a slave and had multiple children. Contradictory indeed.

In the story of William Lloyd Garrison, a journalist and staunch abolitionist, I gained a new appreciation for the importance of persistence and how white people in America can and should take up the ongoing cause for true equality.

In the story of W.E.B. DuBois, an African-American sociologist and civil rights activist, I think Kendi makes the point that people can change. DuBois always fought against racism, but as he matured in life, he refined his arguments to push less for assimilation into society and more to an embrace of purely antiracist principles.

Finally, in the story of Angela Davis, a political activist and author, I think Kendi uses her activism at this point in history to tell the impacts of elections and policies from the Nixon administration to the end of the Obama administration.

Some of the content in this book can be difficult to read, even though we often know the stories he is relaying to us. Real consideration of shipping African-Americans back to the African continent — a place they had never seen in their lifetimes — drew parallels for me of talk of shipping people back to Mexico via buses when the United States is the only home they’ve known. Political maneuvering to manipulate people into thinking they are helping an entire group of people that they actually are hurting caused me to experience a bit of shame because of how I’ve viewed some leaders in the past.

But I think the most important take-away is the concept that racism really doesn’t have its roots in hatred and ignorance. Those words are easy to say, and they fit well on signs carried during protests. Instead, Kendi argues effectively, racism is rooted in self-interests. In other words, racism really is about protecting someone’s power — as examples, wealthy landowners in the early years of America and wealth and political power today.

I think most people know that point, but Kendi makes it clear through the stories from our country’s history in such a way that the reader can “connect the dots” and come to a new, firmer understanding.

After reading this book, I won’t strive for a society that is “post-racial” or “colorblind.” Both lead us to ignore race. Instead, we should embrace race and the rich cultural diversity it provides. We shouldn’t strive to be colorblind but instead pause to reflect on the many benefits we have when exposed to the cultures of people who look different than traditional white America.

We should strive to be antiracist because it is then that we see the real worth of every person, regardless of the color of his or her skin. While it will take a considerable time commitment to work through the five sections and 512 pages of content, if your church is considering a discussion on race, this is an excellent book to consider for a small-group study.

You can purchase the book at ChristianBook.com, among other retailers.