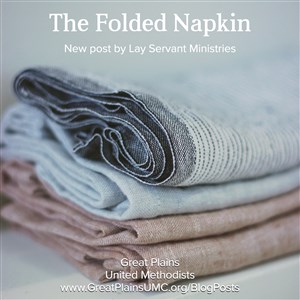 On a shelf in my kitchen, I have a stack of paper napkins. When it’s my turn to be hostess for United Methodist Women’s meetings, I bring snacks and also try to find napkins for the occasion. And, of course, there are family gatherings that call for special napkins, so I end up with a mixture of napkins for many holidays or special days. I have a few that are from more formal occasions that I have left from weddings, anniversary celebrations, etc. Now that I’m usually the only one for meals in my house, I can celebrate any holiday, or other occasion when I want by using the different napkins for my meals.

What do you do with your napkin at the end of a meal? Do you wad it up? Do you take time to fold it back up? Do you leave it on your plate or the table? Think about that for a bit.

On Easter Sunday, most of us probably heard the story of the first few people to find the empty tomb on that first Easter Sunday. While it was still dark, Mary Magdalene came to the tomb and found that the stone had been rolled away from the entrance. She ran and found Simon Peter and the other disciple — the one whom Jesus loved — the one we assume to be John. She said, “They’ve taken the Lord’s body out of the tomb and I don’t know where they have put him.” Peter and the other disciple ran to the tomb to see. The other disciple outran Peter and got there first. He stopped and looked and saw the linen cloth lying there, but didn’t go in. Then Peter arrived and went inside.  He also noticed the wrappings lying there, while the cloth or napkin that had covered Jesus’ head was neatly folded up and lying to the side.

Earlier on the cross, Jesus said, “It is finished.” That shouldn’t be confused with what he was saying with the folded napkin in the tomb. On the cross, he meant that his job on earth—his job of defeating death, his job of bringing all of us a means of salvation---was finished. But then with the folded napkin, he says there’s more---He’s coming back! He did come back and that’s what we just celebrated on Easter. He lives in us and he comes to us every day.

Since hearing this story, I think of that folded napkin as a reminder that I don’t have to be finished. I will never be perfect, but I can continue to learn, to grow in the Spirit, to serve, and to teach and reach out to others. As a Lay Servant, I can keep learning of more ways to do these things. There are classes to match everyone’s gifts or show someone new things that they can do. Check with your District Lay Servant Ministries Director or online for available classes and dates.