So far in our journey to better understand how best to comply with copyright laws, we’ve been focusing on music. Today, we cross over to feature films, television shows and movie clips.

Just as before, we’re talking about a license you can purchase from CCLI, but this time it’s CVLI — Church Video License.

This feature is a little more expensive than the music elements we talked about in previous blogs in this series, but if you intend to use video in your church, it’s an investment to save you from hefty legal fines.

Let’s be honest, movies are great, but they are expensive to create. For example, news reports put the cost to create the wildly popular “Avengers: Endgame” at more than $350 million. Let’s go back many years to one of my all-time favorite movies, the original “Star Wars.” That movie, with a far more limited range of special effects, cost $11 million to make in 1977, or about $46 million in 2019 dollars.

Movie studios have to recoup all the money they can from such investments. And a copyright infringement case could cost you a fine of as much as $150,000. And that’s a one-time offense.

So, a cost of $250 for churches up to 199 in average worship attendance for an annual “Total Producer” package CVLI license — which grants you access to movies and TV shows from more than 750 studios — is a much better investment than attorney fees. You also can take a cheaper route and subscribe to what is called the “Family Values” package for $95 for churches under 100 in worship and for $140 for churches with 100 to 199 in worship. But beware that the selection is far more limited at that cheaper rate.

What does a license allow you to do? There are a few stipulations that are critical to the use of a CVLI license. 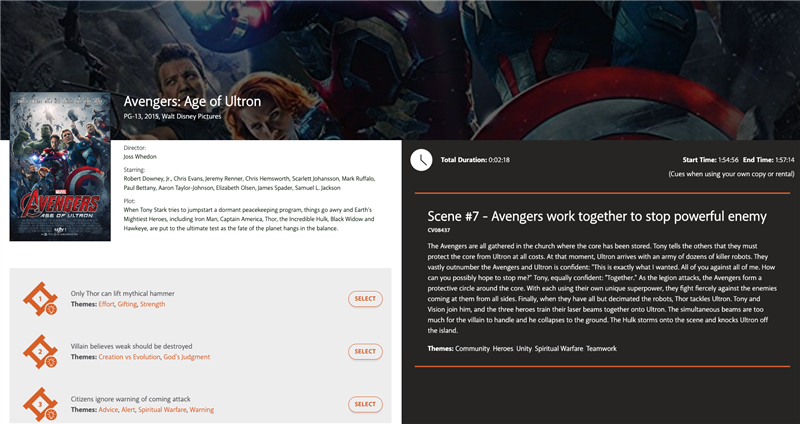 CVLI has one more feature that may be of use, particularly for pastors who want to use a short movie clip in a sermon. An annual CVLI subscription comes with access to the organization’s ScreenVue Vault. This is a treasure trove of tens of thousands of clips already trimmed so all you have to do is download them for use. In other cases, the clip may not be available for download, but the website provides the time stamps (shown above) so you know when to start and stop your own copy of the movie or TV show to make your point during a sermon, a huge time saver.

What can you use without a license? You really shouldn’t use any to avoid potential legal problems. I once bought into the idea that a church could use up to 2 minutes of a video without any problems. But the law doesn’t really allow for such a time limit. While the CVLI license is a little more expensive than a CCLI license for music, my best advice is not to risk it.

So, as summer draws near, make sure you have your CVLI license and then find some great ways to make use of it in worship and as ways to teach and entertain as part of your ministry.