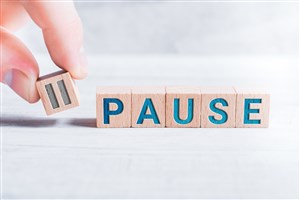 I’ll confess that I’ve spent the past two days at my desk digging out from a pile of emails and associated tasks that needed to be completed. It’s only fair since I was returning from being out of the office for 10 days.

I’ll also confess to feeling a little guilty for being gone that long. In 20 years as a journalist — the last 14 as an executive editor of a newspaper with two daily newspapers, a weekly newspaper, a monthly magazine and four websites — I never took more than five work days off at a time. Truth be told, I rarely got even those five days free from having two- to three-hour blocks of work while on “vacation.”

That digging out from the pile on the desk was worth it.

I’ve served in my role as communications director for the Great Plains Conference for more than four years now, and I’ve certainly had my chance to take some vacation time. But 2019, so far anyway, has been particularly challenging to find any chance for rest.

I had the privilege of traveling to the Holy Land with Bishop Ruben Saenz Jr. and 60 others from the Great Plains in late January and early February. It was a life-changing experience, but producing short daily videos during the trip also meant that as everyone else was getting to bed to rest for the next day, I was up for a few more hours editing footage. That’s not a complaint. Not even close. I love playing with the camera and putting together short videos such as the ones we shot in Israel. It just meant I didn’t get the kind of sleep I should have.

Shortly after our return to the United States, it became time to leave for St. Louis and the special session of General Conference. After that, we started a series of regional gatherings in 10 locations across Kansas and Nebraska to help people process what had transpired.

With spring came less work-related travel but a whole lot of family-related journeys. Our daughter graduated from college and got married within the same week. Our new son-in-law graduated from the police academy. And all of that happened in Colorado.

Even the family trips involved stress and work as we tried to make sure every detail was addressed.

Oh yeah, and then there was this little meeting we call “annual conference.”

I really wasn’t physically tired, but I could tell my mind wasn’t as sharp as I am used to it being or that I need it to be to serve the conference well. I finally decided I needed to take a break, a sabbath. I didn’t realize until last week just how much I needed that respite.

I have never really worried much about taking a sabbath before. Even when I was an executive editor, Sunday was usually the one day I rarely was drawn into anything related to work. Since serving in the Great Plains, other than the bishop’s town hall meetings leading up to General Conference, my Sundays usually were mine and rarely involved work.

But I was missing the point of the sabbath. I wasn’t taking time away to recharge the batteries so I could be as strong in ministry as I could be. By not taking time off, I was not really helping with ministry, I was short-changing God in my efforts because my thoughts weren’t as sharp as they should be.

As I turned to scripture, I gained a new appreciation for ensuring I take a sabbath, at least from time to time. God directs us to take a Sabbath as one of the Ten Commandments. Most of these foundational lessons for conduct take a single verse to explain. There are two exceptions: Instructions against making an idol (Exodus 20:4-6) and instructions to take a sabbath (Exodus 20:8-11). I think that may mean those two have a high priority to God. I think we tend to grasp the importance of avoiding idol worship, but I’m not convinced we understand the importance of taking a sabbath.

The prophet Isaiah gives us some explanation of incentives for taking a sabbath in Isaiah 58:13-14. The passage says if people will “stop trampling the Sabbath,” then God will “let you ride on the heights of the earth.” It’s a promise for success or triumph, perhaps because we’ll be focused on the Lord and because we’ll be rested and ready to make good decisions.

Jesus understood the need to get away from time to time. In Luke 5, we read about Jesus calling his disciples. He then heals a man with a skin disease. News of this miracle spreads quickly and widely. Huge crowds gather to listen to Jesus and to be healed by him. The passage ends with a statement that “Jesus would withdraw to deserted places for prayer.”

Jesus — the son of God — thought it wise from time to time to withdraw from the hectic pace of daily life to pray. I think it’s safe to say that such actions helped him regain energy and focus on his ministry.

After 10 days, I was ready to get back to work. I could feel the cloud lifting from my thoughts toward the middle of last week, and I felt more like my usual self. I certainly feel sharper of mind. And, to be honest, I was getting bored.

Thank you to our communications team for handling things while I was out and for patience from those of you who sent questions to me on everything from livestreaming to CCLI licenses to training opportunities. I think I’ve responded to everyone now. If I’ve missed yours somehow, please send me another email. I won’t miss it a second time.

I’m back in the office and ready to roll. That’s a good thing. Our team has lots planned for later this summer and into the fall, including a local church communications workshop with a chance to learn some best practices on content for your websites and social media, a shortened version of a multimedia worship tools workshop and a presentation on suggestions for intrachurch communications such as bulletins, bulletin boards, newsletters and even signage.

I hope to have more details within the next couple of weeks.

I enjoyed my time off, but now it’s time to get back to work!

Todd Seifert is communications director for the Great Plains Conference of the United Methodist Church. He can be reached via phone at 785-414-4224, or via email at tseifert@greatplainsumc.org. Opinions expressed are the author's alone and do not necessarily reflect the views of the Great Plains Annual Conference or The United Methodist Church. Follow him on Twitter, @ToddSeifert.