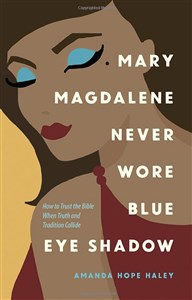 I’ve become a bit obsessed with podcasts the past few months. I guess that’s why I launched my own — “In Layman’s Terms” — a few months ago. I simply fell in love with the not-so-new concept of telling stories and sharing thoughts via the spoken word.

That love tied into another passion of mine while listening to one of my favorite podcasts, “The Bible Binge.” This podcast, introduced to me by Lisa Soukup, our communications administrative assistant, pits two people together who usually talk about pop culture in a different podcast but who also share thoughts on the Bible in this offering. It’s really not as sacrilegious as it sounds. The two hosts — Knox McCoy and Jamie B. Golden — are Christians who openly talk about their faith and who, it is easy to see based on their comments, study the Bible often and intently.

Anyway, on one of the Binge’s commercials this past season was a sales pitch for a book titled “Mary Magdalene Never Wore Blue Eye Shadow.” The name got my attention. I ordered it from Amazon.

I thought the book would be like a Bible study, an interesting way for me to work with my adult Sunday school class to separate truth from legend within the stories we have read in the Bible. Well, that wasn’t quite what I got. But I may have encountered something even better.

Pardon the pun, but she basically teaches those of us who have not gone to seminary how to dig deeper into our reading of scripture. I think it’s a great book for people who want to learn more about scripture, especially folks who may be thinking of adding daily scripture reading to their list of new year’s resolutions.

By the way, if reading the Bible is part of your resolutions, I think you’ve made a great choice.

Back to Mary Magdalene.

Haley uses this particular character from the Bible to help illustrate the difference between what the Bible actually says and traditions we treat as if they were scripture even though they are not. Tradition holds that Mary Magdalene was a prostitute before getting to know a first-century Jewish rabbi named Jesus. Problem is the Bible never says that.

After making that point early on, Haley then takes the reader on a crash course of some important topics that will help people better understand the scriptures. She brings up important concepts such as the languages the books of the Bible were originally written in and how translations sometimes work and don’t work into English very well. She brings up historical facts from, literally, thousands of years of history. She opens the readers’ minds to important aspects of literary genres.

That may sound a bit high-browed and boring. But let me assure you that Haley’s writing style is fluid, educational and witty throughout.

Sometimes the Amazon summaries aren’t quite right about a book, at least that’s what I’ve found at times. But this one actually is pretty true to reality. Readers will come away with a better understanding of how the books of the Bible got from being an inspiration from God to a man’s head and to some form of recording substance — papyrus, parchment or paper. She talks about translations. She talks about differences between real scripture and doctrines that have simply become popular over time.

Above all, in my opinion, she hits home the important concept of context within the scriptures. She points out again and again — using great anecdotes and examples — how we can’t view the Bible through only a 21st-century lens. We most certainly can learn from any passages in the Bible, but we must read the Bible by considering the life and times of people living in the moments that those words were recorded.

For example, when Paul tells women that they are to be silent in church in 1 Corinthians 14, did he really mean all women should sit there and be silent in church for time and eternity? Or was he urging women to stay silent at a particular time in a particular place as a means of identifying people who were teaching and/or spreading falsehoods about practicing faith in Christ?

I’ve studied the Bible for many years and have read the entire Bible multiple times now, but I have to say that I learned a few strategies for reading scripture that I will take to heart as I start reading anew in 2020.

Todd Seifert is communications director for the Great Plains Conference of the United Methodist Church. He can be reached via phone at 785-414-4224, or via email at tseifert@greatplainsumc.org. Listen to his "In Layman's Terms" podcast. Opinions expressed are the author's alone and do not necessarily reflect the views of the Great Plains Annual Conference or The United Methodist Church. Follow him on Twitter, @ToddSeifert.