The day started early as I wanted time around breakfast to spend with my host family as we were scheduled to leave for Harare about noon. We were all sad to say goodbye since we just began to get to know each other. The exchange about different ways to prepare fresh vegetables with Juliet Mutsonhi (the woman of the house) was an enjoyable evening activity. Juliet was eager to try frying okra rather than boiling it. I am eager to try cooking several vegetables together with beef to make a stew.

After breakfast and our farewells, District Superintendent Mutidzawanda picked up several of us going to Africa University. Some missed the earlier tour because folks were still with their partner circuit some distance away. I went to meet Lloyd Chaukura, the Mutasa-Nyanga District Chabadza communications coordinator, for more work on how to report out the partnership activity on the Great Plains website.

The children’s home is organized in family units with one house mother for 10 children in each home. There are matrons hired to be in charge of each household. In an interview with Agatha Chipidza, an 11-year house mother, she said there are eight houses. The family setting enables socialization in addition to teaching life skills in a more typical family environment than dormitory orphanages.

Chipidza said the children are referred to the home through the Zimbabwe welfare system. Children who are referred are typically orphaned or abandoned. Children range in age from infants to 18, however Chipidza said some stay longer if they are attending school or need additional time to move on with their lives.

Other staff on the campus include grounds people, substitute house mothers, the director Luke Makwanya and Janine Roberts who is the Hope Outreach Project coordinator for Fairfield. Roberts is from West Virginia and will soon be moving to Houston, Texas, to serve as a global missions director for a large congregations. Roberts is also a former FOSA board member. FOSA is the fundraising arm for the home. The home receives some money through the General Board of Global Ministries, local churches and local fund development in and around Mutare. They also have a gift shop with craft and art pieces made by residents of the home and area artists.

About four of us also stopped by the HIV/AIDS project gift shop as the HIV/AIDS hospital was located next door to the children’s home. Both were not far from a local primary and high school. 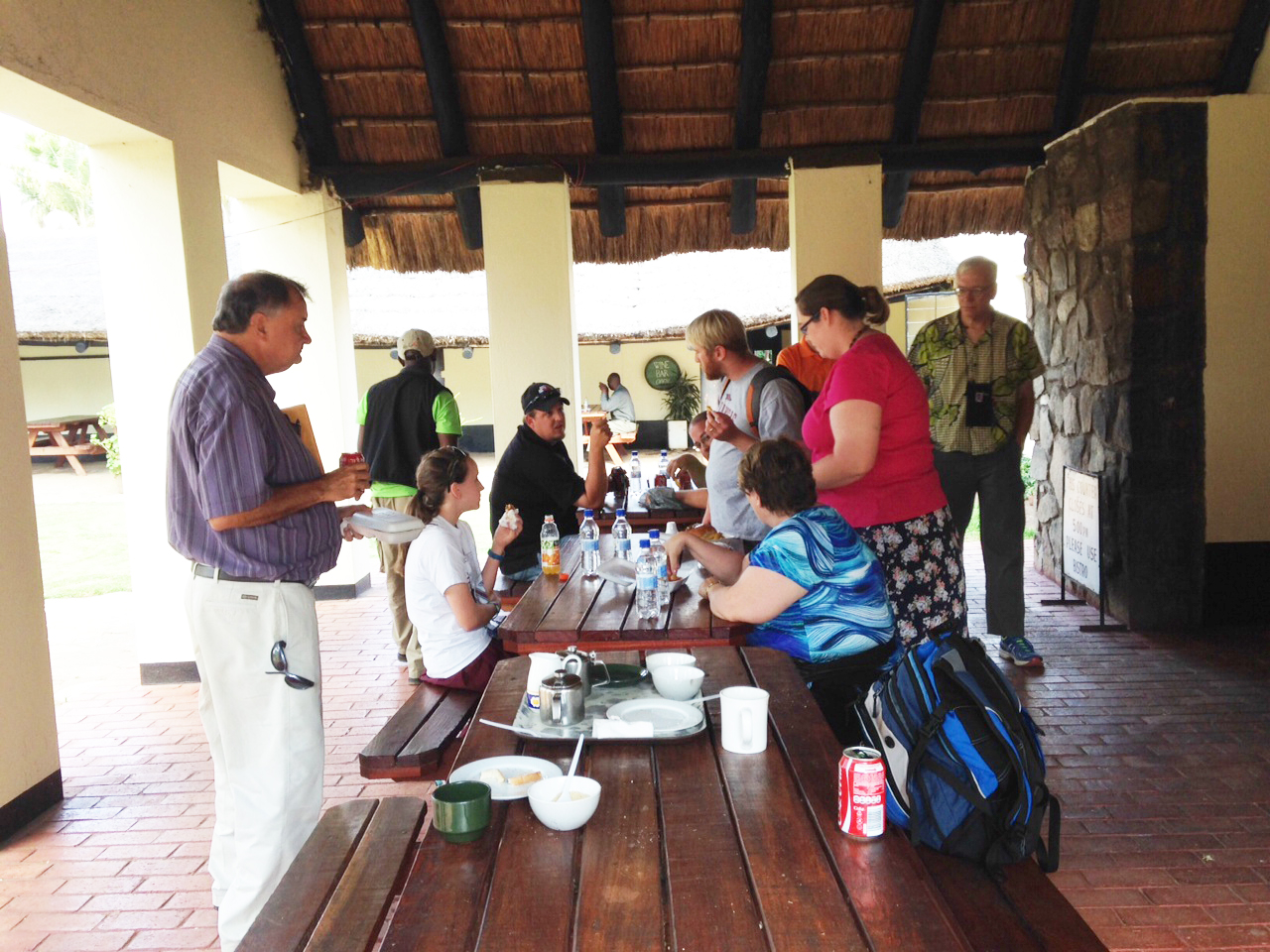 The entire group then gathered at the district superintendent’s house to do final loading of luggage into the Africa University travel van and trailer. Three people rode in a pick-up as there were too many for us to all ride in the van.

The ride back to Harare was as scenic as the ride to Mutare. We came out of mountainous-like foothills into rocky plateaus and open grasslands. In between were gardens, plantings and industrious folks trying to make money at selling all matter of fruit, vegetables, phone cards and such. There is place called the half-way house (halfway to Harare) where we ate lunch (pictured at left). It was resort like and very western with cheeseburgers and grilled cheese on the menu (not to mention inflated pricing). There were shops and a small market in the complex as well. It made for a nice break. The first half of the ride was all abuzz with all of us sharing our experiences with the partner churches and with our host families. The stories shared were rich with how God is working through the partnerships and through the committed pastors and laypeople at each circuit.

The second half was a little quieter with folks nodding off and others having quiet conversations about the mission experience as well and more getting-to-know each other conversations. 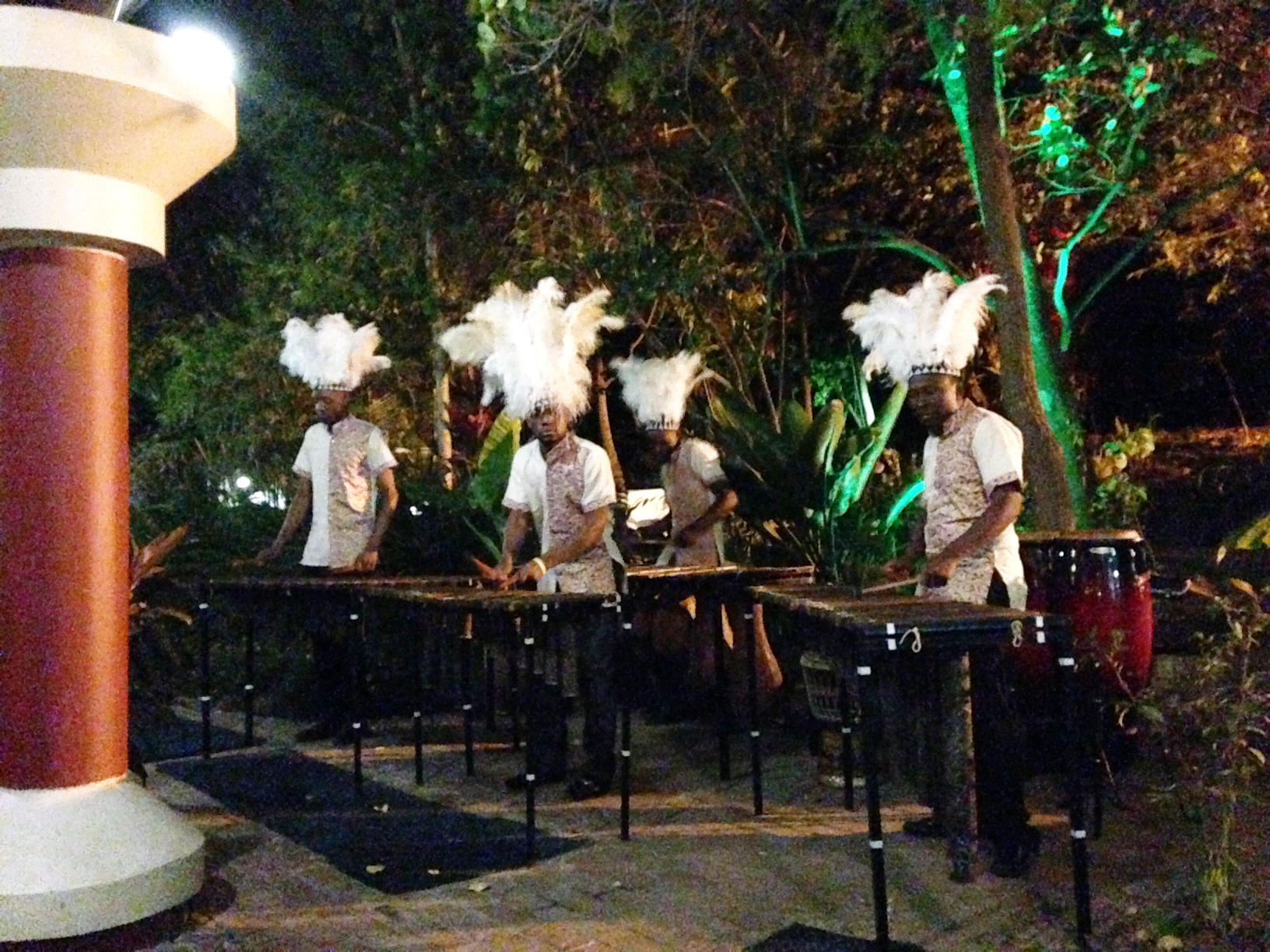 We’ve enjoyed very pleasant weather with today being the warmest of our days here. We arrived to the Cresta Lodge, in Harare, in late afternoon. (The Cresta Lodge entertainers are pictured at right.) We settled into our rooms and then enjoyed an authentic Zimbabwean buffet and music in the hotel restaurant.

Upon checking into my room, I learned that the key for my room was not returned from its previous tenant. They decided that a bellman would open my room each time I wanted to return to my room. Chali convinced them that this was a bad idea and after once getting settled into room 226, they moved me to room 198 (sort of like packing and unpacking twice).