After coaching the Song Competition in October, I was approached to assist with the annual Play Competition to take place in December. With my theatre background the department enquired as to whether I would be interested in directing the competition. My mind immediate sparked with interest but I quickly pulled myself back, what did they really mean by direct?

In college I majored in Theatre Arts with a self proclaimed emphasis in Management. My Senior project entailed managing and producing 4 “cabarets.” It was a broad and diverse experience in which I was working as producer, stage manager, house manager, box office and concessions manager- oh and a performer in the show too! It was a position of wearing many hats and learning to balance them with finesse. After accepting the offer to direct the play competition, I have discovered the same thing.

Before holding auditions at the end of November, I worked hard to provide information for the students, create a schedule, and mentally prepare that all this organization that I have been trained in would be ignored…and for the most part, I was right. :) The mere concept of an audition sign up sheet was a struggle. But auditions were amazing! These students are used to auditioning with a “ready” show to then perform the next week. They came in with lines memorized, props, and even set pieces. My expectations were set so low that they wowed me!

Out of the 11 auditions, we chose 9 productions to compete. The past 3 weeks my life has revolved around rehearsing with these shows, coaching their vision, and teaching basic theatre technique (i.e. project your voice, face the audience, etc). Scheduling went completely down the drain as I expected and I adapted to the China week-in-advance method, complete with cancellations and double-booking. I more than tripled the hours I spent at school in a week and often had to schedule mealtimes into my planner. I found myself not only coaching but painting sets, sewing costumes, and editing scripts.

Despite minor frustrations and exhaustion. I would not have traded this experience for anything! The highlight of each day was working with the actors (107 total) and their hard-working student managers. I fed off their creativity and was amazed to see their growth.

I would say the most difficult aspect was the language barrier and lack of authority in this culture, especially when it came to production week. I planned a formal dress rehearsal on Thursday night and  tried to implement it as such…full costumes, set pieces finished, sound, lights, etc. But of course, China is not that organized :) So naturally, on performance night on Friday additional materials popped up…extra set pieces I had never seen before, a spot light, additional microphones, “surprise” dance numbers, etc. It was quite interesting! Similarly, I had been coaching and directing these students for the past 3 weeks but there was also a Chinese teacher organizer giving direction and to make it more complicated, the competition is sponsored by the Student Union so the president was making calls as a technical manager with the walkie talking. Both the teacher and president were giving direction in Chinese, so most of the time I didn’t know what they were telling the student to do- haha! It was a great learning experience, especially in “stepping back.” It was difficult to not have control over the theatre space or the process due to my college theatre experience.

Overall, I learned to respect the vision and respect the process. There were many times that I did not agree with the design of a set piece, staging as directed by a student manager, or the organization of the competition. And while I gave my personal thoughts (and fought strongly for a few things), ultimately the final decision was not up to me, and therefore I had to respect and move on.

So like most shows that I have been part of, it’s end is bittersweet. I am ready for more sleep and rest but sad that my work with the students is over. Temporarily, that is. I’m already looking forward to next year!

Please enjoy these photos of the process! (I apologize for the terrible quality of the production photos taken via iPhone) 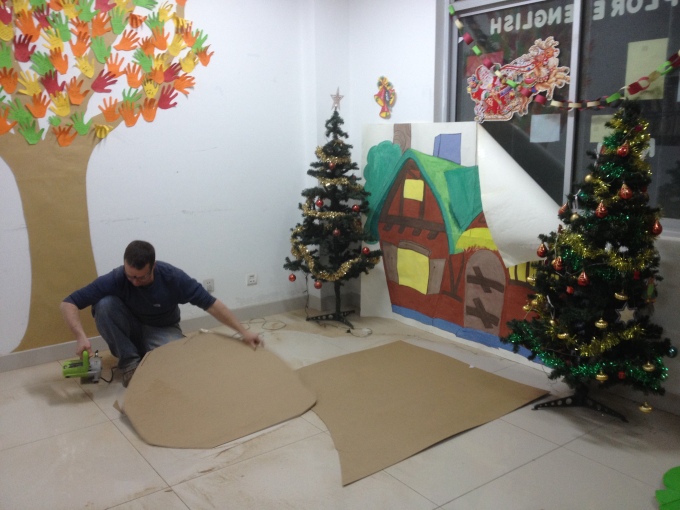 Where do you do your set building? Room 515 in the English Department of course! 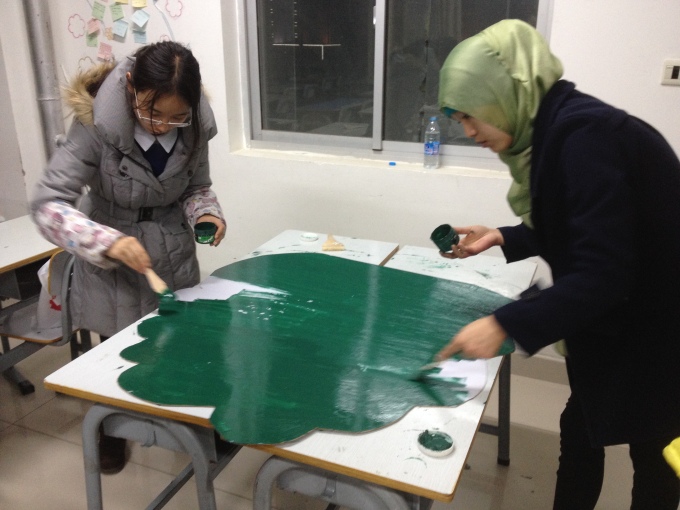 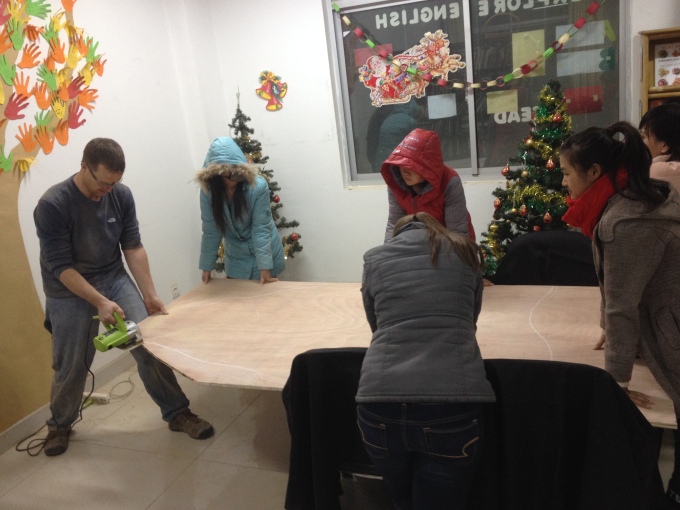 Maybe this space wasn’t a great idea…sawdust everywhere! Literally. But the mountains had been carved! 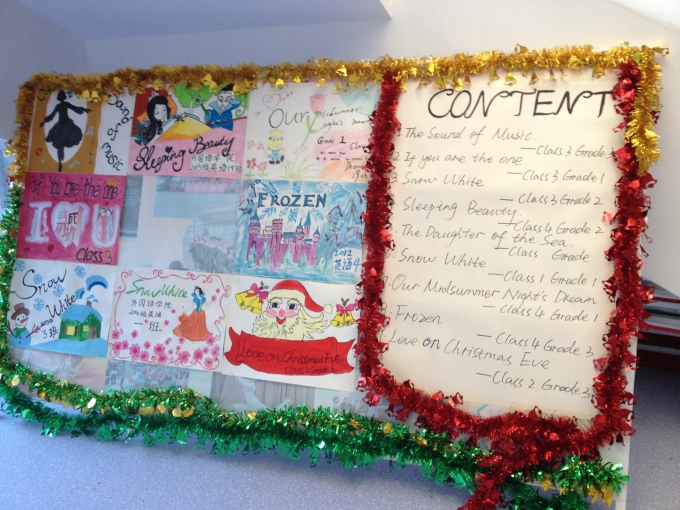 The line up for the evening 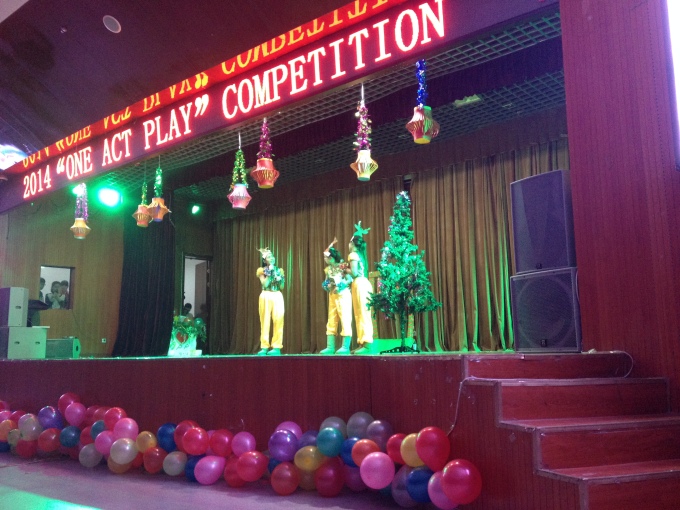 “Love on Christmas Eve” or the story of the matchstick girl. This production won 1st place! 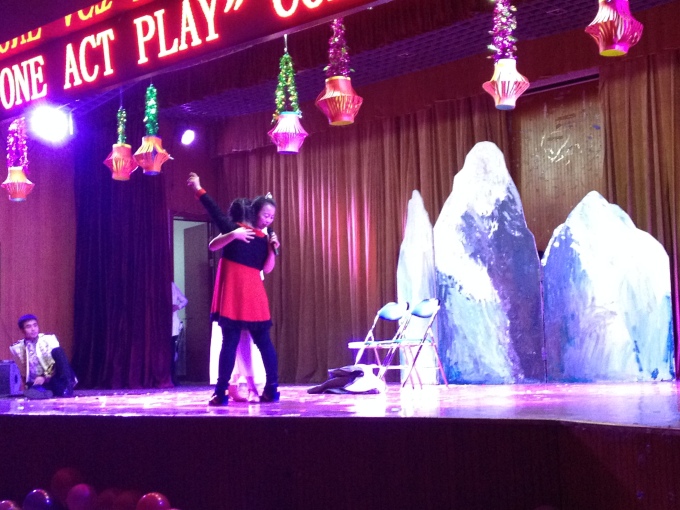 “Frozen”…and act of true love! These students painted a green mountain on 1 side and snowy mountain on the other to portray the change of weather! 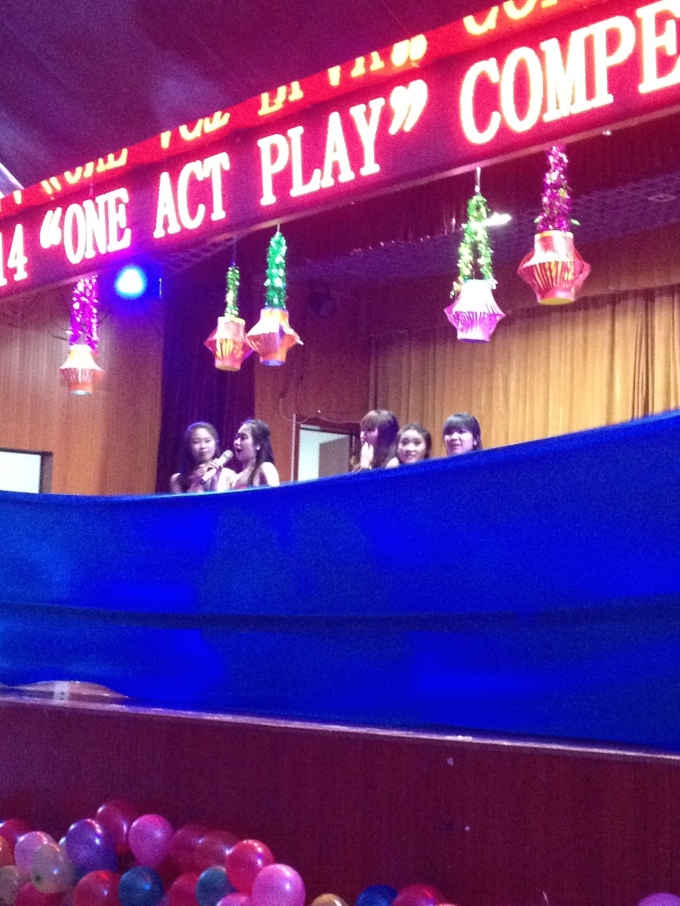 “Daughter of the Sea” aka The Little Mermaid. Here the mermaids are rising above the water. 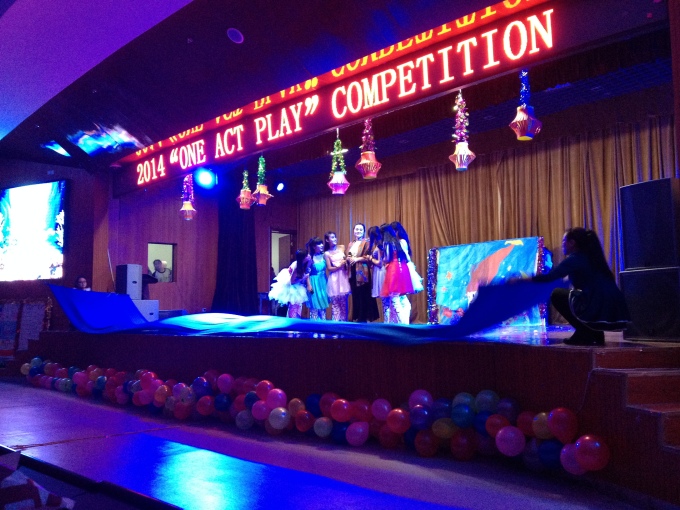 Stylistically, this was one of my favorites! The fabric water looked amazing with the lights and with music! 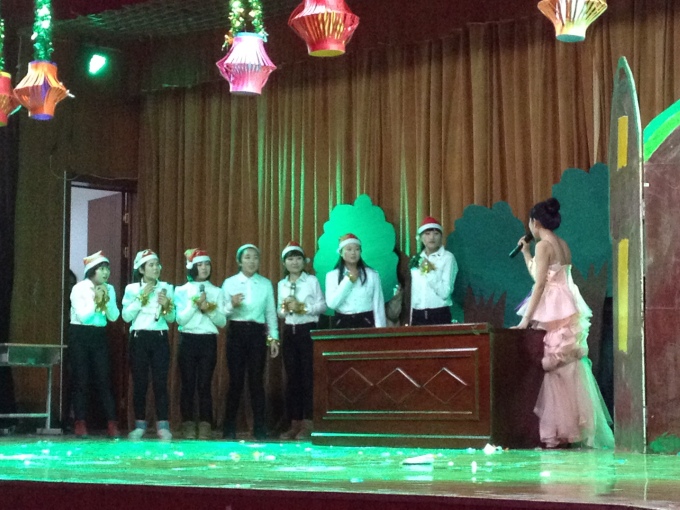 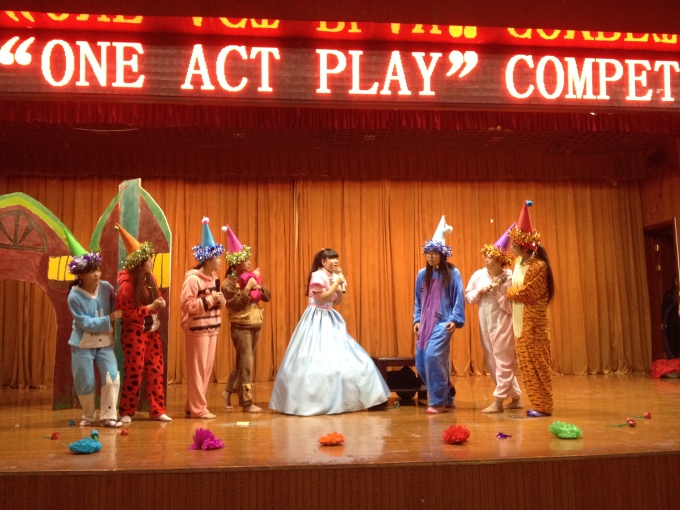 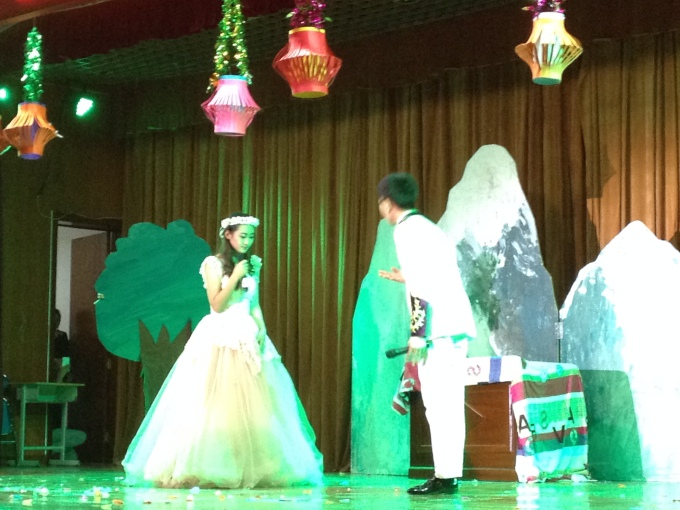 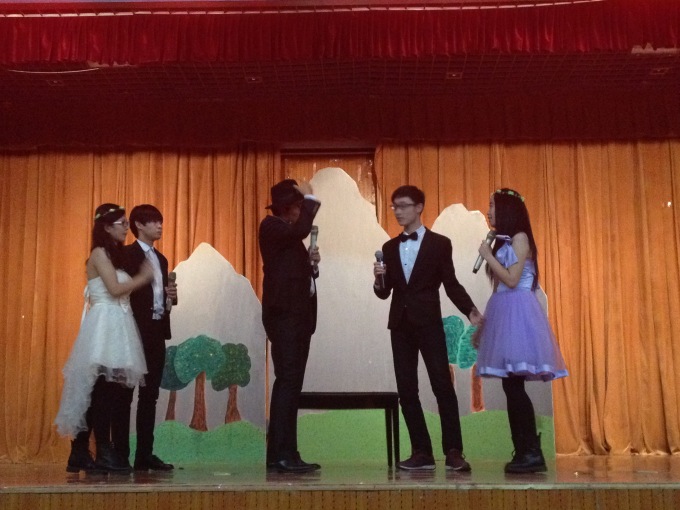 An interesting rendition of “Midsummer Night’s Dream”…have you ever seen a 10 minute production of this Shakespeare classic? (I don’t recommend it). 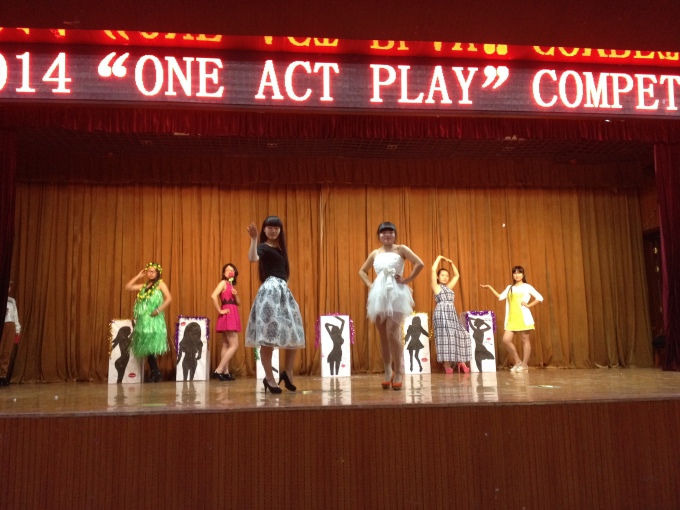 “If You are the One” a production based on a popular Chinese dating show! One of my favorite productions…though I may be biased considering they are my students :) 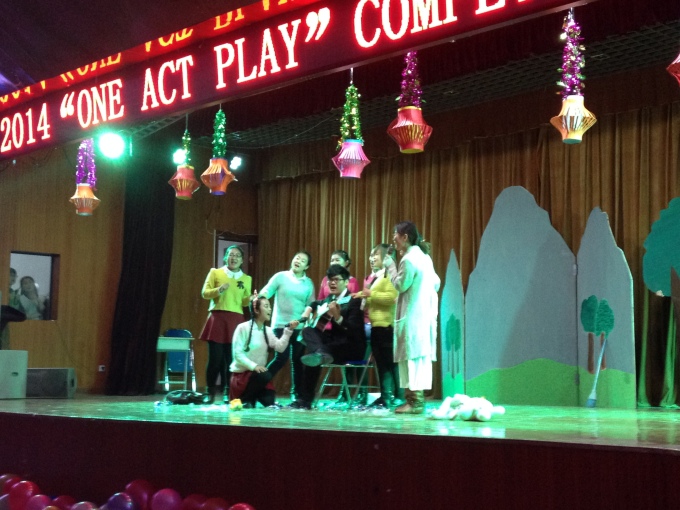 The final Do-Re-Mi of “The Sound of Music”

And just for kicks and giggles…..the students seem to like a funny and childish take on things. There were multiple times that I questioned decisions made on stage…respect the vision :) 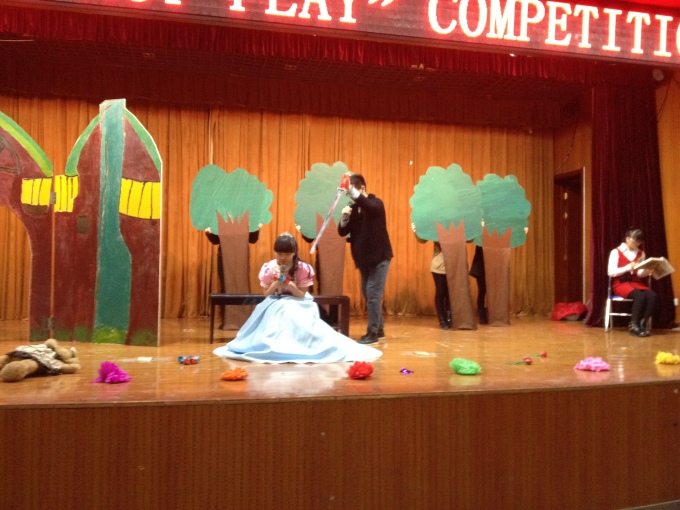 This is the scene in Snow White where the hunter is trying to kill Snow White, but can’t. Please take note of the stuffed teddy bear in the Left corner. After Snow White runs away, the hunter stabs this poor teddy to take the heart to the queen! On performance night, this teddy bear turned into a huge stuffed dog…uh?? 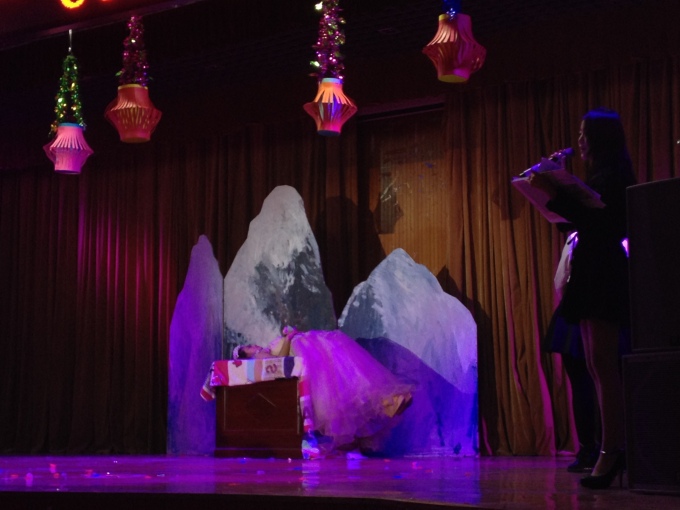 Sleeping Beauty is in a deep sleep awaiting her true love’s kiss. When she wakes up, she is going to need to see a chiropractor!

Check out these links for more pictures!