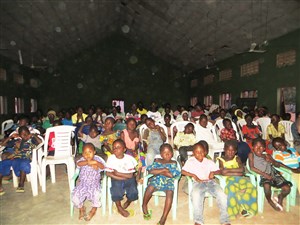 The Roses Hotel in Abuja was a lovely place where we slept Friday night. We rose early on Saturday and visited the building site of the Bishop Peter Dabale Memorial United Methodist Cathedral currently under construction.

District Superintendent and Cathedral Senior Pastor Mathew Dangombe provided a tour of the construction and time to meet with many of the leaders of the church including the chair of council on ministries, lay leader, among others.

United Methodists comprise the smallest sect of protestant Christians in Abuja. Even so, this unfinished church hosts 700 for worship each Sunday and leaders say that those numbers would rise to 2,000 or more if they had a completed place to worship. The church is a general agency Advance and the Nigerians are seeking partnerships from their United Methodist sisters and brothers from around the world.

Once the tour and meeting were complete we headed for the airport. The church tour took enough time we cut short our time to get to the airport. As luck would have it, we were directed to the wrong airplane terminal. We were shown great hospitality once a sizeable tip was generated so that we were guided quickly to the proper terminal.

Oddly as we approached the plane, we could see the baggage carts. One of a traveler’s last acts before boarding the MedView Airline plane is to check to be sure they have all your baggage!

The weather is hotter in Yola than in Abjua, but still very bearable as compared to the frigid temps being experienced at home.

We were greeted by Benji, the director of the orphanage, Rhoda Barawani, Magdiel Yaro, the head teacher; Sheru Bametu, a teacher; and several of the students.

It was a grand reception and then we piled into two vehicles and began our journey to Jalingo (2+hours).

Not more than an hour outside of Yola the van with the children experienced an electrical problem. A passerby on his way to Jalingo was paid to take the children home and the rest of us continued. Magdiel and Sheru stayed with the vehicle and called for a mechanic.

Our first stop in Jalingo was to the guest house where we were treated to a fine lunch of chicken, stew, rice and fruit. We then went to the orphanage and greeting all the children who were gathered in the auditorium. Jim Miler was particularly impressed by the number of students since his last visit in 2007. Each of us was given an opportunity to greet the students. The students responded with applause and big smiles. It was dusk so the light was getting dim and our time with them was short.

We talked with them about the work we planned to do over the next week. We plan to take photos and biographies to update our current records. We will also learn more about the replacement plans for the burned dormitory.

New blocks have been set on the top and a layer of cement support has been added to the corners and top so that a roof might be reaffixed. The plan is to clean and replaster the inside walls and paint. The electrical system will be checked closely. There is also plan to check the electrical systems in the other buildings in the hope of avoiding another fire.

We will attend the Government Unity Chapel in Jalingo on Sunday located close to the guest house.