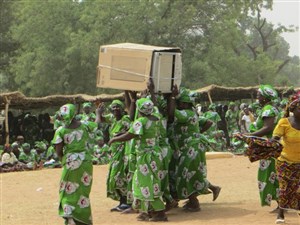 The women's revival went late Saturday so Sunday morning arrived quickly. We were off to the Sunday worship at the revival right at 8 a.m.

The women were already singing when we arrived. You could tell that many had left the night before to go home. However, there still remained many women to celebrate their work together. Many were gathering in the center of the arena circle singing and dancing praise songs.

The morning scripture was Roman's 8, but it was presented all in Housa so we can't share the content of her message.

Different groups sang hymns. Jim liked the style of the offering which is a procession of walking up to or by the offering container. Another unique experience for us was seeing the giving away of prizes to district UMWs who raised the most money for the event. The total raised for the event was 5 million naira.

Bed mattresses were given away as prizes as were refrigerators and a freezer. When a district name was called, many of the women from that district would come running, yelling and screaming, sometimes they would lift their president up on their arms as with an athletic victory. Then they would all take the award item back to the rest of their district group.

Once the main portion of the service ended, the words of appreciation and awards began.

Following the recognition of the event planners we began our journey back to Jalingo, again via cross-country.

We have a number of photos, the crossing of the Benue River (pronounced "Ben-way") was most eventful as the ferry coming and going looked like marginal vessels at best. But have no fear, we made it coming and going and it was quite a beautiful site. On our journey back we experienced farmland, cattle, trees, small vegetable farming, the planting of rice and many stories from Bishop Yoanna as this area of Nigeria is where he grew up and where much of his family remains. He stopped at several United Methodist churches along the way to bring greetings.

We thought the ferry ride was exciting, and while the expanse to cross was smaller, the bridge looked even more suspect than the ferries, but it carried us to the other side. It was a very dusty day, like the dry sandhills with a summer wind (although the part of the day at most was a cool breeze). All this to say we were covered in dust upon our return to Jalingo. The shower and meal were very much appreciated.

We praise God for the witness of so many spirit-filled women and the commitment of the Nigerian church in the midst of so many challenges. The challenges of travel, weather, food and water make everything they do completely intensional. It is humbling to see their ministry in action, it truly is an active ministry where their lifestyle is the church.