Lumiere Bisisi is one of our Micah Corps interns this summer. He is a senior at Midwestern State University in Wichita Falls, Texas. He is studying political science with a minor in global studies. He joined the Micah Corps because of his passion for social justice. 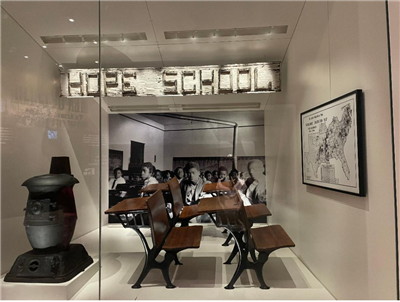 The museum itself shows the struggle that people who look like me went through just for me to live the life that I am living right now. The museum shows how Black people used to fight for their rights and most of the time the law enforcement would kick them back or use force against them. The museum also talks about what happened when the Civil War ended and how the Black community struggled to get the land that was promised to them by the government after they were freed. A majority of the Black people never got the land from the government, which then made them dependent on their former masters. That is why most of the Black families in the south stayed on their plantation even after slavery was over in the country. This was because of the lack of support from the government. Because Black communities didn’t have representatives in the government both at the state level or the federal level, this led some states to create laws that would make it hard for the Black community, most of these laws were actually created in the south. These laws included for Black people to pay a tax when they went to vote, making it harder for Black students to go to the same school as white students, or to play any kind of sports with Black kids. All this led to the start of the civil rights movements in the 1950s with Martin Luther King Jr. as one of its leaders. That was after more than 150 Black people had already been killed by KKK groups mostly in the southern part of the country.

The museum does not only talk about the civil rights movement, but it also talks about what Black communities have been able to achieve, especially when it comes to sports, business in this country, and politics. Some of the names that came out from the museum were some of the greatest athletes of all time; Michael Jordan, Kobe Bryant, Jackie Robinson and other players. Some of the politicians that were there are ones that have achieved a lot for the Black community, they have names like Kamala Harris, Martin Luther King Jr., Thurgood Marshall and the former president Barack Obama and his wife, Michelle.

I want to include some of the pictures that I took at the National Museum of African American History and Culture. The museum’s website has a lot of pictures and information to explore: https://nmaahc.si.edu/