In Layman's Terms: Amid leadership change, our mission to make disciples for Christ remains the same 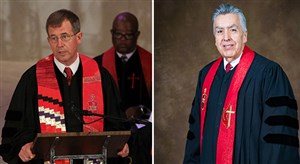 A rather major change is set to take place Sept. 1 in the Great Plains Conference. Thursday is usually not a day of the work week known for new ventures, but this Thursday, something that hasn’t happened in 12 years, at least in Kansas, is scheduled to take place: A new bishop will be the episcopal leader for this region.

We humans don’t like change all that much. Those of us involved in the church rarely truly embrace change. Music choices have evolved in many ways from organs to guitars. Preaching styles change whenever a new pastor moves in. Youth ministry philosophies have evolved from an emphasis on studying the scriptures almost exclusively to where the best of these groups involves some hands-on mission work. And then there is the age-old argument over where the coffee pot is located.

All of these things may change, and that means people will be apprehensive about whatever form the “new” parts take on in our lives. You may hear something like this: “A screen and projector in the sanctuary? A new worship service? An expectation to be part of a small group? That’s not how we do church around here!”

Sept. 1, if you don’t know, is the date when bishops assigned to new areas begin their ministries there. Bishop Ruben Saenz Jr., who was elected to the episcopacy during the South Central Jurisdictional Conference in July, becomes the new bishop in the Great Plains Conference. Bishop Scott Jones moves to the Texas Conference, in the Houston area.

For United Methodists in Nebraska, this might not be such a big deal. After all, it was just four years ago that Bishop Jones became the episcopal leader for Nebraska in anticipation of the upcoming merger of the Kansas East, Kansas West and Nebraska conferences. But for the folks in Kansas, this change may be somewhat monumental.

For 12 years, Bishop Scott Jones was the person people in Kansas looked to for leadership, encouragement, compassion and the teaching of the Gospel. Think of how many people have been commissioned and ordained with him at the helm of their annual conferences. My guess is there are dozens of pastors and hundreds of people – if not thousands – in Kansas who have only known Scott Jones as their bishop.

But that changes Thursday, Sept. 1.

Change. There’s that word again. Don’t be scared. The Bible tells us that big changes in leadership are nothing new.

Deuteronomy 31:7-8 tells of Moses calling upon Joshua to assume leadership of the Hebrews as they prepare to enter the Promised Land. This isn’t a simple passing of the baton. Remember, Moses was the only leader the Hebrews alive at this time had known. To learn more, we have to travel 39 years further into the past.

In Numbers 14, we learn the people – the same ones who had seen the miracles of the Red Sea parted, bread appear on the ground in the morning and quail fly into camp as a food source – expressed great fear and lack of faith when spies who had been sent into Canaan gave their reports. Only Caleb and Joshua stood firm in their belief that God would deliver them.

Numbers 14:6-9 paints the picture for us: “And Joshua son of Nun and Caleb son of Jephunneh, who were among those who had spied out the land, tore their clothes and said to all the congregation of the Israelites, ‘The land that we went through as spies is an exceedingly good land. If the Lord is pleased with us, he will bring us into this land and give it to us, a land that flows with milk and honey. Only, do not rebel against the Lord; and do not fear the people of the land, for they are no more than bread for us; their protection is removed from them, and the Lord is with us; do not fear them.’”

Unfortunately, the people continued to rebel, so later in that chapter we learn that God decides the adults who failed to show faith – all but Caleb and Joshua – will not enter the Promised Land. Despite this much-anticipated land being within reach, the people must wander as nomads for more than a generation.

I’m not implying the people of the Great Plains are unfaithful. I’m not saying they aren’t willing to follow God’s commands.

But I do think there is a parallel in the change of leadership. Bishop Jones wasn’t here 40 years, but he was here a long time. People who were used to his style of doing things, used to his personality and used to his priorities will have to respect and remember those aspects of life under his leadership. Allow the good memories to give comfort if you miss him and his wife, Mary Lou Reece.

Some things may stay the same. Some aspects of ministry may change.

But remember this: The mission to take the Promised Land didn’t change when the transition was made from Moses to Joshua.

So also our goal of making disciples of Jesus Christ for the transformation of the world doesn’t change in a transition from Bishop Jones to Bishop Saenz.