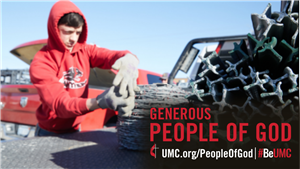 Donations from Great Bend First UMC’s Christmas Eve services were used to help farmers who were impacted from what the National Weather Service called “a record-breaking, and historic, wind event” on Dec. 15.

According to reports, approximately 366,000 acres burned in Ellis, Osborne, Rooks and Russell counties. Farmers lost fencing, as well as cattle, barns, other outbuildings and homes. One farm family was left with the clothes they were wearing, a small outbuilding and a few cattle, having lost their home, barns, outbuildings and cattle, one person reported.

The church’s donations of $2,015.25 were used to buy barbed wire, fence posts, water hose and gloves, all items not usually covered by insurance but needed to help get farms back into operation. A cash donation of $750, received after the Christmas Eve services, was also sent to help with needed supplies.

Larry Gale headed the team, which included Bill Carpenter, Lexi Deines, Kaden Deines, and Shane Boultinghouse, which worked the last week of December to obtain the items and take them to the Paradise United Methodist Church, which is serving as a staging area for donated supplies.