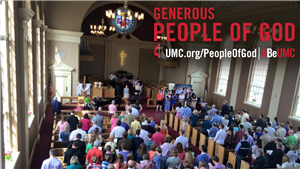 Just before worship services at Fairway Old Mission UMC in early March, the Rev. David Livingston saw an email from Bishop Ruben Saenz Jr. that the Great Plains Conference was donating $25,000 to UMCOR for Ukrainian relief.

But by the time he reached the sanctuary, he changed his mind. Old Mission was in the midst of a $2 million capital campaign (for building improvements including a new HVAC system, as well as 10% for The Hub Argentine and the Good Faith Network), and Livingston didn’t feel right about asking church members to dig deeper in their pockets. So, he lowered the goal to $10,000.

When the Easter offering – traditionally given to organizations outside the church – was counted, there was more than $29,000 raised. Money is still being recorded, with Livingston confident the amount will be more than $30,000.

“The people of Old Mission continually amaze me with their generosity,” Livingston said Wednesday.