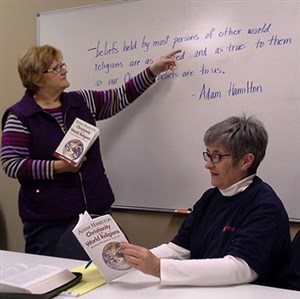 I am a come-lately to the United Methodist Church. I was a member of another Protestant denomination who married a lifelong Methodist. My husband didn’t want to join my church, citing some of its positions on social issues, so I joined his.

As I came to know the United Methodist Church, I saw that its theology and values aligned more closely with what I believe than the church I grew up in. As I learned more about the United Methodists, I was proud of its long history of activism on social issues.


From General Conference to those of us sitting in the pews

It wasn’t until a couple of years ago that I read “The Social Principles of the United Methodist Church.” As someone who doesn’t have experience with the inner workings of the church, I was pleased—and a little surprised—at the wide range of issues on which Methodists have taken a stand. Who knew that we have taken a position on governments’ responsibility to provide health care? Or where we stand on labor unions? I didn’t. And I’m pretty sure the majority of rank-and-file Methodists who fill the pews each Sunday don’t, either. All of this got me to thinking about how well we have done in putting our principles into action.

Some issues are taken up by individual church members or small groups with a passion for a particular cause, such as the death penalty or human trafficking. And every church has a missions committee that deals with social problems. But as a church, we have not been supporting our positions on social issues in a systematic way that engages our members and brings about change in our society.

For many years I worked in government and social service organizations whose goal was to help disadvantaged people. It was apparent that some of the things we do — with the best of intentions — are, in fact, not helpful. Some are downright harmful. Many others provide only temporary relief for short-term problems and immediate needs. Short-term fixes can’t solve long-term, complicated problems and can in some cases make a bad situation worse. But we keep doing them because it’s what we’ve always done and because it makes us, the helpers, feel good.

We needed a plan

A year ago, Aldersgate United Methodist in Wichita formed a new group to put our social principles into action. It was important that this be its own team rather than part of another committee. Our intent is to work with other groups, both within our church and in our community. Our goal is to work on projects that will bring about sustainable change and empower the people we hope to serve.

It was important to our new social justice team not to step on the toes of other groups in our own church. Aldersgate already had an active missions committee. But missions committees are mostly involved in the “mercy” side of “mercy and justice.” In addition to sharing the Gospel, mission committee activities tend to focus on immediate needs. In the case of homeless people, for example, mission committees may run soup kitchens or distribute warm gloves to people living on the streets. All of these are important activities that meet the immediate needs of homeless people. But these efforts don’t address what should be our ultimate goal of finding ways to help people stop being homeless.

Among other activities, we envisioned a social justice team involved in activities such as petitioning local, state and federal officials and agencies to provide access to mental health services or low-income housing as a way of solving homelessness. Both the” mercy” approach and the “justice” approach are important and are intended to help the same people, but in different ways.

We knew when we started our social justice team that attracting members was not going to be easy. Advocacy is hard work. Providing lunches to at-risk kids when school isn’t in session is immediately gratifying. It’s often a fun activity that addresses an obvious need and builds camaraderie among the volunteers. In contrast, volunteers working on social justice issues by calling, writing letters and emailing elected officials may not see results for a long time, if ever. It can be hard, frustrating, discouraging work, but it’s work worth doing.

For most societal problems, there is no magic bullet. Using a variety of approaches to address social concerns increases the likelihood of bringing about lasting change. Ideally, our social justice team will have opportunities to work with other groups on the same issues but from a different angle.

We know there may be times when the goals of other groups may conflict with those of the social justice team. In his book “Toxic Charity: How the Church Hurts Those They Help and How to Reverse It,” author and activist Robert Lupton cites many examples of how, with the best of intentions, we put our efforts into projects that disadvantaged people neither want nor can benefit from. Our team’s efforts are aimed at empowering the people we want to help. If we can convince lawmakers to raise the minimum wage, low-income wage earners may be able to buy their own groceries rather than relying on food banks or public assistance.

Another potential land mine for our social justice team is that not everyone agrees with the positions taken in our social principles. Our team has taken it slowly in choosing projects that will build consensus whenever possible. In the past year, we conducted voter registration drives in our narthex between services. This attracted people from the neighborhood surrounding Aldersgate as well as members of all political persuasions in our own church. We offered classes on Adam Hamilton’s book, “Christianity and World Religions” as a way to create understanding and tolerance among our members in a time of strident racial and ethnic public discourse. We’ve teamed with the “Read to Succeed” program to improve literacy among at-risk students in a low-income school, and we’re working on a letter-writing campaign to raise the minimum wage in Kansas and nationally.
During Lent, our pastor, the Rev. Gary Brooks, will teach classes on the Social Principles, open to our members and anyone else who’d like to learn more.

Advocacy: It’s what we’re called to do

There are those who think social justice issues are too political and that churches shouldn’t get involved. But in Proverbs 31:8-9, God’s people are clearly called to be an advocate for those who need our help: “Open your mouth for the mute, for the rights of all who are destitute. Open your mouth, judge righteously, defend the rights of the poor and needy.” In the New Testament, Jesus is constantly speaking truth to power, which is why the Romans feared Him. It’s clear that Jesus expects us to follow his example and do the same.

When the Rev. Kalaba Chali, Mercy and Justice coordinator for the Great Plains Conference, attended one of our meetings last fall, he said Aldersgate’s social justice committee was the only one in our conference of which he was aware. We hope that will change soon. We know we can’t bring about change by ourselves. There is strength in numbers, and we need the strength of every church in the city of Wichita to be heard at the city level, every church in the state to be heard in Topeka and every church in our denomination if we hope to effect change at the national level and in our world.

We believe every United Methodist Church needs a social justice committee whose responsibility it is to support and promote our church’s positions on social issues as a way of defending the rights of people in need. Please join us in pursuit of justice.


Deb Umberger is a member of the social justice team at Aldersgate United Methodist Church in Wichita.
Subscribe to GPconnect