Odyssey Mann is from El Paso, Texas. She is a sophomore at Southwestern College in Kansas majoring in Philosophy and Religion with a minor in music. She joined Micah Corps because of her passion for justice and passion for Christ. 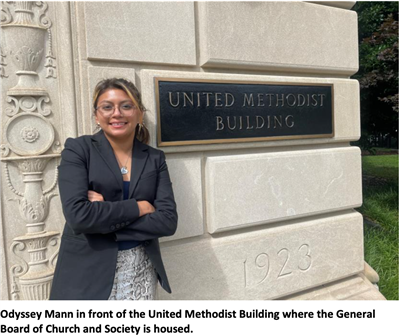 We were finally here. In the city of politics, government, justice, history, and hope. The capital of the United States of America. Everywhere I looked there was passion. It’s contagious because it moves you to speak, to feel, and to listen. Taking it in for the first time was like a dream. I had seen pictures of these places, but there they were, right before my eyes. I was breathing, seeing, and experiencing it all for myself. I could look up at the Capitol building for hours. I knew the building would not move yet I could feel movement in myself. A country that upholds only a specific group of people, yet as a little brown girl, I felt like I could make a difference here. We started Friday by making our way to the African American Museum. Every time we passed by the Supreme Court my chest expanded. Seeing people protesting, and celebrating, was a lot to take in. A lady came up to me and Charlotte and talked to us about their cause. "Rise up" was the name of their organization. Leaving that place was a hard thing to do, but we had to go. Little did we know that history would happen in just the hours that followed.

The African American Museum was informative and inspirational. I learned so much and had hope leaving that place that maybe things can get better. While admiring Jackie Robinson, I was informed of the news of the overturning of Roe vs. Wade. The atmosphere of where I was changed. It became cold. Despite celebrating the progress America has made to marginalized communities in that museum, it felt as if we had gone backward. So many people are going to be hurt by this decision. The rest of the day was an anxious one. I will never forget seeing so many people in front of the Supreme Court. I heard AOC's (Alexandria Ocasio-Cortez’s) voice in that group of people. She was speaking. Her story has given me so much hope as a brown girl in this country. Maybe, I can make a difference. That Friday is a day I will remember for the rest of my life.

My favorite museum was the Native American Museum. The American History museum was a memorable one too. I learned so much about this country and was always left with hope. That's what Christ gives me, hope. Working with the General Board of Church and Society in The United Methodist Building was on my bucket list. I can officially say I have been there and met some great people along the way. Every single person we met inspired me in some way. I was most moved by the slam poetry at the end of it all. I write almost every day. I journal, I write letters, I write emails, I write poems, and my personal favorite, I write songs. Yet, I had no clue what to write about. Not because of my lack of topics, but because of the variety of them. I ended up writing about people and passion. I called it, "Everyone Else." I was shaking to my core when all the eyes were finally upon me. I was finally given the microphone and after fighting so long to be heard, there I was, speaking while others were listening. As I sat down, Charlotte pointed at the goosebumps she had after I read it. Maybe I did have a bigger impact than I thought. Later on that day, Maddie told me that she was moved by my poem. Perhaps, my voice is important. I learned a lot this week about this country, myself, and about my voice. In a world where there are millions of voices, which one will you listen to? I seek justice, I seek peace, and I seek God. This past week was one of the best of my life. I'm so grateful I got to experience it. There is so much brokenness in the world, but passion, hope, and love remind me that best of all, God is with us.

“Everyone Else”
by Odyssey Mann
Passion
I see it everywhere
I see it as I look around, on this historical ground
I can feel it in my chest and in my breath
The impact it has on me
The way it calls me to action
The way it moves me to speak
Passion is contagious and consuming and can quickly,
Divide