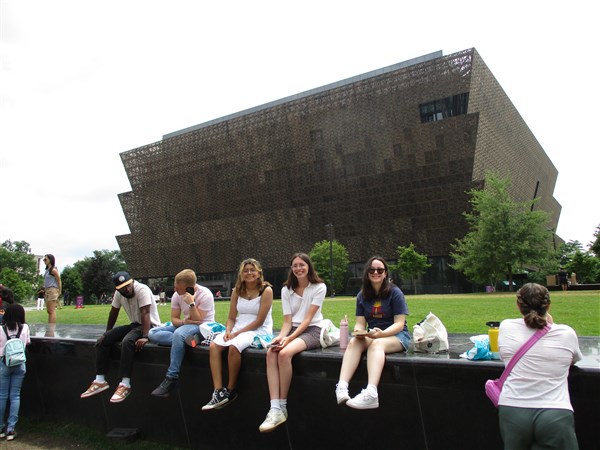 Photo: The interns by the National Museum of African American History and Culture

John Finch, one of our Micah Corps interns this summer, is a sophomore at the University of Nebraska in Omaha majoring in sociology with a concentration in inequality and social justice. He is originally from Ukraine and moved to the United States at the age of 15. He joined the Micah Corps for a second summer as he is passionate about helping people who are in need by working for justice for all.

Washington, D.C., is 12 square miles bordered by reality. This statement I pondered enroute to Washington, D.C., while in the airport of Eppley Airport in Omaha as I was waiting to board our plane to experience how justice, advocacy and politics are all intertwined together. I had never been to Washington, D.C., before, but I knew that this is the epicenter of where our futures as a nation and where societal norms are set. I must confess that the trip was nothing that I anticipated it to be but served as a wealth of historical knowledge that is rarely spoken about in the societal structures that I am a part of.

Day Two for me was by far the most important experience for my journey in life. This was the day that we experienced the traditional traveler’s visits to the National Mall and experienced all of the tourist’s stops to the museums and monuments. As a non-native to the United States, this was a place that I had only heard about in textbooks and in passing from those who have ventured to our nation’s capital. In all we visited 11 landmarks that caused me to ponder the reality that existed outside this small 12 square miles. The best museum by far was the National Museum of African American History and Culture. It was great to see how the contributions of a race that has been systematically oppressed and considered less valued have been raised to show the many accomplishments that have been attained by African Americans in our society. The vibrant history that pointed towards the greatness and strength of God’s beloved people was breathtaking when the mainstream society still shows that black lives really don’t matter.

If you are unable to travel to Washington, D.C., to visit this museum, take a virtual tour and learn about this history at: https://nmaahc.si.edu/