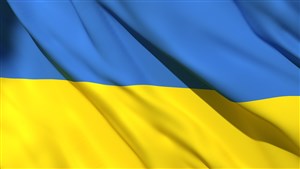 As a new pastor in western Kansas, Scott City to be exact, I was amazed to see signs around town which said, “Pray for Ukraine.” As I started to settle in, I realized there was a HUGE heart here in Scott City for Ukraine because of a local resident by the name of Anya. Anya met her American husband Joel as they both served as missionaries; I know there is more to their story and, over the coming months, I hope to learn more. They have lived in Scott City for around 11 years now. When the war broke out, it affected all the community because of Anya’s connection and friendships in this western Kansas town with a population around 4,000 people.

Members at the First United Methodist Church formed a prayer group that has met almost every Sunday afternoon since the war began. This small group of prayer warriors spends anywhere from 30 minutes to an hour connecting, praying for the war to end, and for Anya’s family, who is still in Ukraine. I have been able to attend two of these prayer gatherings since starting in Scott City on July 1st, and I have felt the Holy Spirit’s presence in these prayer times.

Another amazing revelation during my first days here was the support which the local Ministerial Alliance has provided for relief efforts in Ukraine. Through Anya, the local churches have connected with a ministry group from Ukraine called Lesnik Ministry Partners, which Sergey and Ellina Lesnik founded. They partner with Samaritan’s Purse to provide food, medical supplies, and other needs to the refugees in country. Through the connection with this ministry, the Scott County Ministerial Alliance has provided $48,000, which helped to buy a vehicle and begin construction on a living space for up to 200 displaced women and children, along with other needs. Scott City First UMC has also collected almost $9,000 since the beginning of the war to help the Lesniks with other needs for their mission to bring critical supplies and the Gospel to the people of their homeland.