In Layman’s Terms: Story of Lazarus provides wealth of thought about God’s call to us all 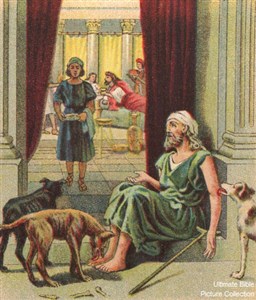 There’s nothing like the death of a family member to make a person reflect on his or her own mortality – and their need for Christ in his or her life.

This past week, one of my uncles passed away after a bought with Alzheimer’s disease. I used to spend quite a bit of time with him when I was a kid because he took my cousin and me fishing and to Kansas City Royals games. He even coached my cousin’s baseball team for a time. But in the years since my adolescence, I’ll confess that I had barely spoken to him.

Still, his death sparks both the sorrow for loved ones he left behind and joy for the reminder that with our passing from this earthly life lies a new beginning, at least as long as we’ve accepted the gift of grace open to all through Jesus the Christ.

It’s amazing how often scriptures will reach out and touch you when you allow such an encounter to happen. I rarely look at the lectionary readings for the week, but I did this week and came across a parable from Jesus that can be looked at in at least a couple of ways: squandered opportunities to build a relationship with God and failure to help the less fortunate among us.

The Gospel reading this week comes from Luke 16:19-31. It’s a parable Jesus told after addressing the Pharisees over issues surrounding money. I’ll summarize.

A rich man whose name we aren’t told and who apparently dresses in purple and ate “luxuriously” dies at about the same time as a poor man with nothing, named Lazarus. The description of the rich man is important because only the very wealthy could afford to purchase purple linen in biblical times. The process to create that color was simply too time consuming and, as I understand it, required an artisan’s touch.

We learn that Lazarus was so poor that he “longed to eat the crumbs that fell from the rich man’s table.” The implication is the rich man had seen Lazarus’ dire situation and chose not to do anything about it.

When the two men die, the tables are turned. Lazarus is said to have been carried by angels to the side of Abraham, a first-century illustration for the paradise we call heaven. The rich man is “tormented in the place of the dead.”

While enduring the pain that comes with eternal damnation, the rich man sees Lazarus with Abraham and calls out to the Jewish patriarch. This man who did nothing to ease Lazarus’ pain has the gall to ask for Lazarus to dip the tip of his finger in water and cool the rich man’s tongue.

Abraham breaks the bad news: “Child, remember that during your lifetime you received good things, whereas Lazarus received terrible things. Now Lazarus is being comforted and you are in great pain.”

But it gets worse for the rich man. Abraham goes on to explain a great crevasse separates the place of paradise from the place of damnation. That crevasse, I believe, is a reference to sin. Our actions constantly separate us from the love of God. It is only His faithfulness toward us and the gift of grace through the resurrection of Jesus that allows us to bridge such a huge gap.

At the time of this parable, the importance of obedience to Torah, or the law, was critical. The rich man learns one more lesson when he asks Abraham to send Lazarus to the rich man’s five brothers to warn them. This is what I call a “Jacob Marley” moment from the Charles Dickens book “Scrooge” – a warning to shape up to avoid a dreadful fate.

It’s then that Abraham tells the rich man what we as Christians have come to know as the importance of making a commitment to God during our lifetime. To the rich man’s request, Abraham says, “They have Moses and the Prophets. They must listen to them. … If they don’t listen to Moses and the Prophets, then neither will they be persuaded if someone rises from the dead.”

In other words, they’ve been given the information they need to make a decision. It’s up to them to decide.

As a person who has been a United Methodist for more than 20 years now but grew up in a Baptist church, I understand the implications. I heard many a Baptist sermon end with the words “If you were to die tonight, do you know where you would end up?” We don’t say those words very often in our United Methodist churches. I wonder if we should say them more.

I acknowledge that this is scary stuff. This is a scary subject. But it doesn’t have to be.

Jesus accomplished two things with this parable. First, he helped people understand the need to show compassion to the people less privileged to us in this lifetime. Second, he helps people understand that they have to choose whether to follow the ways of the world or the path that God wants us to follow.

What does God want from us? I think He wants us to be the means by which people see Him in the world today. That means helping the Lazaruses of the world that we encounter each day. It also means not to be bashful about sharing Christ with others and, therefore, provide the hope of better tomorrows for people who see so little joy in the world of today.

You could help a person use the power of the cross to rise over that crevasse by sharing the love of Jesus with him or her.