In Layman’s Terms: We are called to be modern-day prophets 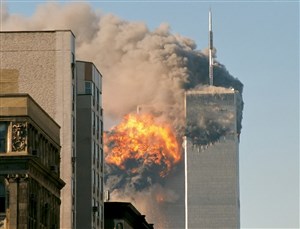 Maybe your calendar says it, too. On Sunday, Sept. 11, my calendar makes a reference to “Patriot Day.”

As much as a few of my friends would like to think that’s a reference to the New England Patriots kicking off the NFL season this weekend, the reference is to a far more sobering event in our nation’s history: the 9/11/01 terrorist attacks on the United States.

I’ve heard it said may times that each generation has a defining moment. For my grandparents, it was Pearl Harbor. For my parents, it was the assassination of President John F. Kennedy. For my generation, that moment is 9/11.

It was a Tuesday morning, and I had just settled into the recliner in our St. George, Utah, home to eat my customary breakfast of cereal – probably Golden Grahams or Frosted Flakes. I turned on the television just in time to see the sign-off of the morning program from the NBC affiliate in Salt Lake City. Bruce Lindsay, a man I came to know a little bit because of the media circles in which I worked, made reference to a plane hitting one of the World Trade Center towers. He encouraged viewers to stay tuned to the “Today” show for more information.

Sure enough, “Today” started with coverage of this tragic event. Anchor Matt Lauer was talking on the air via telephone with a witness when a second plane hit the other tower. I don’t recall the woman’s name, but I remember her speculating that there must be some serious problem with air traffic control.
I knew right away something bigger was going on, so I bounced up right away, got dressed and headed to my office at The Spectrum, the newspaper in town. As the editor there, I spent those first few moments setting up a call with our best reporter, who was in our Cedar City bureau, and with key staffers there in St. George.

Amid the trauma that was starting to set in – the realization that our nation was under attack – we put together what turned out to be a solid coverage plan for the next day’s newspaper. This was 2001, just prior to widespread use of websites for news organizations our size, so all of our effort was put into what we would roll on the press that night.

Of course, that started just a series of incredibly long days as we told the story about the senseless deaths of thousands of people in New York City, in Washington, D.C., and in a field in Pennsylvania. We told the story through the eyes of a surprisingly large number of people from our area who happened to be in New York and in the nation’s capital that day. We lived relatively close to the Hoover Dam outside Las Vegas, and in those days immediately after the attack there was considerable concern about attacks on our water supply and damage to infrastructure.

It made for some unsettling days.

Each of you has your own story about that day and the uneasy weeks and months that followed. But I do want to share one aspect of life in the media: It is true when people tell you that you can focus on the job so much that you block out the emotions. But that only lasts for a length of time before people have to let those emotions out. I had a room full of employees whose mental health became a very real concern over the latter days of 2001.

I share my story today because, as I write this, we are only days away from the 15th anniversary of 9/11. In some ways, that day seems like a lifetime ago. In other ways, it seems like it was just last week.

Perhaps one forgotten piece of that story of the attacks and the way the nation responded is the way our churches stepped up. Churches across the country hosted blood drives and took donations to help people rebuild their lives.

But, most importantly, our churches served as a place for people to find restored hope through the Gospel of Jesus Christ.

The church my wife eventually served in Utah consecrated its building the Sunday after 9/11. We attended that day because I was covering the story for the newspaper. Talk about timing!

All that really means is I can’t tell if we had more people attend worship because of the new building or because of 9/11. I suspect it was a little of both.
But for the rest of the country, we saw a surge in attendance in many places, sometimes with increases topping 20 percent in year-over-year comparisons. The attacks scared people, and when they were scared, they ran toward the church. The message restored hope. The environment of our sanctuaries made them feel safe.

Eventually, the dust settled at Ground Zero. The Pentagon’s walls were restored. Memorials were erected. Life returned to normal.

And our attendance numbers fell back to where they were on Sept. 9, 2001. Why did so many people who found hope in the church after a tragic event suddenly see no need for it?

I distinctly remember reading stories on this subject on the one-year anniversary. I designed a 12-page special section, and my team contributed to a USA Today project, looking at how life had changed over those 12 months. One story focused on our nation’s run toward faith in a time of tragedy and its relative complacency once their safety had been restored.

It’s sad, but it kind of reminds me of my reading of parts of the Old Testament. When the ancient Israelites were being conquered or felt hopeless, they cried out to God. We read in I and II Samuel, I and II Kings, and I and II Chronicles about cycles of time when God’s chosen people abandon their faith in him, struggle and then call back to Him when they are about to collapse.

Even during the two mass exiles when the Northern Kingdom and then the Southern Kingdom fall, God doesn’t fully abandon the people. And despite what I’m sure must be a disappointing result with the people who attended worship in the days after 9/11 ignoring the church now, God hasn’t given up on them, either.

In the Old Testament, we read about prophets being raised up to tell about God’s glory and to call people back into relationship with Him.

Today, we are those prophets. We may not have been granted visions or have messengers from God tell us directly what to say to the masses. But we are empowered with the Gospel of Jesus Christ and have been given an admonition by Jesus from Matthew 28: 19-20 to “Therefore go and make disciples of all nations, baptizing them in the name of the Father and of the Son and of the Holy Spirit, and teaching them to obey everything I have commanded you. And surely I am with you always, to the very end of the age.”

In other words, it’s up to us to call the people back to God. It’s up to us to be an inviting people, to make our churches a welcoming place, a safe place, a place – once again – where hope is shared.

So, this Sunday, when we mark the 15th anniversary of the devastating attacks of Sept. 11, 2001, let’s offer prayers for families whose lives were altered forever that day. Let’s mourn the dead.

And then let’s be the modern-day prophets that call the people back to God.