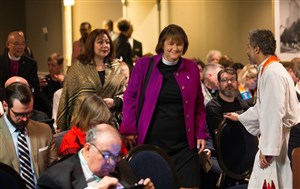 I don’t have a solution.

Those are ominous words. When I was the editor of a daily newspaper, one of the rules in our shop was that we didn’t go to our publisher – the top supervisor – to talk about a problem without at least some idea for a solution.

Yet, I find myself pondering one of our denomination’s biggest concerns – no, it qualifies as a problem – and can’t come up with a possible solution. I find solace in the fact that other, much smarter people than me find themselves in the same situation. That also makes me nervous. But even in that state of unrest, I know I’m far from alone.

I’m speaking, of course, of the challenges The United Methodist Church faces regarding homosexuality. But I’m not talking about the angle of the topic that so many people seem to be dwelling on right now, especially with the Judicial Council hearing this week regarding the election of Bishop Karen Oliveto, who is serving the Mountain Sky Area.

Bishop Oliveto was elected by the Western Jurisdiction. Soon thereafter, near the close of the South Central Jurisdictional Conference in Wichita, Great Plains lay delegate Dixie Brewster stood to make a motion asking the Judicial Council to rule on the legality under church law for Bishop Oliveto’s election. Arguments this week in Newark, New Jersey, centered on the predictable semantics of the two sides in this argument. Supporters of the bishop argued the Discipline holds jurisdictions autonomous in elections and that it fails to specifically prohibit a clergy person from being in a same-sex marriage. Opponents of the bishop’s election argued that her marriage made her a “self-avowed, practicing” homosexual, which the Discipline prohibits from serving as a pastor and, therefore, as a bishop.

Outside the hearing, Facebook posts, Tweets and other digital communications told of people praying, singing and even talking to each other.

What a great concept!

I am not trying to wrap my brain around arguments that have been discussed for decades. Is homosexuality a sin the church can forgive in a pastor, like we do alcoholism or divorce or other challenges pointed out in scripture? Or, even if homosexuality is a sin, should any transgressions be cast aside in favor of the love for all people and the call to avoid judgment provided by Christ in the Gospels?

In truth, the compelling arguments for both sides have made me a fence-sitter. I struggle mightily on this subject and pray each day for discernment of God’s will. I see people in the LGBTQ community who love each other and seem to have figured this marriage thing out better than many heterosexual couples I know. I also tend to hold clergy – right or wrong – to a higher standard.

But my biggest concern is that I see too many people focused on winning for their side of the argument and not enough on what is the will of God in this matter.

To the people on both sides who feel like they know how God feels about it, I commend you. Heck, I’m envious. I wish I was where you are in the process.

For now, I am not quite there yet. And like many, I hold out hope that the Commission on a Way Forward, a group of 32 people selected to discuss and make recommendations on this divisive matter, will find some kind of compromise that allows the big tent that is The United Methodist Church to live up to the “united” in our name. I will continue to pray daily for the members of the commission, the Judicial Council and the Council of Bishops and other leaders – not for one side or the other in the debate, but that God will let flood their souls with the Holy Spirit to enable them to discern God’s true will in these matters.

In my mind, that way it’s not a matter of who wins and who loses, but that we are set right on the path to God’s will for humankind.

As I struggled with this subject this week, I reflected on two passages in scripture.

The first is 2 Kings 22. In this chapter, a young Josiah becomes king of Judah, the southern kingdom. We are told 18 years into his reign that the temple apparently is looking run down and needs renovation. While working on this restoration project, the high priest, Hilkiah, finds what he calls the “Instruction scroll.” Some scholars believe this was a long-forgotten scroll of what we know today to be part of or the entire book of Deuteronomy. Josiah tears his clothes in despair because he realizes upon reading the scroll how far God’s chosen people have strayed from their Creator.

It would be easy to make the leap that I chose an Old Testament passage to hint at choosing a side in the debate over human sexuality. Not true. As I said, I struggle with the subject. It’s simply an illustration that sometimes we get too certain of ourselves and forget to seek God’s will. I think that’s part of what happened in ancient Judah. Josiah hoped to set his people back on the right path with God. They needed to read this forgotten scroll to discern God’s will for them.

The second scripture is probably more familiar, John 3:16-18. In this story, Jesus is wrapping up a conversation with the Pharisee Nicodemus. This Jewish leader has a question about eternal life. Jesus informs him that he must be born anew, from the Holy Spirit. Jesus then goes on to tell Nicodemus that the son of God with whom he is speaking is the key to eternal life and that Christ didn’t come to judge the world but to save it.

I know this scripture has become kind of cliché because we see posters with “John 3:16” written on them at sporting events and in other venues. But I think these verses are important because they help us define our mission as the church, the mission that oftentimes gets lost amid the legalistic wrangling we experience, such as what is going on this week in New Jersey.

Please understand I’m not trying to make light of the issues the church if facing or discounting the passion with which people approach these difficult conversations. These kinds of decisions greatly impact people’s lives. That’s no laughing matter.

But I truly want the church, first and foremost, to be the light in a continually dimming world. Imagine the energy we would have for ministry, to lead people to Christ so they, too, can experience the hope of eternal life that we have as followers of Jesus if we weren’t divided over legalistic arguments.

But don’t pray for one side to win and one side to lose. Pray for discernment. Pray that we will, in some way, find our lost scroll, that we will find God’s will written out for us going forward.

Then, we can focus on the mission of making more disciples of Jesus Christ so the message of a Savior coming to earth to save us not only spreads around the world but settles in the hearts of men and women everywhere.