In Layman's Terms: A prayer that a fire rekindles the Spirit in many 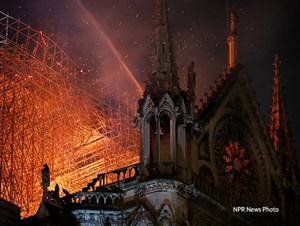 My news alerts started firing off on my phone and watch in fairly rapid succession Monday. The Notre Dame Cathedral in Paris was burning.

I’ve never been to Paris. It’s on my bucket list, along with about a dozen other European sites to satisfy my craving to see the world with my own eyes. But the cathedral that lost its roof and its iconic center spire in a major fire apparently caused by construction is one of those structures that many people know by sight on television or in pictures before having to be told what it is.

Built way back in the 12th and 13th centuries, Notre Dame was one of the gems that survived from the Middle Ages and is one of the most popular tourist stops in the entire world with an average of 30,000 people a day visiting the cathedral, according to the Associated Press. It served as home to one of the world’s most treasured art collections and to artifacts believed by some to be a piece of the cross used to crucify Christ, as well as His crown of thorns referenced in John 19:2.

I don’t know about you, but my Facebook and Twitter feeds were filled all day Monday with people expressing sorrow at the loss of such a historic church. It started with Catholic friends, advanced on to other Christians and even to some people about whose beliefs I’m not all that certain.

The point is people do tend to appreciate history — especially when the history dates back almost 900 years. They are stricken emotionally when things of intrinsic value are damaged or lost.

Luckily, the iconic towers were saved. And according to a New York Times article Tuesday, the building is considered to be structurally sound, which contradicted earlier television reports.

Fires are almost never good, unless they are built on purpose to keep us warm and to clear fields for planting. But I think it’s appropriate — almost poetic — that such a cultural treasure and historic building suffered this kind of damage during Holy Week.

Cardinal Timothy Dolan, Archbishop of New York, perhaps said it best when he pointed out that the church — lower-case “c” — burned, but the Church — upper-case “C” — continues to do the work of Christ in the world.

In other words, the world lost a cultural treasure, at least in part, to the flames. But the world did not lose the Church, the people who believe that Jesus Christ is Lord and Savior of all, the son of God who came to reconcile us to our Creator and who taught us to reach out to unbelievers and to stand up for the marginalized in all corners of the world.

Jesus healed the sick who in their day would have been outcasts. He ate with sinners, the despised of their communities. He showed mercy and compassion to people who were seen as the pariahs of their cities and towns.

He was crucified, His ministry attempted to be burned down by religious leaders who failed to understand Him and so were afraid of Him. But we find out in Acts 2:1-4 that a symbol of destruction, flames, also can be seen as symbols of a burning to share the good news of Jesus Christ in the world.

“When the day of Pentecost had come, they were all together in one place. And suddenly from heaven there came a sound like the rush of a violent wind, and it filled the entire house where they were sitting. Divided tongues, as of fire, appeared among them, and a tongue rested on each of them. All of them were filled with the Holy Spirit and began to speak in other languages, as the Spirit gave them ability.” (BibleGateway.com, NRSV)

Fire was the symbol not of destruction, of an end, but instead the symbol of a beginning of something new and even better.

I suspect that is what we will find rise from the ashes of the Notre Dame Cathedral. Who knows how many people walked or drove by that cathedral every day who failed until Monday’s fire to notice or care that it was more than an old building? It was a house of worship. Perhaps the fire that destroyed can rekindle a passion to follow Christ by serving as a reminder of the building’s purpose.

French President Emmanuel Macron already has pledged that the cathedral will be rebuilt. The billionaire Pinault family reportedly has pledged more than $100 million to go toward the restoration effort. Undoubtedly, there will be more donations to assist.

I pray that the building will be restored as a treasure of our shared history of faith. I pray that the city of Paris will once again have this beautiful Middle Ages structure to open to the public for tours, reflection and worship.

But above all, I pray that we realize the church — again, small “c” — means nothing, even with iconic windows, towers and relics, compared to the work of the Church. After all, Jesus didn’t say to go forth and build buildings in His honor. He said to “Go forth and make disciples.”

This week we celebrate the resurrection of Jesus, the cornerstone of our faith. He gave birth to His Church to reconcile the separation between flawed humankind and God.

Rebuilding a church — even a historic cathedral — damaged by fire doesn’t seem nearly as important or difficult.