In Layman's Terms: After election, remember to put Kingdom over country 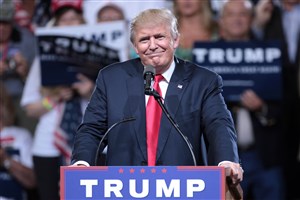 The reactions to the 2016 presidential election have been almost as amazing as the result. Businessman Donald Trump defied almost all odds to win the presidency. Pundits are analyzing county-by-county results to see how Hillary Clinton failed to defeat a man who won in a most unconventional way – by insulting people of entire races, nationalities and gender.

Of course, Clinton’s ethical issues regarding emails and classified information did her no favors. As a result, millions of Americans viewed the former host of the TV series “The Apprentice” in a more favorable light than Clinton.

Undoubtedly, about half of the country woke up Wednesday morning elated at the result. The other half feels crushed.

Presidents change. In fact, our constitution requires a vote every four years. Lawmakers in the House and Senate change based on the will of the people who take time to vote.

But there is good news for both sides in this political fight! Our God – our creator, our salvation, our hope – never changes.

Yes, people change. My hope is they will continue to do so – to love more, to help the marginalized, to speak up for people who have been beaten down by life.

That can start with you and me. But we have a long way to go.

Anyone who checks their Facebook account knows how far so-called Christians have fallen away from following what Jesus identified as the greatest commandment in Matthew 22:36-40:

While our nation has been blessed with the peaceful transition off power since George Washington decided to turn over power in 1797, vitriol remains a constant in American politics. I’ve seen the statements and memes posted by friends and even some of my family members as the election drew closer and as the results of the election became clearer throughout Tuesday night. They may think they’re being funny, but they’re really helping drive the wedge further into an already divided country.

I had a sixth-grade teacher named Roxie Whitaker. Mrs. Whitaker was an African-American woman who stood all of about 5 feet, 2 inches tall. She was cool, at least in my 11-year-old mind, because she drove a yellow Camaro. But one of her lessons to our class has stuck with me for a very long time. The context for this is that a boy had done something to hurt a girl in our class: “If your words and actions don’t do anything constructive, then they are a waste of the brain in your head. Be better than that.”

In other words, don’t stoop so low as to demean others. Unfortunately, I’ve seen a lot of demeaning statements in this election, and they seem to have ramped up by Trump supporters since his victory.

Beyond a regression to an elementary-school mentality, I can’t seem to figure out why. It seems petty when we have a nation and world that are rife with problems.

The reality we all face – Republicans and Democrats, Trump supporters or Clinton backers – is that today 45 million Americans woke up this morning in poverty. That means they don’t know from where their next meal will come, if they will have a roof over their heads tonight or what the future holds for them. Some are unemployed. Many don’t know how to break the cycle.

We also face the reality that despite having a winner in the presidential race, we are really a 50-50 country when it comes to political ideology. Clinton won the popular vote by a narrow 151,000 votes. Trump won the Electoral College vote.

In business, as we’ve seen in government, a division prevents growth.

I have come to believe over the years that if our nation – indeed, our world – is going to truly be transformed, it will come because of the church. I’m not talking about an institution but a group of people unified in mission and witness. Instead of spreading rhetoric about political ideals, we need to be spreading the message of hope through Jesus Christ.

I’m continually shocked by the number of people who call themselves Christians but fail to live up to the virtues that should be associated with that label. Quite often it come from the argument that they are standing up for what is right for their country.

My question is simply this: How about standing up for what is right for Christ? I love my country, but over the years I’ve finally matured to the point that my Savior comes ahead of my nation. The cross is more important than the flag. The Kingdom of God should soar above a nation of humankind.

That said, what happens next? The U.S. Constitution and our traditions as a country show that now we move toward a peaceful transition of power. President-elect Trump will choose leaders for Cabinet positions. But the bulk of the activity happens in January, when newly elected representatives and senators will be sworn into office, and the new president is inaugurated.

Followers of Christ don’t have to wait that long. What happens next? We do what we’ve always done, what we’re supposed to be doing. We embrace our tasks – privileges, really – to love God, love our neighbors and make disciples of Jesus Christ for the transformation of the world.

How we do those things starts with those words from Matthew 22 and continues with the words from the Old Testament scripture in Micah 6:8.

"He has told you, human one, what is good and what the Lord requires from you: to do justice, embrace faithful love, and walk humbly with your God."

When we recognize our true leader – not an earthly president but an omnipotent, omniscient, omnipresent king – always was, is and will be, we can find comfort regardless of whether we agree with the results of an election or not.

So, join me in praying for our new president:

Gracious God, grant our new president, Mr. Trump, with wisdom. Give him compassion. Help him usher in peace. Grant him courage to lead in the principles shared by Jesus. Help our nation to live up the words of love found in your Scriptures to love others, to do justice and, always, to walk humbly with our God. Amen.