In Layman's Terms: Amid turmoil, a prayer for leadership, peace and love 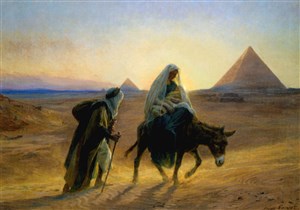 Well, it’s certainly been an interesting couple of weeks since President Donald Trump was sworn into office, huh?

Some people have celebrated the series of executive orders that have flowed from the Oval Office. Others have lamented the rules those orders have put in place. It is kind of interesting how people cope with the change in leadership. Some people I know who voiced outrage in opposition to executive orders issued by then-President Barack Obama, often citing too much power in the presidency, are not voicing that same opposition to President Trump ruling by what amounts to presidential decree. I mean, if it wasn’t right for one president, then it isn’t right for another president, right?

Politics has been an interest of mine since high school. As a journalist for 20 years, the last 15 of those as the editor of a newspaper in Utah, I often would use my column on Sunday mornings to voice my concerns, urge people to action or, in many cases, ask for patience and peace to envelope whatever situation we were facing at the time.

I was known by most people as a fairly middle-of-the-road commentator, not so much because of my position but because I would dare to give voice to the other side’s argument in my column. It was not unusual to field calls Monday morning from leadership in the local Republican and Democratic parties – both convinced I was in error not because of facts I had provided but because I wasn’t firmly on their side of the issue.

Many people like to think the world is black and white. I think it’s really various shades of gray.

Take the immigration issue that arose Friday, Jan. 27, when President Trump issued an executive order shutting down immigration to the United States for several months from seven predominantly Muslim countries. I have friends who think this was the right thing to do to preserve the safety of the country. After all, they say, President Trump is at least actually fulfilling his campaign promises. Yet, I have friends on the other side who are adamantly opposed, citing Galatians 3:28 (there is neither Jew nor Greek) and the parable of the sheep and goats found in Matthew 25: 31-46 in which we are told during the judgment we will have to answer for whether we fed the hungry, clothed the naked and visited the sick and imprisoned.

For the record, I fall firmly on the side of welcoming refugees. From a purely emotional standpoint, I pray that if any such calamity as has befallen the people of Syria were to happen in the United States that some country – a safe harbor away from tyranny and war – would allow my wife and children to enter.

From a biblical perspective, I look to Leviticus 19:33-34. This scripture provides instructions from God to the people of Israel.

“When immigrants live in your land with you, you must not cheat them. Any immigrant who lives with you must be treated as if they were one of your citizens. You must love them as yourself, because you were immigrants in the land of Egypt; I am the Lord your God.”

Then, if that wasn’t enough, I think about Matthew 2:13-23. It’s a story that points out that Jesus was a refugee. He and His family had to flee to Egypt to escape being murdered by a government concerned with sustaining power.

No wonder Jesus calls us to welcome the stranger, to provide the necessities of life and, of course, to show love to that person. He lived through the experience. Sure, He was just a young child, but that doesn’t change the fact that our Savior was in the same circumstance as people fleeing Aleppo in Syria or tyranny in any of the other six countries cited in the temporary ban on immigration.

I realize tensions on this subject are high. People are speaking without thinking and hurting people they don’t intend to harm. It’s representative of our political divide these days.

So, rather than sermonize more about the topic or go on a rant, I want to offer a prayer – a prayer for our new president and, perhaps most importantly, for us.

I’m not asking that he or anyone else adopt my way of thinking, or any other way, for that matter. I share my prayer below and ask that you share your own prayer in the comments area. I just ask that you keep Romans 12:18 in mind as you comment: “If possible, to the best of your ability, live at peace with all people” – another piece of instruction from God with no conditions.

I pray to you this day a citizen of a nation in turmoil. We, as a people, have allowed the issues of humankind to get between us. We are not living in harmony. We are not raising each other up. We have allowed our fears, aspirations for gain and pride separate us. And as a result, we are not preaching the gospel of Jesus Christ. We are not fulfilling the mission you gave us to make disciples of all nations.

I pray for peace – peace from wars and violence, peace from unrest, peace of mind from fears that we have allowed to set in and freedom from strife between others of your creation.

Help us all to recognize that we must follow Your teachings to love others – even those with whom we don’t agree. Help us to be mindful that we are all part of the body of Christ, so we must work together to move forward as a community of believers.

I pray for our leaders, especially our president and his advisers. Fill them with the Holy Spirit to guide their decisions. I don’t pray that they will choose one way or the other. Instead, I ask that You help them to discern Your will and to make decisions accordingly.

I pray that at all levels of government, you help leaders recognize injustices and that you help them champion solutions.

I pray that at all levels of government, you help leaders recognize which actions exhibit love for our neighbors and to take the required action.

I pray that at all levels of government, you help leaders understand what it means to be humble and that they embrace the idea of walking along side You, regardless of where they are in their own faith journeys.

In these days when we too often we let the politics of humankind dictate our actions instead of the mercy and hope shared in the gospel, help all of us who reside in this country – citizen or not; white, brown or black; Christian, Jew, Muslim, agnostic, atheist or otherwise; rich or poor – to rally to each other’s side. Raise up among us statesmen and women to lead. Raise up among us people willing to speak the truth and hold leaders accountable – not to an ideology but to You.

Help us to remember we are truly blessed to be a blessing.

Grant for us all the wisdom, strength and courage to do what is right, with Your will always at the center of our debates.

May the peace of Christ rain down on all of us. May we shower our neighbors with love.

May we be the example You want us to be in the world from this time forward.

In Jesus’ name I pray.