In Layman's Terms: At least Darth Vader was genuine 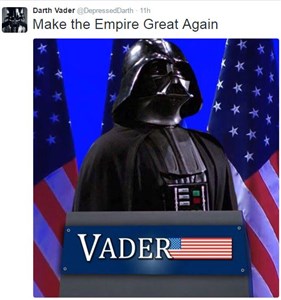 I hope you tuned in to the first presidential debate on Sept. 26 featuring Hillary Clinton and Donald Trump. I’m not advocating for either candidate, but instead simply hope people who intend to vote in November tuned in to see the candidates answer questions.

I watched the entire debate and immediately figured out the best way to see what people really were thinking was to listen to the debate from the television but to keep my eyes glued to Twitter. I know, some folks think social media is evil. Others appreciate it as a means of communication but don’t see it as a useful tool for real information.

I guess I look at it differently. For 20 years in the news business, I saw technology dramatically shift how we did things. I trained as an intern in Paola, Kansas, designing pages with proportion wheels, pica poles, Exacto knives and wax machines. When I left the business to come to the Great Plains Conference in February 2015, all aspects of page design were completed on the computer, and I spent as much time – probably more – thinking through the design of our website each day as I did the front page of the newspaper. Along the way, I moderated somewhere north of 20 debates for offices from city council to the U.S. Senate.

Social media software such as Facebook and Twitter didn’t exist when I started in the 1990s. Now, they are a fully integrated part of life.

Such was the case with the debate. As I listened and commented on the statements made by the candidates, I watched to see what others posted as well by following the hashtag #debatenight. I’ll admit to kind of enjoying snarky commentary, and there was plenty to go around that night.

Some people were quite serious in their commentary, pointing out lies or changes in positions of the candidates. Others were quite angry, such as political commentator and talk-show host Bill Maher. Others were just down-right entertaining, such as an account I started following that evening, @depressedDarth. The fictional Darth Vader account (warning, some language may be offensive) – the evil Sith lord of “Star Wars” fame – had the dark-side jedi promising to “make the Empire great again” and vowing to create thousands of jobs by building a new Death Star.

Of course, the election is really no laughing matter. I know people who are big-time fans of either Trump or Clinton and people who absolutely don’t trust either Clinton or Trump. As with all people, both candidates have serious flaws. Trump speaks in generalities and seems to change his story to fit the moment. Clinton has been caught in lies surrounding an email scandal.

Debates are supposed to help the public get to see the real candidates. I think we already may have seen the real Donald Trump and the real Hillary Clinton prior to the first debate, but I think they also were on display that night.

Regardless of where you stand in this election, I simply pray that you keep your eyes and ears open as we head down the home stretch to Nov. 8, Election Day. While candidates and their supporters may sound well-intentioned and may seem to have your best interest in mind, sometimes the word they use are simply to win over voters.

When I hear smooth-talking politicians, I think of Absalom from 2 Samuel 15. Absalom was one of the children of King David, and he apparently believed that he should be the one running the kingdom. Scripture tells us Absalom made himself look royal by obtaining a chariot and horses and then positioned himself just outside Jerusalem. When people came to the city gates to ask the king to address a concern, Absalom first found out if they were from a tribe of Israel and then gave his best political promise speech. Verses 2-4 tell us: “When the person said, 'Your servant is from one of the tribes of Israel,' then Absalom would say to him, 'No doubt your claims are correct and valid, but the king won’t listen to you. If only I were made a judge in the land,' Absalom would continue, 'then anyone with a lawsuit could come to me, and I would give them justice.'”

The implication, of course, is that only Absalom could solve their problems.

You’ve heard of politicians kissing babies? Absalom would bow down to these folks, take them by the hand and kiss them.

Scripture goes on to tell us that “Absalom stole the hearts of the Israelites.”

It didn’t end well for Absalom. His father, David, outwits him, and then David’s army routes Absalom’s forces. In a bit of getting what he deserved, Absalom gets tangled in a tree and is killed by a man he had wronged prior to raising up against his own father.

I’m merely suggesting that we pay close attention to what these folks have to say in these final weeks prior to the election. Put aside party affiliation and any likes or dislikes you have for the candidates. Start your analysis anew with Absalom in mind. Is what the person is saying true? Is this really the person? Or is it an act?

Compile your own thoughts on the candidates – not what you read or hear but what you see for yourself. And then vote on Nov. 8.

Of course, along the way, a prayer that God will help our country select the right person for the job at this time in history wouldn’t hurt!