In Layman's Terms: Discussion with a moderator for the Commission on a Way Forward 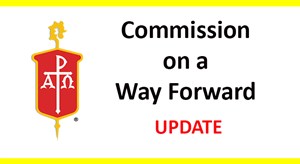 I used to think there was no more thankless job in all of The United Methodist Church than that of district superintendent. Now, I think it must be serving as a member of the Commission on a Way Forward.

God bless those 32 people, especially the three bishops serving as moderators, who agreed to take on such a heavy load.

That thought really hit home for me Oct. 26 when I took part in a conference call with approximately 40 communications professionals from annual conferences and other United Methodist-affiliated organizations. For a little more than an hour, Bishop Ken Carter, episcopal leader of the Florida Conference and one of the three moderators of the commission, answered questions related to the divisive issue of human sexuality.

I’ve come to appreciate Bishop Carter’s cool, smooth delivery in conversation and in presentations. He was no different this time as he worked his way through questions some of us offered during our time together. I don’t want to reinvent the wheel here, so for a story that details some key points of the question-and-answer time, please see the story by Heather Hahn of United Methodist News Service.

I haven’t written this blog for a while, but this topic and the opportunity to talk to one of the bishops leading the commission’s efforts motivated me to share a few thoughts. In no particular order, here are some of the topics that resonated with me during the call.

As a 20-year journalist prior to coming to the Great Plains Conference, this one has been tough for me. The commission has met in closed-door meetings in all five of its face-to-face settings thus far. In my time as a newspaper editor, my publications went to court a total of eight times to gain access to public records or to open what should have been public proceedings. We never lost, in part because we always carefully framed our arguments.

Bishop Carter was asked when the commission’s meetings would be open to the public, and basically he answered that they wouldn’t be. While I would like to see the commission’s actions as the discussion moves forward, the reasons behind the decision to keep them private make sense to me.

“As we’ve shared with the church, this is a global body of 32 persons,” Bishop Carter said. “In some instances, this is a group of people who have had experiences with each other that did not leave them to trust each other. So early on the work was relational work.”

With an issue that has eroded trust between so many people over the years, it stands to reason that a representative group of 32 people would reflect those trust issues. Closed rooms do allow people to speak freely, and I suspect “clearing the air” a bit likely has helped that group grow closer and willing to have some rather frank discussions.

There also is a very real issue regarding cultural differences. The United Methodist Church long ago ceased to be a U.S. church. It’s global in scope, and that means the debate over human sexuality that has simmered and boiled over in the United States is not necessarily a priority in other countries, such as those on the African continent. And that doesn’t even take into account whether discussion about such a topic as sexuality is even considered proper in some of these countries. In some places, mere discussion is taboo, let alone any talk about how sexual practices either conform to or contradict biblical teachings.

“There is a saying that insanity is doing your work in the same way and expecting a different result,” Bishop Carter said. “And the results we are getting is what happens in the open in public at General Conferences.”

Anyone who has witnessed the heated debate and hurt that is transmitted during those General Conference debates understands what the bishop is saying in that quote.

More information is available on the commission’s website: http://www.umc.org/who-we-are/commission-on-a-way-forward.

Bishop Carter indicated that more details would be shared as we move toward the end of 2017 and the start of 2018. Part of that has to do with the process.

One thing perhaps lost in all this is exactly who the commission reports to as it does its work. It’s not set up like an agency or general board. It’s an ad hoc group with a very specific task. And, as Bishop Carter made clear during the call, the commission is working for and reports to the Council of Bishops.

In case you’ve missed it, here is what the process looks like going forward: Bottom line: More details will come, but we’ll have to be patient. I appreciated Bishop Carter’s remark that the commission is attempting to fully listen and understand each other’s positions, and that is why the commission’s work is an 18-month process instead of a 30-minute floor debate.

One of my questions that Bishop Carter answered dealt with caucus groups. I asked if he thought groups representing various interests across the denomination were helping or hindering the process. My examples included the Wesleyan Covenant Association representing conservatives who want the Book of Discipline either to remain as is or, perhaps, to become even stronger; Reconciling Ministries Network representing people who want full inclusion for LGBTQ individuals; and the newer Uniting Methodists movement that seeks unity amid the differences people have on human sexuality.

Bishop Carter said the commission’s makeup means it has people who reflect some of the values of each of those three groups.

“But (commission members) all agreed to make their commitment to the work of the commission, and that is to try to find the way forward,” Bishop Carter said. “Some of those groups have a long history with each other, so they can come together and get their work done quickly. For the commission, our struggle has been to try to learn something new.”

That something new is to listen intently and to try to understand complicated positions on a delicate subject.


Is There a Way Forward?

It was clear that the bishop was not going to answer one of my other questions related to whether there was one model that was standing out above others. After hearing him speak, I respected his position on maintaining the group’s covenant and his own position about the spirit of working with the commission and didn’t ask it.

As he pointed out, there are large congregations within our denomination – congregations that by their size would indicate that they have people on all sides of the human sexuality debate – who have figured out how to live in unity despite their differences. He seemed to be making a point that the denomination could look to these congregations for inspiration.

I found that to be a spirit-lifting moment in this conference call. We should be focused on the local congregation, right? We’re supposed to be making disciples of Jesus Christ, and that takes place in the mission field, not in the offices of annual conferences, general agencies or even at Council of Bishops meetings. Sure, those groups can – and should – equip local congregations to do the work of Jesus in the world. But the local congregation is where the “rubber meets the road.”

Maybe the answer can be found in those churches.

One of Bishop Carter’s concluding remarks provides a means of remembering what we are called to do.

“I think I have to remind myself of this from time to time, and we remind the commission, that we are trying to change the frame of this discussion from one of division to ‘we’re trying to multiply our witness.’”

As I’ve said before, I envy the people who have figured out their position on the topic of human sexuality. I still hear incredibly well thought-out arguments on both sides, and now from in between. Right now, I tend to fall with the Uniting Methodists approach. But I’m still reading and listening to other positions.

We were told this was just the first of several opportunities to hear directly from moderators of the Commission on a Way Forward. I look forward to hearing more and will write after each of those opportunities as well.

And, as I hope you are doing daily, I will pray for the members of the Commission on a Way Forward as they work to find a way to preserve the unity of a church that should, indeed, be talking about multiplying the witness for Christ.