In Layman's Terms: Is your church ready for microphone changes? 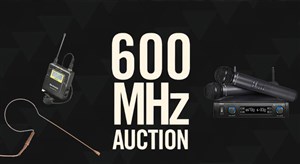 Wireless microphones have become as much a part of the worship experience as the organ and hymnals. Preachers who don’t want to be tied to a pulpit rely on these devices to allow them to move around to engage their congregation while delivering their messages.

But as our communications staff has reported before, the rules for use of some of these devices is about to change. And churches that haven’t budgeted for this occasion really need to do so quickly. Consider this post to be a friendly reminder.

In March 2017, the Federal Communications Commission authorized an auction in the 600 MHz band of frequencies, which falls within the broadcast television spectrum of the public airwaves. A large portion of those frequencies was purchased by cell phone carrier T-Mobile, which needs the added capacity to launch 5G service.

That’s good news for T-Mobile subscribers because it means better and faster coverage across the United States. It’s bad news for churches, theater groups and others who use wireless microphones that use the 600- to 699-MHz frequencies.

Why bad news? Because once the 600 MHz bands are used by the cell carrier and other auction winners, they are no longer legal to be used by others using those frequencies. So, not only could your church soon have tons of interference running through your sound system, making it unusable, but you could also be viewed as breaking the law.

Here’s a video we shot last year as a commercial to our "Harvesting the Great Plains" monthly program that provides more details.

How much time do you have to make the switch? Not much longer. In fact, some markets in the northeast already have worthless wireless microphones. More transitions to the auction winners will take place starting early in 2019, with full implementation expected by summer of 2020.

Some companies are offering rebates, where you turn in your old system in the 600 MHz range and purchase new equipment. This helps offset your cost but will not come close to paying for the new system.

You can tell if you even need to worry about this by first inspecting your equipment. Usually, you’ll find a sticker either on the back of a lavaliere microphone pack or in the battery compartment of a handheld wireless microphone. If it says the frequency is anywhere in the 600 to 699 MHz range, you need to be moving to a new system sooner rather than later.
In most cases, you not only need new microphones but the new receiver that allows the microphone to “talk” to your sound system. Good microphones start at about $200 each and go up toward $700. Reliable receivers start at about $1,200.

The strategy I suggested in that 2017 video may still help you this year: Buy one or two now, depending on you need, and plan to purchase another one or two early in 2019 – emphasis on the word “early” because there’s really no good way to know how quickly your area will fall into the transition schedule.

Read more from the FCC.