In Layman's Terms: Nothing fake about the good news of Jesus 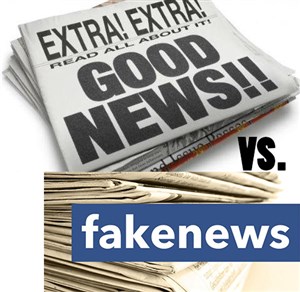 The sad reality of fake news hit a new low Dec. 4 when a 28-year-old father of two bought into a story he saw on social media about a Washington, D.C., area pizza place harboring children as sex slaves. The man drove six hours to confront the pizzeria owner, firing several shots from an assault rifle into the sky.

The man surrendered to authorities.

While this episode ended without anyone being physically harmed, this incident does put the recently hotly debated topic of “fake news” in the spotlight. During the recent presidential race, falsehoods flew in and out of headlines, some of them casting Hillary Clinton in a bad light and others doing the same to Donald Trump.

It makes you wonder what you really can believe when it comes to news coverage.

Fake news has been around a long time. The Onion long has used satire in sacrificing cultural sacred cows. A look on its website this week revealed the following nonsensical headlines:

There’s an Onion-like site with Christian themes as well, the Babylon Bee. Headlines on its website this week include: In these cases, just about everyone can tell the “news” is anything but real information. But on social media, you can’t be so sure. Fake news sites play to fears and passions of people on subjects such as immigration, guns and homosexuality. They also are clever in how they package the news, using website names close to the real thing but off just enough that it takes a person actually paying attention to grasp that this is fake news in disguise.
Unfortunately, people with a bias on politics – one way or another – take the bait.

In several instances during the campaign, I had to point out to Facebook friends that a post they had shared was false. No, the president doesn’t have authority or power to suddenly take your guns. No, thousands of refugees weren’t camped out at the border with Texas ready to take over entire towns. And while many denominations don’t condone same-sex marriage – such as the United Methodist Church’s official stance as of now – pastors of multiple faiths were not thrown in jail for refusing to marry a same-sex couple.

Sometimes, people are just trying to be funny. One April Fool’s Day when I was a newspaper editor in Utah, our outdoors writer put together a story about an alligator being found in a tiny river – in the desert. Yes, people should have known it was fake, and the overplaying of the date on the page should have given the joke away, but to play safe, a paragraph within the story let people know it was all a joke. Dozens of people called in or sent us an email to tell us how much they enjoyed the laugh we had provided – and how much mileage they had gotten out of the ruse with their friends. One person, though, was very upset. She took me to task for allowing the staff to do such a thing.

I still think it was kind of funny, and I only allowed it because I was certain such a thing reached Onion status – that it was so absurd that nobody would think it was true. One person did, and her words stuck with me, so we never did it again.

An alligator in the desert is one thing. Political dogma and sex trafficking are quite another. One can be humorous in an area of 105-degree heat for four to five months out of the year. The others have no humor value to them whatsoever.

All we can do is, dare I say, pay attention. We have to be discerning and not take “information” at face value. Pay attention to the source. Read or listen to what it has to say. Be critical in your thinking and see if what you are reviewing stands up to your scrutiny.

Thankfully, we don’t have to spend a lot of time pondering the validity of the news about Jesus. In this era of fake news and during the Advent season, I direct you to Mark chapter 1, which I like to think of as the “good news” chapter. The Common English translation starts out with verses 1-3 like this: “The beginning of the good news about Jesus Christ, God’s Son, happened just as it was written about in the prophecy of Isaiah: ‘Look, I am sending my messenger before you. He will prepare your way, a voice shouting in the wilderness: Prepare the way for the Lord; make his paths straight.’”

As I shared last week, John the Baptist is the voice in the wilderness preparing the way. John is arrested, and Jesus begins his ministry in earnest in verses 14 and 15: “After John was arrested, Jesus came into Galilee announcing God’s good news, saying, ‘Now is the time! Here comes God’s kingdom! Change your hearts and lives, and trust this good news!’”

In just five verses of chapter 1, we see the phrase “good new” three times, all in reference to Jesus.

As an adjective, “good” means “to be desired or approved of” or “having the qualities required for a particular role.” As a noun, it means “that which is morally right, righteousness” or “benefit of advantage to someone or something.”

As Christians, we know “good news” means the arrival of the Messiah, Jesus. And he fits all of those definitions of “good.”

Even people who don’t believe in Jesus applaud his teaching of love for others and care for the marginalized.

As Christians, we can continue put a little effort into ensuring the news we share is real. And we can do our best to live up to the example of love that Jesus set for us during his time on Earth.

Such an effort shows genuine respect for Christ. There’s certainly nothing fake about His love for us.