In Layman's Terms: Numbers and lessons from our town halls 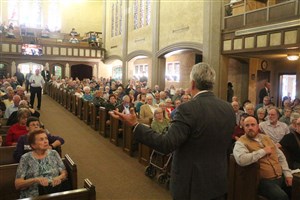 What a ride! Eighteen town halls in 17 cities in every district of the Great Plains Conference. In all, more than 4,100 people in attendance. Twenty-six delegates. Three plans. A few laughs. Not-so-few tears. Lots of prayers.

That sums up recently completed town halls journey I embarked upon with Bishop Ruben Saenz Jr. as he sought to educate people in Kansas and Nebraska on the three plans we know will be considered during the special session of General Conference in February in St. Louis.

One more statistic: 4,982 miles. That’s the distance traveled since the first town hall on Aug. 25 in Omaha and Lincoln and concluding Nov. 17 in Parsons and Lawrence.

And those are only my miles. Bishop Saenz traveled a lot more because of side trips he took on each trip either to preach or to meet with people in the mission field doing great things to serve as the hands and feet of Christ. I also must mention David Burke, our content specialist who served as our reporter for 14 of 18 of the town halls. He took many a side trip as well to tell stories of churches in action while he was in the “neighborhood” for a town hall meeting, often in other corners of the district.

It really was a great experience. I ventured into communities and churches I had never been before. I met some great people and interacted with men and women who are obviously concerned about the future of The United Methodist Church. These are people – on both sides of the human sexuality discussion – who are deeply committed to Christ.

Some of the best moments came as we were packing up after a town hall. Most people understandably flocked toward the bishop. But at almost every stop, at least a few people recognized the time it would take to talk to the bishop and decided I would suffice to answer their question or to hear their feedback.

I’ll freely admit that this was an exhausting venture. In most cases, I came away from a town hall worn down by the weight of the subject matter. I won’t go into detail here, but let’s just say that some town halls had a different tone than others. Some groups were more gracious – not surprising since we’re all human beings!

Some things I learned, was reminded of, or had affirmed along the way:

Don’t be afraid to make improvements – The PowerPoint presentation that we built to share the information turned out to 114 slides long, including the opening worship and communion slides. It didn’t start out that way. Early on, the bishop and I realized that more than a few people were confused about aspects of United Methodist polity, and the question-and-answer time with the bishop greatly reflected that point. Instead of getting to the heart of the matter during Q-and-A time, the bishop fielded questions about definitions such as jurisdiction, Book of Discipline and who votes at General Conference. We revised the PowerPoint to answer those questions up front, and after that the Q-and-A segments provided time for much more robust subjects on people’s hearts. In case you’re wondering, I have one more number for you: 24 is the number of revisions we made to those slides from start to finish, with the final product now on the conference website. If you click the link above, the PowerPoint will download to the "downloads" folder on your computer. It's shorter than the 114 slides from the town halls because I've taken out the slides for worship and the discussion times.

Resources are important – If you go to our resources web pages, you’ll see three documents that I had the opportunity to condense for people who simply don’t have the time to read the long documents that this process requires. One is a single-sheet, front-and-back document that compares the three plans and their impacts on various parts of the church. I don’t know that I had ever spent that much time on a single sheet of material in my life. But when you’re chiseling down a 93-page report into a single sheet, it takes a little time, attention to detail and multiple design attempts. I’ll admit to being kind of proud that this document now has been translated into Korean and Spanish and is being used by other annual conferences to help people comprehend the three plans. Thank you to everyone out there who helped me make revisions and clarify wording in the very early days of our town halls. What we ended up with – thankfully, prior to the translations and sharing via United Methodist News Service – was far better than the first version. Other resources that appear in a condensed version is a summary of the book “United Methodists Divided” and a summary of the reasons some petitions were ruled unconstitutional by the Judicial Council. More than a few people have been kind enough to send me an email or tell me in person that they appreciated the communications team’s efforts, and I appreciate you taking the time to tell us how you’re using those resources to inform your local church.

Backup plans are important – First, a big thank you to every church who agreed to host our “road show,” as David Burke and I called the tour. I’m happy to report that the projection technology worked quite well in all but two venues, where projectors and/or connections chose not to cooperate, in one case literally two minutes prior to our start time despite launching the software with no issues and staying that way throughout the gathering time. Hauling the portable screen and portable projector in the back of the RAV 4 I drove to most of these events proved to be worth the hassle of loading and unloading each week.

We’re all in this together – I understand anxiety is high right now. What I heard from many people throughout this experience was the voicing of fear of losing their church, however they define their context for ministry. Nobody who understands what the church can do as a connected group of local congregations can do together wants to see a split. I think that goes for most people who support ordination of LGBTQ persons and same-sex marriage. I think that goes for most people who believe the Discipline should be maintained or strengthened. I realize this may carry less weight coming from a person who works for the institutional church when I say we are stronger together. But I’ve lived it. I grew up in a Baptist church. At the time I attended there, it was fairly effective in its community by providing service. But it accomplished nothing remotely close to the positive impacts I’ve seen as a now-24-year member of The United Methodist Church. I was the editor of a relatively small community in southern Utah, where the Church of Jesus Christ of Latter-day Saints dominates, when UMCOR arrived first on the scene and provided tremendous assistance to people who lost homes in a flood that made headlines worldwide. I’ve seen people working for policy changes aimed at stopping oppression. And I’ve seen churches reach out across towns, over state lines and, indeed, around the world to share resources. That doesn’t happen in churches that lack connections.

I learned a lot more, but I won’t bore you with those details in this post, except to say that if there was any doubt before, I can confirm that we have a loving, caring bishop. He treated everyone with grace – even if they tried to back him into a corner with a statement framed as a question. And he takes his consecration vows to maintain the unity of the church in the bonds of peace seriously. If he didn’t, it would have been far easier for him to spend time with his family on weekends over these past three months and just steer people to a website filled with documents. Some bishops are hosting only a few gatherings. Others are only addressing submitted questions that can be vetted ahead of time and addressed with institutional answers. Our bishop took questions live from the audience. I’ve moderated enough U.S. Senate and House debates from my first career as a newspaper editor to know that taking unscreened questions on a heated topic takes guts and grace.

The learning won’t end, either. If you missed out on attending any of the town halls, we can at least help you get the information shared in those settings. Eugenio Hernandez, our multimedia production specialist, set up a nice multi-camera recording when the bishop took part in the Topeka District’s town hall on Nov. 11. You can see the information via this recording. At that link, you’ll also find links to download the PowerPoint presentation and the single sheet that compares the three plans.

We'll keep adding to those resource pages. For example, we're finishing up a frequently asked questions document that provides answers to inquiries made during the town halls and, in some cases, asked via emails to the bishop and delegates.

Ah yes, the delegates. Please continue to be in prayer for them as they discern how to vote on this subject. You can send your thoughts to them at gcdelegates@greatplainsumc.org. An email to that address forwards to all 26 delegates and alternates.

I don’t know what will happen Feb. 23-26 during the special session of General Conference in St. Louis. What I hope happens is we’ll recognize that while we might not be of one mind on the subject of human sexuality, we are of one mind in recognizing that Jesus is the Lord of all. I hope we’ll understand that we have a world full of broken people who desperately need to hear and learn about the soul-saving price Christ paid for us all – no matter where we stand on human sexuality or any other topic.

Thanks for the opportunity to serve in the Great Plains Conference.