In Layman's Terms: "Star Trek" offers this nerd a glimpse of a Christ-like future 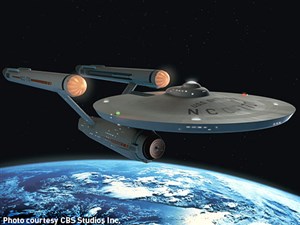 The folks out there in Kansas and Nebraska who have met me already know that I’m pretty much a big nerd. I came to terms with that fact a long time ago.

One piece of evidence is that I’m totally unashamed to say that I’m a huge “Star Trek” fan. I love almost all things science fiction, but there’s something about the “Star Trek” universe that has kept my attention since I was a very young boy.

The original television show, which celebrated its 50th anniversary Sept. 8, was off the air by the time I was old enough to appreciate it. But an independent station in the Kansas City area showed it every afternoon after school. My grandmother would bribe me. If I completed my homework in time, I could watch “Star Trek.” Of course, the work had to be done correctly, or I didn’t get to watch. But it seemed like a fair deal to me at the time.

I was captivated by the adventures of the starship Enterprise and its crew, under the leadership of Capt. James T. Kirk.

The aliens. The villains. The transporter. Phasers. Warp speed. I loved all of it.

But as a young boy, nothing was better than the battles. The original series didn’t have nearly as many conflicts as the later series and movies would display. But probably my favorite episode was one called “The Doomsday Machine.” At the time, I liked it because it involved the Enterprise battling a huge, planet-killing device wandering the universe. It was a dreadful weapon from generations ago but aimlessly wandering the galaxy.

The “shoot-’em-up” aspect of that episode excited me.

I didn’t watch the original series for many years, mostly because it disappeared from daily airings as a syndicated show when “The Next Generation” series started. In college, I had a roommate who enjoyed “TNG,” as Trekkies call it, so I learned to enjoy a whole new cast of characters – Capt. Pickard, Cmdr. Riker, Lt. Cmdr. Data, Dr. Crusher and others.

Many years later, just after “TNG” went off the air and the original cast was done making movies, I received a gift of the original series on three DVD sets. I watched the entire series. And this time, I gained an even better appreciation of why “Star Trek” remained one of my guilty pleasures.

No longer was it because of the battle scenes – though I still think phasers and photon torpedoes are cool. Instead, now what kept my attention were the subtle commentaries on the human condition. The original series took on social issues such as prejudice, racism and truly living in peace.

And that “Doomsday Machine” episode turned out to be a pretty provocative statement about consequences of designing, manufacturing and then using weapons of mass destruction.

“TNG” and other series that followed – “Deep Space Nine,” “Voyager” and “Enterprise” – all made social commentaries based on the times in which they were filmed. The politics of the 1980s, 1990s and early 2000s provided for more direct talk about important subjects such as race relations, equality, greed, language barriers, hatred,  environmental issues and sacrifice.

I guess I embraced “Star Trek” as a boy for the action but then stayed as an adult because of the lessons learned through the actions of flawed people trying to live up to the ideal of the Federation of Planets and Starfleet. Capt. Picard was cerebral and fair, but he had an ego from time to time. Capt. Kirk was no angel, but even he grasped the need to lift up others when they struggle. And he understood the power of God.

You’re thinking, “Really?” Let me direct you to what is widely considered the worst of the movies featuring the original cast, “Star Trek V: The Final Frontier.” The plot features a being claiming to be God calling a band of people who hijack the Enterprise to come help him move among the stars and planets. While this movie (in some ways deservedly) has been lampooned and criticized for such a plot, I actually like to focus on two lines stated by William Shatner, who played Kirk. At the end of the movie, someone asks, in effect, where is God? Kirk says He is in the human heart. A bit earlier, when Kirk, Mr. Spock and Dr. McCoy realize everyone has been duped by this being, it is Kirk who openly asks “What does God need with a starship?”

From a very young age, we talk about being a Christian starts with asking Jesus into our hearts. I don’t know whether the writers meant for Kirk to make such a statement, but that’s how I choose to look at it.

And Kirk is the one who finally acknowledges that God is all-powerful. I think about Job 38:4-11, when the Creator is putting Job in his place. It says: “Where were you when I laid the earth’s foundations? Tell me if you know. Who set its measurements? Surely you know. Who stretched a measuring tape on it. On what were its footings sunk; who laid its cornerstone, while the morning stars sang in unison and all the divine beings shouted?  Who enclosed the sea behind doors when it burst forth from the womb, when I made the clouds its garment, the dense clouds its wrap, when I imposed my limit for it, put on a bar and doors and said, ‘You may come this far, no farther; here your proud waves stop’?”

Ultimately, I think “Star Trek” has endured because it puts on display the kind of society we want – both here on Earth and beyond our solar system. It’s a place where women are equal to men. A person’s race doesn’t matter. Ethnicity is not an issue. Every effort is made to preserve peace where it exists or to restore peace where it has been lost. People help each other. There is harmony, sacrifice and genuine care for fellow beings.

Those all sound like Christ-like qualities to me. I think Mr. Spock would consider the parallel to be “logical,” or at the very least “fascinating.”
Live long and prosper, Great Plains!