In Layman's Terms: Unlike a nutcracker, Jesus as a gift won't disappoint 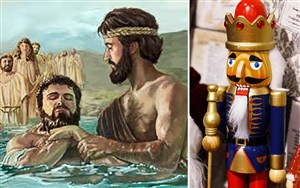 I was either 10 or 11 years old when we received a rather large box, wrapped up as a Christmas gift, in the mail. And it had my name on the “To” line. When I returned home from school and saw it under the tree, I could barely hold back my excitement.

I think it was my grandparents, but I don’t truly recall for certain which relative had sent it. I do clearly still remember the anticipation I had with each passing day as this present sat under the tree.

Of course, as a boy, you have those chilling thoughts that it could be something practical, such as a new coat or a big collection of socks or underwear. Those aren’t fun Christmas presents!

Finally, Christmas Eve arrived, and in our family’s tradition at the time, we opened presents. There was no doubt which one I was going to open first. I tore off the wrapping paper, flipped over the box and came face to face with the present I had waited weeks to open.

It was a nutcracker – a 2-feet-tall toy soldier nutcracker, to be exact.

I didn’t want to seem ungrateful, but I must have looked disappointed. My mom broke the stunned silence in the room by asking “Who would think a boy would want a nutcracker?” My dad made some kind of joke using, shall we say, “colorful” language.

No “Star Wars” ship. No new blocks or cars with which to play. Not even a coat or socks. I was the not-so-proud owner of a nutcracker.

It took me years to realize why I was so disappointed. Like many children, I had been totally consumed with the concept of presents for me. I wanted lavish gifts, so when I received a nutcracker – even a big one – I didn’t appreciate it.

Don’t get me wrong: A nutcracker is a totally lousy gift for a 10- or 11-year-old. But as a 44-year-old guy, I now appreciate that Christmas isn’t about me receiving cool gifts. It’s not about me getting what I want. The anticipation for me now during Christmastime is for time to relax, spend time with family and celebrate – truly celebrate – the birth of our Savior on Earth.

And I realize it’s up to me to help share the holiday cheer.

The lectionary reading for this week includes Matthew 3:1-12. In this passage, we read about John the Baptist and how he urged people to “Change your hearts and lives! Here comes the kingdom of heaven!” He goes on to chide the Pharisees and Sadducees for not living out their faith and for considering themselves better than others because of their lineage back to Abraham.

John concludes his monologue in verses 11 and 12 with a promise that someone stronger – Jesus – is coming soon: “I baptize with water those of you who have changed your hearts and lives. The one who is coming after me is stronger than I am. I’m not worthy to carry his sandals. He will baptize you with the Holy Spirit and with fire. The shovel he uses to sift the wheat from the husks is in his hands. He will clean out his threshing area and bring the wheat into his barn. But he will burn the husks with a fire that can’t be put out.”

Why talk about John the Baptist during the Advent season? Because he teaches us about anticipation. He’s confident that he knows a much more powerful witness for God is on the way. He is excited about the change that is coming. And he holds others accountable to changing their lives so their actions match up to their words.

John isn’t providing a buildup that is going to result in a nutcracker-like present. Instead, he’s preparing us so we’ll be ready when the greatest gift of all time arrives. But there’s a twist on this story that I’d urge you to ponder.

When I unwrapped that nutcracker present, I was thinking all about me as the receiver of a gift that happened to be wrapped in a large box. It’s OK to think about ourselves a bit when we think about the gift that God gave us by providing a part of Himself for us, Jesus the Christ. But then we must move past being the receiver to taking part in sharing this tremendous gift with others.

No doubt other people would have been happy to have a nutcracker, especially one that large and strong. But I never shared it. I never spread the word that I had something from which others may benefit. It simply went in the trash.

Now, I’m not comparing the gift of grace through Christ with a nutcracker. But I think it serves as a decent analogy for how we are called to spread the word about God’s love for all humankind.

In the Matthew text, John the Baptist urges the Pharisees and Sadducees to “Produce fruit that shows you have changed your hearts and lives.” In other words, walk the talk.

We get that opportunity every day. We can invite people we know and meet to attend worship services or take part in our small groups with us. We can stand up for the marginalized in society and not be willing to accept the status quo because that takes little to no effort. We can show love to all and encourage others to show kindness by doing it ourselves in any number of circumstances.

And, of course, we can share with others the anticipation we have during the Advent season. Just as John the Baptist paved the way for Jesus to start His ministry among the curious, repentant people who sought out a solution for their wounded souls in the wilderness, so also can we pave the way for Jesus in the lives of our friends and family members who are lost spiritually in the wilderness of a world that says bigger is better, that equality isn’t necessary and, yes, that it’s OK to be a snob about getting a nutcracker for a present.

The people in our world need to meet our Savior. They need the joy and peace that comes with a relationship with Him. But if we don’t change our lives to show that we produce fruit for God, we are no better than the Pharisees and Sadducees whom John confronted.

If we fail to share the good news with others, then we aren’t sharing the greatest present ever given to humankind.

It’s a tremendous present for us all, so it needs to be shared by all.

Unlike the younger me with that nutcracker, the folks who receive this gift won’t be disappointed.