In Layman's Terms: Use political slip-up to help us shine light on women's issues 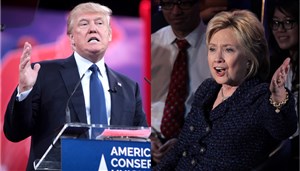 I don’t know about you, but I spent the 90 minutes of Sunday night’s second presidential debate feeling more and more weighted down by the enormity off the task we all have ahead of us.

Whoever wins Nov. 8, we will have a president that a large part of the population simply doesn’t trust. Uniting the country seems like a highly unlikely prospect at this time. I believe that much like the church will rely on laity to build unity, the people of the country will need to be the ones to unite our nation, not politicians.

Hillary Clinton, a United Methodist, has been chased for months by an email scandal that has a considerable part of the population convinced that she failed to protect sensitive national security information – and then lied about doing so. Arguments against the Democratic candidate tend to hit their zenith with an argument that she did things that would land an average American like you and me in jail.

Donald Trump, the wealthy businessman of “The Apprentice” television fame, has faced all kinds of scrutiny for bombastic remarks and the recent revelation that he used laws to legally avoid paying personal income taxes. But it was a recent revelation about a 2005 audio recording that seems to be costing him the most support. In that recording, which Trump associated with “locker room talk,” he makes statements that brag about conquests of women and groping women in ways that the Republican’s critics say are assault.

As is the case with us all, the candidates from our two major political parties have serious flaws. Theirs just get played out on a national stage by virtue of seeking the highest office in the land. And whom you vote for is none of my business. Decide which candidate you can support most or, on the flip side, which one you fear the least, and cast your ballot.

But I do think the recent scandal involving the recording gives us an opportunity to turn a disturbing political issue into a very real discussion on how our society portrays and treats women.

It’s a particularly interesting topic to me as the husband of a United Methodist pastor and father of a daughter working toward her college degree. While women have made great strides in our country and beyond since the 1950s, the harsh reality is that women still face challenges that men do not.

The three biggest that come to mind for me are sexual harassment, wage disparities and maternal health.

Regrettably, sexual harassment happens all the time in our society. As shocking as the words we heard on the Trump recording were to us, if we are honest with ourselves, we’ve heard those words before. I can honestly say I’ve never heard such words in any locker room I’ve been in, but in my former job as a newspaper editor, I interacted with people from all walks of life and heard similar banter. It made me uncomfortable then. Hearing those kinds of things makes me uncomfortable now.

Just because we hear these kinds of things often doesn’t make it right. Frankly, it’s been shocking to see posts on Facebook and other social mediums from people I’ve known over the years making excuses for such behavior. Some of these people have daughters. Many of them have wives. And some of them are women. I can’t imagine they would think it’s OK for someone to treat their child in such a way or wife in such a way. The women I know wouldn’t allow a man to talk to her in such a way. Yet, they make excuses and condone this behavior, in some cases just because of party affiliation. It’s sad.

Sadly, the church has its share of harassment going on as well. I’ve heard stories from women pastors about inappropriate statements made to them, comments made behind their backs about them, people making an issue about a tattoo or the way a female member of the clergy dresses. In most cases, none of those kinds of statements or behaviors would be aimed at a man.

As much of a psychological toll harassment takes, discrepancies between genders is more easily seen by the outside world in the issue of wage disparity. Depending on your source, women in the United States make, on average, between 79 cents to 82 cents for every dollar a man makes in the same professions within the same industries.

I’ve never understood why people ignore this problem. Is not the goal of companies and organizations to hire and retain the best people? Is not the quality of the work supposed to be the most important factor in determining who is on your staff? Apparently there are still far too many people in decision-making positions out there who think a talented woman is worth less than a talented man. Promotions are yet another issue, with women all-too-often being passed over for promotions, especially if they are still in child-bearing years. Companies use that as a lame excuse for not giving women a chance to further their careers and benefit the company or organization at the same time.

I’ve been lucky to work with organizations that, at least in most cases, didn’t make an issue of gender. In my 20-year newspaper career, the first publisher I worked for in Minnesota was a woman whose strong views made her a target for some people. I greatly respected her because she was smart, could relate to everyone in the building and wasn’t afraid to speak up for things that she deemed to be important.

Two of the top three supervisors I worked for in Missouri were women. Both were talented, smart and easily earned respect. It wasn’t until I got to Utah that I didn’t have a female boss. But even then, our regional president was a woman. She stood only a little above 5 feet tall, but she was easily respected because of her intelligence and the way she respected employees. I’ll always remember her as being tough but fair in her expectations.
Even now, I work in an office of mostly women. I work for some. Some work for me. We all work together.

I recognize I’ve been lucky in this regard. But all too often, my experience has been the exception rather than the rule. We can and should do better.
One final point is in regard to maternal health. Women need access to quality health care, and they shouldn’t be penalized because God gave them the tremendous honor and responsibility of bearing children. Yet, in the 21st century we still find maternity leave as a workplace issue. We still have women who don’t have access to doctors to help ensure they remain healthy.

How significant is this problem? Each year, about 300,000 women die during pregnancy or childbirth, with as many as 90 percent of those deaths being preventable if only the woman had access to quality health care. And don’t think the United States is immune to the problem. Even here, three women die every day during childbirth. According to the United Methodist Women’s website, the problem is even greater for African-American women. In New York alone, black women have higher mortality rates – almost 80 deaths per 100,000 live births – than women face in Syria or Iraq. Learn more about maternal health issues.

My verse for reflection this week comes from Genesis 1:27-28:

“God created humanity in God’s own image, in the divine image God created them, male and female God created them. God blessed them and said to them, ‘Be fertile and multiply; fill the earth and master it. Take charge of the fish of the sea, the birds in the sky, and everything crawling on the ground.’”

What I like about this verse is that it doesn’t single out men or women. While society in biblical times placed women in subservient roles to men, this verse from the very beginning of our scriptures makes a statement that God created men and women in His image. That sounds like an intention of equality to me. God created both. He blessed both. He commanded both to fill the earth and to be stewards of all creation.

Some of you may not know that The United Methodist Church takes this topic so seriously that it has among its 13 general agencies the General Commission on the Status and Role of Women (GCSRW). The agency works to address discrimination issues and sexism within the church, nurtures clergy and lay leaders, raises awareness of women’s issues, supports victims of sexual harassment or abuse, sponsors the push for inclusive language, trains Central Conference women as they push for reforms within their own cultures, and monitors annual conferences and the General Conference for inclusiveness.

If you have questions or concerns related to GCOSROW, I recommend you contact these two women. Or send an email to the agency’s board at info@gcsrw.org.

These problems can be rectified, but it will take all of us – you and me included – to educate our children and create a culture of equality among genders.
We shouldn’t have to endure such “locker room” talk or such juvenile behavior. And we certainly shouldn’t condone such behavior. It demeans the women in our lives and harms our society overall.

As for those political candidates? We may not be able to do anything about them at this point. But you can let your voice be heard for whichever candidate you support by going to the polls Nov. 8.