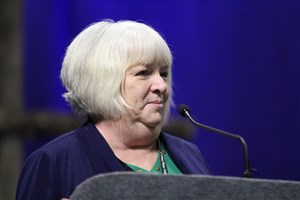 I’ve often been accused (sometimes even to my face) of caring too much about words. No doubt I should plead guilty. I’ve learned through experience that words have incredible power to shape our perception of reality in the same way that they have power to affect emotions. So it was, a few mornings ago, that a pre-coffee social media rant of mine set off a spirited discussion. The rant read: “UMC friends, you are only a ‘delegate’ if you are attending Jurisdictional or General Conference. Whether lay or clergy, you are a ‘member’ of Annual Conference. Common but crucial mistake. Annual conference is your home base.”

The notion that lay persons elected by local charge conferences are “members” of the annual conference, rather than “delegates,” is almost as old as Methodism itself. Indeed, in the early days, only clergy were members of the annual conferences, and laity had neither voice nor vote. Only in 1830 did the Methodist Protestant Church become the first Methodist branch to admit lay members – a radical move at the time. It was not until 1932 that the last of our predecessor denominations ended the long-running controversy and approve the election of lay members.

The constitution of the United Methodist Church describes the annual conferences as “fundamental bodies of the Church” (Article I, Sect. IV) and the “basic body of the church” (Sect. VI, Article II, Para. 33). The local church, on the other hand, is “the most significant arena through which disciple-making occurs” (Para. 201) and the “strategic base” where “the church encounters the world” (Para. 201). Lay membership in the annual conference is described first in Article I, Para. 32 and Para. 602.4. [It should be noted that there are many others, in addition to those elected from local churches, who serve as lay members of the annual conference. They are also detailed in Para. 602.4]

But enough of the history and discipline. Why does it matter what they are called? It matters because the lay members play a far more active role than that of “delegates” who are sent to a legislative body to vote the will of their constituents. If those elected from local churches were mere delegates, there would be no reason why the business of the Annual Conference could not be conducted by email. (This might sound attractive to those who are weary from last week’s conference session!)

“Lay members” have these important functions:

“But doesn’t the local church have a vote?” is a typical question in response. The answer is “yes.” The local church has a vote when electing its lay member or members to the annual conference, when giving candidates for ministry permission to enter the ordination or licensing process, when setting the pastor’s salary, when deciding matters of local church property, and when guiding the ministry of the local church. The connection is a partnership, and vital engaged leadership is necessary in every role for the church to fulfill its mission. Electing enthusiastic, qualified lay members helps maintain a healthy partnership. And now, for some coffee.

The Rev. Evelyn Fisher retired last year as director of congregational excellence for the Great Plains Conference.
Subscribe to GPconnect