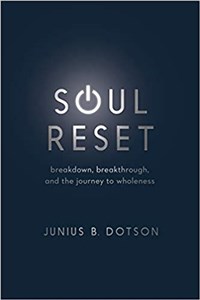 I sat down to read the new book “Soul Reset” by the Rev. Junius Dotson over the Labor Day weekend. I quickly found myself wishing he had written it about six years ago.

I say six years ago because I was the guy that Dotson’s six-session Bible study and discussion guide is written to help. In 2013, I was a newspaper editor working incredibly long hours, taking barely a day off, and not taking good care of myself at all.

My time with God was the minimal amount of time needed to prepare my Sunday school lesson for the week.

“I was thinking, ‘Wow, really, God? Now? In the middle of an important season at church, you’ve got me laid out in an emergency room?’” Dotson writes in his book. “But now I look back and see that God was saying to me during this time, ‘Junius, you are so hardheaded. The capital campaign is not the most important thing in your life. Your walk with me is the most important, and you need time to grieve. You need to take care of yourself. You’re going to stop everything and reset.’”

Out of that difficult time in life, Dotson, now the general secretary and CEO of Discipleship Ministries for The United Methodist Church, started putting together this study meant to help a person see that they are experiencing a crisis of faith practice and take practical steps to re-center their lives with Christ at the focal point. Watch this short video from The Upper Room featuring Dotson talking about his study.

I didn’t have near the tragedies in my life that Dotson points out in this study. But I definitely didn’t take care of myself. I am a Type 2 diabetic, and I had trimmed my weight down nearly 70 pounds from my heaviest point. But starting in 2013 and continuing for nearly two years, I ballooned by 45 pounds and didn’t pay attention nearly as much as I should have to my blood sugar levels.

Like Dotson, I did my best to mask things, but inside, I was not feeling joy. I don’t know that I could be considered clinically depressed, but I was not happy. Every day was a struggle.

Dotson and I share an affinity for the Dallas Cowboys (I know; it’s an illness). But what got my attention in his book is a baseball analogy. He points out that any journey in your faith has to start just as any scoring play in baseball starts: You have to touch first base. And that first base for us is moving closer to God.

“This is what I believe Jesus was talking about when he described living in abundance,” Dotson writes. “When he said, ‘Seek ye first the kingdom of God,’ he was telling us to touch first base! Seek God first, he said, and all the other things will be added. We want to jump to home base without seeking first, don’t we? We want influence and popularity, persuasion, positioning, wealth, and so on. But we’ve got to seek God first in order to really live the unforced rhythms of the spiritual life.”

This six-session study traces Dotson’s life experiences to share how he ignored warning signs so the reader won’t make the same mistake.
Along the way, Dotson provides six spiritual practices — one that ties in with Dotson’s theme for that session:

Each session draws on biblical examples of the concepts Dotson wants to share. And questions after each chapter will foster deep discussion and internal reflection. In an appendix in the back of the book, the six practices mentioned earlier come with a daily challenge or activity that emphasizes that point.

As I write this, I’m on day 2 of the Prayer of Examen practice. While I’m not as stressed as I was in those newspaper days, life in The United Methodist Church has been a challenge for more than a year. For me, the stress started about this time last year with town hall meetings in all 17 of our districts. While it was great to be on the road and either meet or get reacquainted with people throughout Kansas and Nebraska, that time commitment a lot of nights in hotels away from family, days at a time away from other projects in our office, and a whole lot of eating fast food.

I didn’t realize how drained I had become until I started reading the synopsis of Dotson’s book a couple of months ago. Now that I’ve read it and am starting to go through the practices, I’m convinced I’m ready for my own “Soul Reset.”

I can in good conscience recommend this book as a small-group study or even a sermon series. I think it will speak to many pastors in the Great Plains Conference and to even more of the laity in our churches.

Learn more about and order the study.

Read a story by David Burke about Dotson's book.

Todd Seifert is communications director for the Great Plains Conference of the United Methodist Church. He can be reached via phone at 785-414-4224, or via email at tseifert@greatplainsumc.org. Opinions expressed are the author's alone and do not necessarily reflect the views of the Great Plains Annual Conference or The United Methodist Church. Follow him on Twitter, @ToddSeifert.
Subscribe to GPconnect