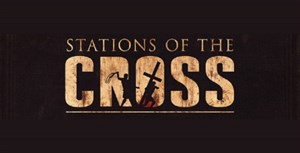 The Seventh Station: Jesus Takes Up the Cross

After mocking him, they stripped him of the purple cloak and put his clothes on him. Then they led him out to crucify him.

The Eighth Station: Simon of Cyrene Helps Jesus to Carry His Cross

As they led him away, they seized a man, Simon of Cyrene, who was coming from the country, and they laid the cross on him and made him carry it behind Jesus.

The Ninth Station: Jesus Meets the Women of Jerusalem

A great number of the people followed him, and among them were women who were beating their breasts and wailing for him. But Jesus turned to them and said, “Daughters of Jerusalem, do not weep for me, but weep for yourselves and your children. For the days are surely coming when they will say, ‘Blessed are the barren, and the wombs that never bore, and the breasts that never nursed.’ Then they will begin to say to the mountains, ‘Fall on us’; and to the hills, ‘Cover us.’ For if they do this when the wood is green, what will happen when it is dry?”

Reflection:
Our Christian faith makes it clear that Jesus was not a passive victim of an unjust crucifixion. Christ chose to suffer, and he embraced the cross so that the nations and all peoples could be healed and made whole in every spiritual and relational sense, temporal and eternal. 1 Peter 2:24 reads, “He himself bore our sins in his body on the tree so that we might die to sins and live for righteousness; by his wounds, you have been healed.” As we live our lives of faith, we do so “looking to Jesus the pioneer and perfecter of our faith, who for the sake of the joy that was set before him endured the cross, disregarding its shame (Hebrews 12:2).

And while Jesus had a clear understanding of his mission to carry out God’s saving and healing will for the world through the cross, the people around him on that Good Friday did not understand the fullness of what was happening before them.

Some people thought they were controlling the outcomes. Other people were naïve to the plotting and scheming taking place behind closed doors. Others knew what was happening but could not control the outcome.

Some people participated in dutifully executing the verdict and sentencing of the crucifixion of Jesus on Good Friday. Others, pilgrims from afar to the Passover like Simon of Cyrene*, happened to be bystanders along the Via Crucis (The Way to the Cross) as Jesus passed by carrying his cross on that Good Friday afternoon.  Still others – “a great number of people” (Lk. 23:27) – followed Jesus along the Via Crucis, strongly opposed to and horrified with what was happening, like the women who accompanied him, wailing with cries of pain, grief, and anger.

The Grace We Need – The grace to be ambassadors of Christ’s healing and saving grace in the world, even if it leads us down paths of righteousness fraught with shadows of hardship (Psalm 23).

Let nothing disturb you; nothing frighten you; All things are passing; God never changes; Patient endurance attains all things; Whoever possesses God is wanting in nothing; God alone suffices. Teresa of Avila