In Layman's Terms: Passion Week has some baseball season parallels 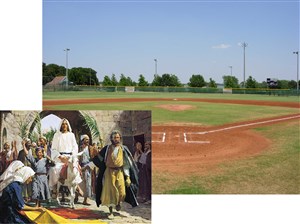 Perhaps no time of year provides more of a sense of hope than the time around Easter. For starters, we as Christians are reminded of the importance of sharing with others the hope for eternity through the death and resurrection of Jesus the Christ.

And then, there’s the hope that starts with the opening of the baseball season.

What does baseball have to do with Jesus? Probably not all that much, to be honest. But I challenge you to find two things that provide more hope than opening day in baseball and Easter Sunday in the church year.

Earlier this week, 30 major league teams started their 2017 seasons. All of them started 0-0. All of them played in front of large, excited crowds. And while some teams will tumble from the euphoria of opening day to the depths of the division standings, others will compete to reach the promised land of the World Series, pun intended.

On opening day, every team has a chance to experience the love of the fans – people excited for the possibilities of a World Series crown. Some fans will experience what we Kansas City Royals fans did in 2015, when our team defeated the New York Mets in the World Series. Last season, Chicago Cubs fans finally experienced what it’s like to win the championship after 108 years of having to “wait ’til next year.”

I think there is a parallel between the hope of opening day, followed by intense joy or disappointment, and Easter story. Please allow me to explain.
Matthew 21:1-11 recounts the story of Jesus entering Jerusalem on what we now commemorate as Palm Sunday. The crowd was euphoric, spreading their clothes on the road in front of him or cutting down palm branches to create for Jesus a covered path into the city. It truly was a triumphal entry, with people cheering loudly and proudly.

In a way, this was Jesus’ opening day for His “season.” As much as I love baseball, I recognize Jesus’ one-week season for His final teachings and, of course, His tremendous sacrifice for us was far shorter than the six months it takes to play a 162-game baseball season. But the biggest difference is His season provides an opportunity for an eternity of victory – in this case over sin and death!

Later in the story of what some call the “Passion Week,” Jesus is betrayed. In baseball, fans feel the sting of betrayal when a beloved player is traded late in the season. For Jesus, the time came during His time sharing what many think was the Passover meal with the disciples and His arrest in the Garden of Gethsemane. All four gospels record the story – Matthew 26:47-56, Mark 14:43-52, Luke 22:47-53 and John 18:2-12 – with a few details appearing in some and not in others. But the common theme is that Jesus was betrayed by one of His followers, and it was clear from that moment forward that things would never be the same.

From there, we plunge into the despair of the death of Jesus, with all of us guilty of having a sinful nature that required such a big, loving sacrifice by our Savior. Our season, as we move through the week, spirals downward, with us hitting the bottom – our last place of faith, if you will – on Friday, with the crucifixion and death of Jesus on the cross.

Much like a team 20 games out of first place on Sept. 1, we have no hope when the reality of what happened on that Friday so long ago sinks in. Without divine intervention, we are simply playing out the season. But our Savior has a something that no team in baseball has: the love and power of our Creator at His disposal.

As a result, we aren’t forced to live as “cellar dwellers” in the standings, with nothing for which to be happy. Instead, the stone of our human limitations is rolled away, just like the stone of Jesus’ tomb. Hope is not only restored for a few – much like the recipient of a late-season blockbuster trade – but made available to all humankind because, as the angel said that day, “He is risen!”

What we are about to embark upon is a roller coaster of a week. We start with a time of hope and celebration of coming glory, just as we read about in the account of Palm Sunday and as all fans experience on the opening day of the baseball season. We then, like all but a few baseball fans, will experience despair as the season of hope unravels.

Unlike the baseball season, though, this season in the life of the church is guaranteed to culminate in victory. It’s a win Jesus already recorded over sin and death.

And we all get to hoist the trophy carved by God, thanks to the hope-restoring gift of grace.