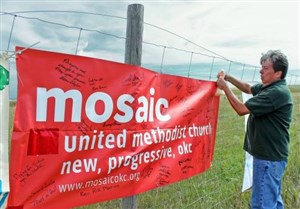 In early November, I responded to an invitation by Episcopalian Priest John Floberg to join other clergy at Standing Rock in North Dakota. The purpose was to be a witness to the nonviolent, prayerful presence of the native people to protect water and land from the Dakota Access Pipeline and to stand with them. Father Floberg thought 100 clergy would respond to his call to come, and more than 500 showed up. Approximately 30 were United Methodists.


After sleeping on the floor of Father Floberg's church in Cannon Ball, the “sleeping room” was transformed back into the sanctuary for an early morning Communion service. The blended voices of people of faith who had come from all across the nation lifted spirits as we sang Dona Nobis Pacem together before receiving the elements.

Then we drove to Standing Rock camp, just a few miles north, where hundreds gathered around the sacred fire as representatives from many denominations read their church's documents repudiating the Doctrine of Discovery. Now, I have to admit, before the witness at Standing Rock, I did not know about this doctrine that was put in place by papal decree in 1492 and adopted into U.S. law in 1823. The doctrine sanctioned the seizing of indigenous lands worldwide. Legally, it gave white Christians the authority to subjugate indigenous peoples of property and land.

And so, around the sacred fire at the Standing Rock camp, the Doctrine of Discovery was repudiated. This link is a clip of the reading from the United Methodist Church: On behalf of the United Methodist Church, we denounce the doctrine of discovery as fundamentally opposed to the gospel of Jesus Christ and of our various religious traditions as a violation of inherent human rights that all individuals and peoples have received from God.

At General Conference 2012, the Doctrine of Discovery was repudiated

The printed statements of repudiation were then presented to the elders, and they made the decision to burn the statements in the sacred fire. After each of us experienced smudging, an act of purification, we then walked peacefully to the Backwater Bridge, where the road was barricaded to keep water protectors from accessing the land where the pipeline was to be installed.

A Niobara Circle of Life of hundreds then took place with invitations for anyone to share who wished.
Over and over, native people offered their thanks to us Caucasians who came to stand with them. It was a very humbling experience. Their grace, forgiveness and commitment to nonviolence were powerful!

Those of us with white privilege have much to learn from our indigenous sisters and brothers. Let us hear with new ears how God is speaking through these people who are standing bravely on behalf of the land, water and future generations.

As of the writing of this article, Dec. 4, the Army Corps denied easement for Dakota Access Pipeline.

Read more about the background of the Doctrine of Discovery.


The Rev. Carol Windrum is retired and formerly served as director of Micah Corp, a summer internship program that promotes mercy and justice ministries. She resides in Omaha.
Subscribe to GPconnect