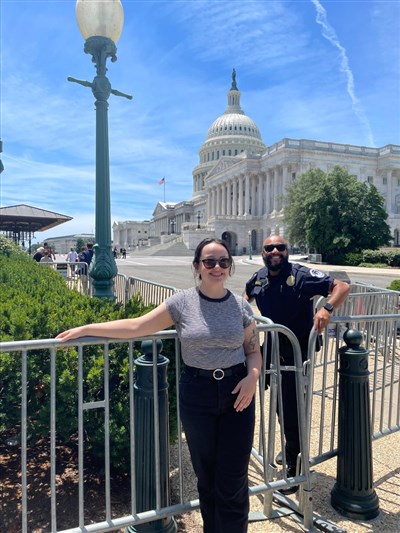 Emily Smith is one of our Micah Corps interns this summer. She is a student at Wichita State University studying social work. She is passionate about helping people through creating relationships with the community which is a major focus of the internship this summer. “I am super excited to be part of the Micah Corps while serving with those in need.”

On one of the last days in Washington D.C., a few of us walked by the Supreme Court to get a picture in front of the building. Since we arrived, police barriers have blocked off the entire property. Only employees and those with reservations for the visitor center were able to enter the premises.

At the entrance to the barrier, an officer regulated who came through the barriers. We spoke with him for a little while. He explained that all of the Capitol buildings were shuttered off to prevent protesters from gathering on the steps and blocking police resources from being able to enter the building. These precautions, he elaborated, were put in place after the January 6th insurrection. He told me about his experience on that day. He was sprayed with pepper spray, bear spray, and other substances. When he went home, he had to strip himself in his driveway to avoid bringing the substances into his home. He spoke about his fellow officers testifying in the hearings about the insurrection and both the physical and emotional trauma they experienced.

I asked him what changes he would like to see in policing. He told me about his experience growing up as a person of color in New York and being racially profiled by police officers. He wants all civilians to be aware of their rights and tries to hold other officers accountable for their biases against people of color. It was incredibly interesting to speak to an individual officer, rather than hearing from a representative from an entire force. His personal experiences were intriguing to hear about and clearly impacted his work. Earlier in the week, we had an interaction with a white officer who yelled at us for walking behind police lines - which was an accident because a barrier had been left open.

It was interesting to see the difference in how we were treated by a white officer and an officer of color. It truly illustrated the power imbalances in policing.