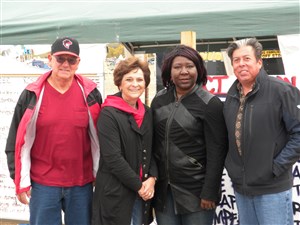 I am standing with Standing Rock. I traveled to the encampment in North Dakota and met the native peoples demanding the Dakota Access Pipeline be stopped. My friends at the camp asked me to use my voice to protect “Mother Earth” and speak for water justice.

While it appears the task is too large to accomplish and going up against big oil seems incomprehensible, the requests at Standing Rock were simple. They requested blueberries, fresh, healthy blueberries to add to their diet; a young Lakota man from South Dakota asked me to hug him; and the local Sioux native wanted me to tell the story of Standing Rock and spread the message that "they are “not protesters” but “protectors, defending the water, because water is life.”

The original route of the oil pipeline was to cross close to the city of Bismarck. The path was changed when it was concluded this could potentially pose a water safety issue for residents of Bismarck. The oil pipeline was redirected to the south, directly under the water supply of the Cannonball reservation. The thousands of supporters coming to Standing Rock are united in solidarity with the Cannonball tribes who are peacefully and prayerfully taking action for climate justice, protecting their sacred tribal lands and addressing water quality. No water should be in danger of contamination.

You can lend your voice and act to support Standing Rock.

3. Fight for Water and Social Justice using the 13 Steps to Sustainability: http://www.unitedmethodistwomen.org/sustainability