In Layman's Terms: Vin Scully was the prophet of baseball; can we be today's prophets for Christ? 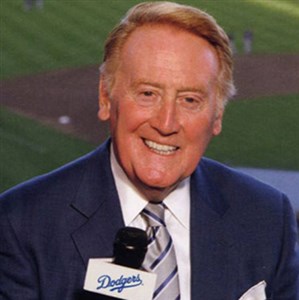 One of the final connections to my childhood signed off the air Sunday when the San Francisco Giants finished a 7-1 defeat of the Los Angeles Dodgers. Vin Scully, the voice of the Dodgers since the team played in Brooklyn way back in 1950, called his final game.

At the age of 88, Scully decided it was time to call it a career after 67 seasons. In his final game, he called the broadcast for the Dodgers solo – just a nine-inning chat with fans one last time.

I grew up adoring the Kansas City Royals, so I didn’t root for the Dodgers. But I did love to listen to Vin Scully.

When I was a kid, we didn’t have baseball on television every day. Unlike current days, when you can watch all 162 games played by your favorite team, during my childhood of the late 1970s and 1980s, baseball was mostly on just two days a week.

“Monday Night Baseball” was a big deal, though it seemed like that game always involved either the New York Yankees or the Philadelphia Phillies. And because the games usually got over late, I only was allowed to stay up if the Royals were playing in that game, which was rare.

But Saturday afternoons provided an opportunity to see the players that I couldn’t see on a regular basis. The NBC affiliate in Kansas City broadcasted my favorite shows: “This Week in Baseball” and “The Baseball Bunch.” Then, it was time for the Saturday afternoon game.

One broadcast team involved the ageless Bob Costas and Tony Kubek. The other paired color commentator Joe Garagiola with Vin Scully. As much as I loved the Costas-Kubek team because they called the American League game and, therefore, I had a chance to see my Royals from time to time, I probably watched more complete National League games because of Scully.

As I got older, I found him on radio broadcasts from time to time. I’m not sure if they were simulcasts of televised games or if he was on the radio, but on some clear summer nights, I could lie in bed and find an AM station carrying a Dodgers game. The signal was full of static and barely audible at times, but I would lie there and listen. Unlike other announcers I listened to at that point in my life, Scully could make you feel like you were there. He would stop talking and let you hear the crowd after a monumental play. And he told stories – about the players, about the managers, about his times back in Brooklyn. He knew when to talk and when to listen to the crowd so you, too, could hear the many voices.

And it was always a treat when Scully and the NBC crew broadcasted the World Series. Remember, it was Scully with the now famous call from 1986, “It gets through Buckner! Here comes Knight, and the Mets win it!” It was a moment of elation for the New York Mets at a gift to win game 6, and it was a continuation of a “curse” for Boston Red Sox fans as an error cost them a chance to win what at the time would have been their first championship since 1918. The Red Sox eventually won the title in 2004 and followed that up with championships in 2007 and 2013. You can watch the events that led to that game 6 win.

Another iconic Scully moment came in 1988, when his beloved Dodgers – heavy underdogs to the dominant Oakland A’s – defeated the favorites with the help of a game 1 “miracle.” Kirk Gibson, playing on two legs injured so badly that he could barely walk, let alone run, hit a pinch-hit, two-run home run with two outs in the bottom of the ninth inning off A’s pitcher Dennis Eckersley.

Scully called the home run, let the audience hear the sustained roar of the crowd and then chimed in: “In a year that has been so improbable, the impossible has happened!” You can watch the recording of that moment.

It’s kind of sad that Scully didn’t get to call more Dodgers games in the World Series in his later years. Los Angeles have advanced to the National League Championship Series three times since 1988 but never have defeated their opponents. I think another generation of baseball fans would have been blessed if they could have heard one of the best voices in baseball history calling the games.

Of course, the Dodgers could make it this year. The Dodgers won their division, but Scully decided long ago that his career would end with the regular season. In yet another classy act, Scully didn’t want to overshadow the accomplishments of the team he covered.

For my entire life up to this point, Vin Scully has been the voice of baseball. Sure, there have been other people calling games, but none could make you appreciate the game like Scully. If he said something you didn’t agree with, you didn’t immediately fly off the handle like people do these days at Costas, Joe Buck or other announcers. With Scully, you considered what he had to say and, in many cases, he won you over.

I guess I looked at Scully as though he were a prophet of baseball. Who will be the next messenger for the game? Only time will tell.

In the Bible, God raised up messengers quite often to help correct and direct his Chosen People. When the people would stray, God would call on people such as Jeremiah, Elijah and Ezekiel to encourage people to change their ways.

And then, there was John the Baptist, the voice in the wilderness. He foretold of a coming messiah who we know is Jesus. Like Vin Scully after that Gibson home run, John the Baptist was loud and proud when it came to broadcasting the coming Savior.

Matthew 3:7-11 quotes John as saying: “You children of snakes! Who warned you to escape from the angry judgment that is coming soon? Produce fruit that shows you have changed your hearts and lives. And don’t even think about saying to yourselves, Abraham is our father. I tell you that God is able to raise up Abraham’s children from these stones. The ax is already at the root of the trees. Therefore, every tree that doesn’t produce good fruit will be chopped down and tossed into the fire. I baptize with water those of you who have changed your hearts and lives. The one who is coming after me is stronger than I am. I’m not worthy to carry his sandals. He will baptize you with the Holy Spirit and with fire.”

Later, Jesus makes his way to John to be baptized, yet one more duty performed by a prophet for the benefit of all.

Now we must be the prophets. We must be the ones who broadcast who Jesus is, what He does for us and how much He loves us. Like the prophets of old, we must share the hope that we have in our relationship with the living God. Like Vin Scully at a baseball game, we have to choose correctly when to talk, when to listen and, always, when to share our excitement.

We don’t need another voice in the wilderness like John. We just need for all of us who believe in Jesus to pass the word, to call the game of life in such a way that people recognize they need Christ and can benefit immensely from accepting a relationship with him.

As for baseball, I hope another voice rises up that we can come to enjoy as much as we did Vin Scully.