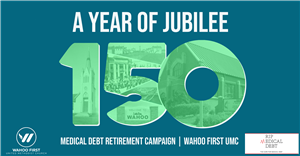 Nebraska’s Wahoo UMC set a goal for its 150th anniversary – to raise $15,000 for RIP Medical Debt, which erases the charges for pennies on the dollar.

“They hit the goal to wipe out $1.5 million in medical debt for our neighbors,” Michael Carpenter, pastor of the church, told the Wahoo Newspaper.