Williamston among those leading effort to recognize lynching victim 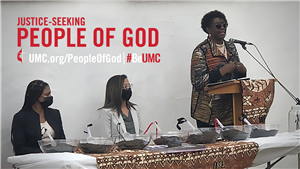 The Rev. Dee Williamston, clergy excellence director and assistant to the bishop, is one of three women who led a drive to get a memorial marker for Dana Adams, a Black man who was lynched by a mob in Salina in 1893 for refusing to leave a train depot when a white man told him to.

According to the Kansas Reflector, Williamston told the crowd about her trips to Gypsum Hill Cemetery, where a headstone for Adams had been placed on Juneteenth 2009.

“I would always stop and say, ‘We’re not done with you, Dana,’” she said. “You’re going to be remembered. We have not forgotten.’ His tombstone says: ‘Dana Adams, lynched by mob.’ We’re not done. We’re not done. And I also go, you know how you take care of a family member, I go over and I wipe off the stone to make sure it’s cared for.”

About 65 people attended the Oct. 24 service at Salina’s New Jerusalem Missionary Baptist Church. They filled jars bearing Adams’ name with soil, which will go to the Equal Justice Initiative’s Legacy Museum as part of the Community Remembrance Project, as well as the Kansas African American Museum in Wichita and other state museums.