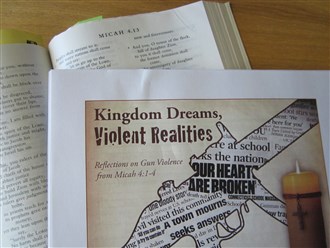 In days to come, the mountain of the Lord’s house shall be established as the highest of the mountains and shall be raised up above the hills. Peoples shall stream to it, and many nations shall come and say, “Come, let us go up to the mountain of the Lord, to the house of the God of Jacob, that God may teach us God’s ways and that we may walk in God’s paths.” For out of Zion shall go forth instruction, and the word of the Lord from Jerusalem. He shall judge between many peoples, and shall arbitrate between strong nations far away; they shall beat their swords into plowshares, and their spears into pruning hooks; nation shall not lift up sword against nation, neither shall they learn war any more; but they shall all sit under their own vines and under their own fig trees, and no one shall make them afraid; for the mouth of the Lord of hosts has spoken.

Gun violence has been a concern of United Methodists for decades. The 2012 Book of Resolutions includes Resolution #3426 Gun Violence (adopted 2000, revised and readopted in 2008). There were also other resolutions regarding gun violence before that. View the General Board of Church and Society's article which includes the resolution.

Two of the action steps it calls United Methodists in the Great Plains Conference to take are:

A variety of study materials are available:

Resources can also be found at