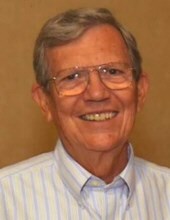 He received his Master of Divinity from St. Paul School of Theology in Kansas City. He was ordained a deacon in the Methodist Church in 1964 and an elder in 1967.

Jones served churches in Kansas, including Wilson, Dorrance, Gypsum, Garden City, Newton, and Great Bend. He then served as the Salina District superintendent before serving and retiring from East Heights United Methodist Church in Wichita.  Following his retirement, he served as the chaplain at GraceMed Health Clinic in Wichita. He was a delegate to both the Jurisdictional and General conferences of the United Methodist Church.

He married Patricia Miller on August 22, 1966. She preceded him in death.

A service celebrating his life will be at 10:30 a.m. Thursday, January 5, 2023, at East Heights United Methodist Church, Wichita. The service will be livestreamed and available to view through the church’s website. Graveside Service will follow at 3:30 p.m. at Wilson Cemetery, Wilson.