In 1988, the Kansas West Conference established it's first Korean-American congregation. The Korean United Methodist Church is located in Wichita, the largest city in the conference and a community with a significant Korean population.

The conference provided financial and spiritual support to the fledgling congregation. The church has grown from 12 members to more than 150 members.

While services are conducted in Korean, the service is translated into English for the spouses of its Korean-speaking members and visitors. The words of the hymns are projected in Korean and English on screens. Each song is sung first in Korean and then in English.

Central Korean United Methodist located in Overland Park, Kan., was founded more than 10 years ago by Dr. Young Ho Chun, professor of Theology at St. Paul’s School of Theology. For the first few years of Central's existence, they met at Asbury United Methodist Church. They bought their own building a few years later.

Each week their worship is led in Korean. They are growing and appealing to many Korean-speaking seekers. In 2006, their average worship attendance grew from 25 to around 75 a Sunday. Their pastor, Rev. In-Ki Lee, was pastor at a Korean church in Russia before coming to Central. They recently hired a seminary graduate to work with their youth and young adults who are second-generation Koreans. 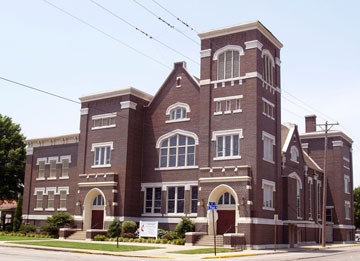 The congregation met in Church of Our Savior for the first years of its ministry.  On March 31, 1985, D.S. Don Hines, assisted by D.S. Jean Marie Grabher, former missionary to Korea, and Rev. Don Anderson, pastor of Church of Our Savior, constituted the Korean Church of Junction City as a member of the Kansas East Conference.