Janie VanHouden, who heads the Awana program at the church, said FUMC has participated in Awana for seven years. They have had volunteers from several NCCC sports teams for six of those years.

While basketball and volleyball teams help throughout the year in their off-seasons, members from the softball team participate in Awana every Wednesday night.

“We have at least 30 adult helpers from the church, too,” VanHouden said.

VanHouden has contacts with several NCCC coaches, who make the students aware of Awana as an option for community service and volunteering.

She said the NCCC athletes tend to go to the same classrooms and work with the same children each week.

NCCC freshman Ashlyn Riley said teaching is what she wants to do for her career, so working in the Awana program is a perfect fit for her. Freshmen Kyla Hutchens and Mary Kate Hale also said they enjoy working with the children and would definitely volunteer with Awana next year.

In turn, the volunteers from the church try to go to the teams’ games. Every Wednesday night, the students who show up to volunteer get a meal and a goodie bag of snacks to take home. 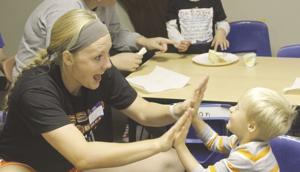