Learning to be Anti-Racist

Grants for anti-racism education and advocacy are available through the Congregational Excellence team of the Great Plains Conference.

These grants are meant to help congregations and networks learn about white privilege and structural racism and develop strategies to overcoming them. We call on congregations, on pastors and on laity in leadership positions “to educate themselves about the root causes and manifestations of racism, ethnocentrism, and tribalism within communities of faith and to develop strategies for overcoming these kinds of social divisions.” (UM Revised Social Principles, Other Social Issues, L, p. 29) It is expected that the grant receiver will send a short report about the project to be shared. Maximum grant: $300.

Apply for a Serving With Others grant.

Educating yourself about racism, its systemic strangleholds and how to avoid behavior that contributes to the problem is the first step in helping dismantle racism. Here are some options for books, videos and other materials that may help as you begin your journey. 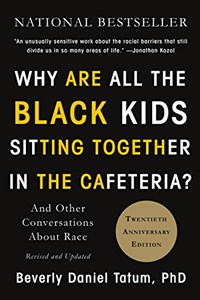 Why Are All The Black Kids Sitting Together in the Cafeteria?

This book by Dr. Beverly Daniel Tatum provides language appropriate to talk with children about racism and race relations. It breaks the silence and invites readers and leaders to embrace cross-racial dialogue. Tatum’s book also addresses the myth of colorblind Millennials. This book is a good resource for white, black, and brown leaders and parents to engage younger people.

NPR Podcast — Talking Race with Young Children: This 20-minute podcast explores how to have those difficult conversations with children. This podcast provides take-a-ways for both families of color and white families. The first take-a-way is, “Kids are not color blind so don’t be color silent.”

TED Talk — Is My Skin Brown Because I Drank Chocolate Milk?: Beverly Daniel Tatum explains how to talk to children about color. She is very frank, kind, and comical to listen too. The stories she tells about talking to her children and grandchildren are applicable to talking to all children. When having hard conversations with children she shares how to do this with grace and humility. This video is appropriate for parents, pastors, teachers, or anyone else who works with children and youth. 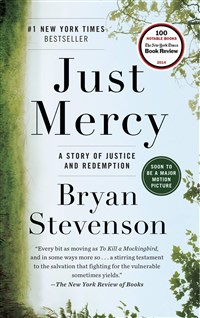 Just Mercy: A Story of Justice and Redemption

Through storytelling, Bryan Stevenson, an attorney, drives the challenges of racism and the brokenness of the justice system for redemption. The many stories Stevenson shares point to the ways racism has plagued even the justice system that is supposed to ensure equal justice. This resource helps to paint the practical picture of how racism has continued to destroy individual lives and communities.

Movie — "Just Mercy": You may also check out the movie Just Mercy, starring Michael B. Jordan and Jamie Foxx.

TED Talk — We Need to Talk About an Injustice: Stevenson connects how mass-incarceration is connected to poverty and racial injustice in the United States in this TED Talk. Steven’s work points to the brokenness the justice system, which is fueled by racial discrimination. 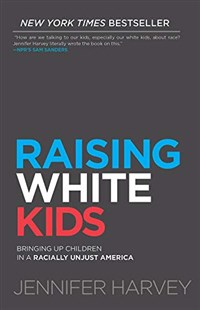 Jennifer Harvey provides and explains basic language and concepts to help parents raising white children engage in anti-racism. She explains how the myth of colorblindness has done harm and how embracing diversity has not gone far enough in equipping white children. Through personal story-telling and research, Harvey provides realistic and reliable strategies for engaging children in this work. This book is appropriate for parents of white children who desire to raise their kids to be active and able participants in our racially diverse society.

Bound For Justice Podcast — Raising White Kids: In this 46-minute podcast, the podcast hosts review Harvey's book. Each woman on this podcast has children that are different shades of color. The panel of mothers discussed how being open-minded when reading this is important. This podcast is useful as a preview prior to purchasing the book. 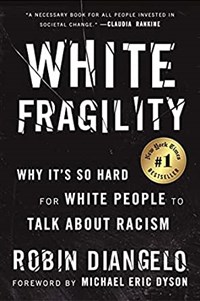 Robin DiAngelo’s book elaborates on the difficulties for white persons to talk about racism in what she calls “white fragility,” naming several ways through which white fragility occurs, both consciously and unconsciously. The book also gives language to things like white solidarity, which allows white people to tolerate and support racist behaviors when they encounter them at work and/or in families. It is a good resource to engage persons who identify as progressives (and conservatives alike) who think they have already overcome racism in America.

Deconstructing White Privilege: DiAngelo takes listeners on a deep dive to explore racism and learn how some of the most well-meaning statements can be hurtful. DiAngelo encourages people to have be authentic in talking and learning. While some of her comments may be difficult to digest or to understand, listen to this a couple of times. Give yourself time for this to sit with you.

Seattle Central Library — White Fragility: In this video 1 hour and about 20 minutes, DiAngelo challenges white progressives who may think of themselves as the “choir” when it comes to making progress in becoming antiracists. Taking the audience through her book, “White Fragility,” she explains the phenomenon, and discusses how white people can develop their capacity to engage more constructively. 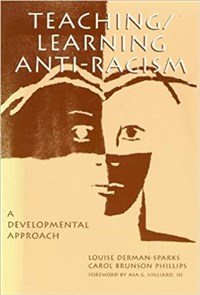 Louise Derman-Sparks and Brunson Phillips offer hands-on experience learning, including ways they have both encountered difficulties, successes, and life-lessons from their interaction with various students. This book is helpful for those wishing to guide others in a learning continuum by embarking on a transformational experience of becoming antiracist. The book pushes the boundaries of learning from merely cognitive to behavioral changes.

PBS — Anti-bias lessons help preschoolers hold up a mirror to diversity: In this story, children are initiated to skin color diversity using art projects. Cindy Acker, founder of the school, explains why it is important for kids to learn about diversity. 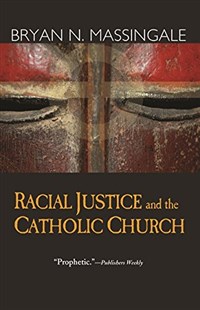 Racial Justice and the Catholic Church

Father Bryan N. Massingale engages the Roman Catholic’s social teaching on racism. He challenges the commitment the church brings to the stance on combating abortion and the lack of such commitment when it comes to addressing racism in America. Massingale asserts, contrasting the efforts on abortion and that of antiracism, “If ‘passion’ connotes commitment, involvement, and fervor, the Catholic stance on racism, in contrast, can be characterized as tepid, lukewarm, and half … .” This is a good resource, particularly for those who identify with the pro-life movement, to see the correlation between becoming antiracist and pro-life.

The Assumptions of White Privilege and What We Can Do About it: In this article, Massingale reflects on the Easter weekend, using the story of the woman in New York park who called police on an African American person. Massingale uses the woman’s racial behavior to explain the brutal killing of Mr. Floyd, all this happened during an Easter weekend. 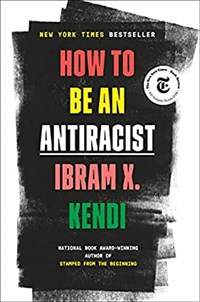 How to be an Antiracist

Dr. Ibram X. Kendi’s book challenges some historical, biological, and biblical assumptions about racist ideas, and offers the language to understand how racist ideas work within a system. The book provides several key definitions about racist ideas/systems and ways for individuals and communities to become antiracists. This resource also confronts the racist ideas that ethnic groups have come to embrace, including black Americans and recent black immigrants. Kendi gives avenues for those who reject racist ideas to engage the system in an antiracist journey.

Stamped from the Beginning: In this deeply researched and fast-moving narrative, Kendi chronicles the entire story of anti–Black racist ideas and their staggering power over the course of American history by using the lives of five major American intellectuals to offer a window into the contentious debates between assimilationists and segregationists and between racists and antiracists. From Puritan minister Cotton Mather to Thomas Jefferson, from fiery abolitionist William Lloyd Garrison to brilliant scholar W. E. B. Du Bois to legendary anti–prison activist Angela Davis, Kendi shows how and why some of our leading proslavery and pro–civil rights thinkers have challenged or helped cement racist ideas in America.

The Difference Between Being "not Racist" and Antiracist: In about one-hour ted talk interview style, Kendi offers insights on the recent racist occurrences and how they relate to racist ideas that persons of any ideology or race can promote racist ideas. He gives practical ways to eliminate racist ideas and embrace antiracist policies.

The Color of Law

In The Color of Law, Richard Rothstein — a former columnist for the New York Times and a research associate at the Economic Policy Institute, as well as a Fellow at the Thurgood Marshall Institute of the NAACP Legal Defense Fund — argues with exacting precision and fascinating insight how segregation in America is the byproduct of explicit government policies at the local, state, and federal levels. To scholars and social critics, the racial segregation of our neighborhoods has long been viewed as a manifestation of unscrupulous real estate agents, unethical mortgage lenders, and exclusionary covenants working outside the law. This is what is commonly known as “de facto segregation,” practices that were the outcome of private activity, not law or explicit public policy. Yet, as Rothstein breaks down in case after case, private activity could not have imposed segregation without explicit government policies (de jure segregation) designed to ensure the separation of African Americans from whites.

Brown University Presentation: Rothstein presents his findings about government policies and laws that deliberately segregated neighborhoods across the United States during a lecture at Brown University's Center for the Study of Race and Ethnicity in America. 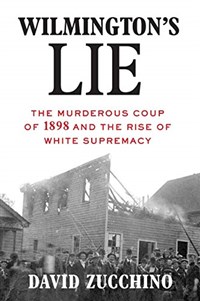 Pulitzer Prize winner David Zucchino tells the story of how one of the most integrated cities in America became just another segregated town dominated by white supremacists. In 1898, Wilmington had a burgeoning African American middle class and a Fusionist government of Republicans and Populists that included black aldermen, police officers and magistrates. But North Carolina’s white supremacist Democrats had a different strategy. They plotted to take back the state legislature in November “by the ballot or bullet or both,” and then use an editorial by a Black newspaper editor to trigger a “race riot” to overthrow Wilmington’s multi-racial government. Led by prominent citizens including Josephus Daniels, publisher of the state’s largest newspaper, and former Confederate Colonel Alfred Moore Waddell, white supremacists rolled out a carefully orchestrated campaign that included raucous rallies, race-baiting editorials and newspaper cartoons, and sensational, fabricated news stories. Ballot box-blocking strategies here became a template for use across the South.

Free Library of Philadelphia Author Events: Zucchino takes part in a discussion about his book and details for listeners what happened that devastated what had been a thriving African-American community. 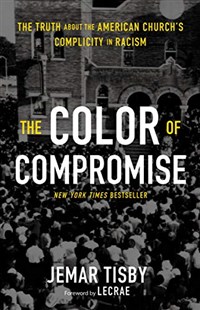 The Color of Compromise

Jemar Tisby tells the enlightening and compelling history we either ignore or just don't know. Equal parts painful and inspirational, his book details how the American church — across numerous denominations — has helped create and maintain racist ideas and practices. You will be guided in thinking through concrete solutions for improved race relations and a racially inclusive church.