My name is Lloyd Chaukura. I am a church member of the Zimbabwe East Conference in Mutasa Nyanga District. I was born in 1988 on the 14th of January at Old Mutare Hospital. My father has worked for Hartzell High School as a general worker for 33 years now. We stay as a family at Old Mutare Mission. I am the only boy in a family of five children. I grew up at the Mission and have been attending church service at Ehnes Memorial church ever since l was 12.

God enhanced us with friends, and our partnership is growing each year. We now have fifteen circuits connected in partnership to achieve discipleship, community development and Christian unity. District Superintendent the Rev. Linda Louderback, the Rev. Kalaba Chali, and the Rev. Mark Conard from the Great Plains Conference have been very helpful.

Looking at fifteen partnered circuits in Mutasa Nyanga District, as the Chabadza coordinator, this is how I have experienced the Chabadza project.

Chabadza means working together and sharing experience between the two conferences. The two had an opportunity to engage each other in different ways in partnership to achieve God`s work. The project has improved lives in a sustainable way for members of the United Methodist connection.

Chabadza program played a pivotal role in both conferences through email prayer requests. Circuits from both conferences are praying together, thus uplifting individual’s spirit. More so, by helping each other through Chabadza, different circuits in the Mutasa Nyanga District are being motivated. They continually seek the Lord and get closer to Him day by day.

Circuits are encountering God`s grace through the Chabadza projects, as their dreams and visions are being fulfilled. These dreams include having a standard constructed sanctuary, parsonage, transport, and a sustainable income-generating project. More so they are now able to communicate with friends abroad through emails and phone calls.

Most circuits in Mutasa Nyanga District do not have parsonages. The circuit sometimes rents a house, or the pastor lives in a cabin (a small house). Through the ongoing Chabadza support, many circuits have been given hope and new vision to build suitable parsonages.

Out of the 26 circuits in the Mutasa Nyanga District, thirteen do not have parsonages. Through support of Chabadza partner congregations, ten of our circuits are now involved in constructing parsonages. Some parsonages are still at foundation level, and some are almost completed.

In the same spirit, sanctuaries are now being constructed as well, since there are ten circuits in the district that do not have a sanctuary. However, most circuits are focusing on constructing parsonages first. Below are some pictures of the buildings.

Below is the first stage of the parsonage at Dambanda circuit partnered with Wichita-Pleasant Valley. A team from Pleasant Valley United Methodist Church helped during the construction process in 2013. 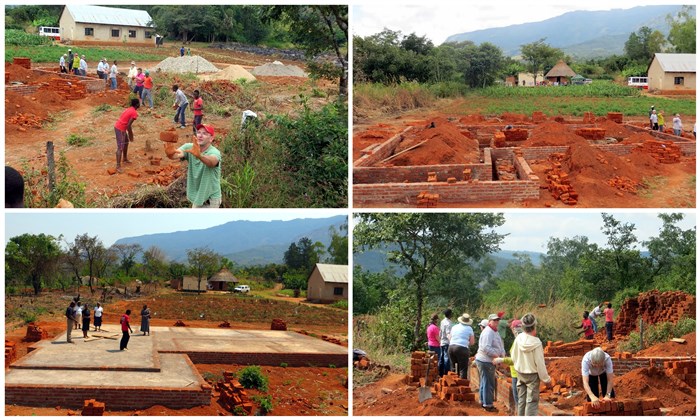 Second Example: We have Honde North--partnered with Pratt-First. Bishop E.K. Nhiwatiwa dedicated the parsonage that the people of Pratt-First helped make possible on the 6th of February 2015. The pictures below show the fruits of Chabadza.

Final Stage of the parsonage 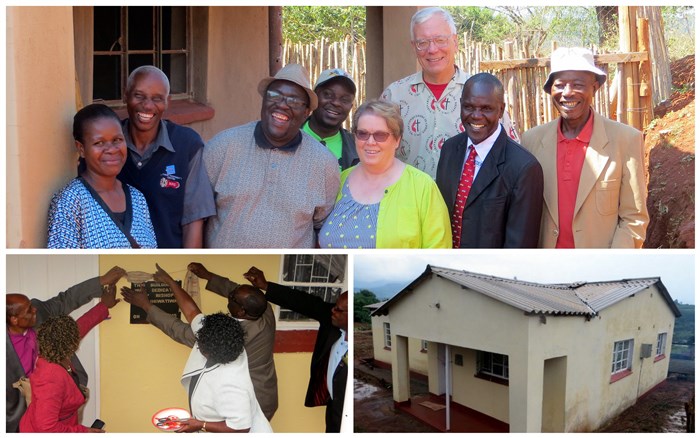 In this picture picture, District Superintendent Rev. Linda Louderback, the Rev. Mark Conard, and the Rev. Kalaba Chali visited Honde North on the 19th of August 2014.The parsonage was dedicated on the 6th of February 2015 by Bishop E.K Nhiwatiwa accompanied by DS Daniel Mutidzawanda.

With these two examples, you can see how much we appreciate the work and the outcome of Chabadza project. Most of the parsonages are at the foundation level. In that spirit, we are hoping to see the Bishop Nhiwatiwa visiting the Mutasa Nyanga District to dedicate more parsonages next year.

One of the hopes of the Chabadza partnership is to empower our rural churches and communities so that these local entities in joint cooperation can plan, implement, and operate their own projects. As the program encourages people to join hands and work as a team, it is motivating the communities to work as a cooperative to achieve their goals for both home and church projects.

In the Chabadza partnership, it is important to learn about different cultures and ways of worshiping God. It implies building relationships with people from another country. This is through email exchange, gifts, encouragement, prayer requests, and love between the partnered congregations. I have seen Chabadza as a way of demonstrating peace and unity between different countries (USA and Zimbabwe). Sharing from each other’s strengths is important. For example, one church may be strong in fasting, prayer, or financial resources, where the other is weak. When they share, both Chabadza participants are strengthened.

Sending representatives to each other’s countries has been very helpful. Being on the ground gives partner circuits a first-hand opportunity to extend their gifts to the surrounding community. Needs within Zimbabwe can be shared so that people in the Great Plains Conference can offer assistance.

People from the Wichita West District have been able to get to know individuals and their stories, sharing different experience, making it easier to fund-raise for projects. They worked to improve lives in sustainable ways through community development, and they became committed to the following: education, agriculture, and income generation for the churches or circuits.

Fifteen of our circuits in the Mutasa Nyanga District are partnered with congregations in the Wichita West district. Eight of them have thus far received visitors from the Great Plains Conference. It is a great achievement. As a district, we appreciate hosting our friends. District Superintendent the Rev. Daniel Mutidzawanda also visited the Wichita West District and learned a lot from the different circuits he visited. He observed that our way of worship, church construction, and setup are different. Although it is different, the good thing is we serve one living God. 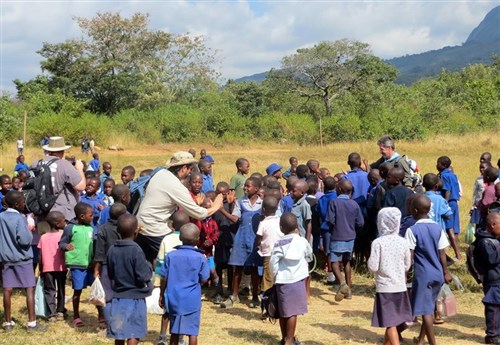 This photo (above) shows how Wichita Pleasant Valley team gets to understand the children`s stories and hence being interested in paying school fees for some of them.

In the following photo, we have the Rev. Dennis Wallace and his wife from Wichita-Asbury partnered with Mundenda. They were warmly welcomed by students from Mundenda school hence the beginning of a long relationship. We look for this relationship to continue and grow with the coming appointment of the Rev. Rick Just as pastor of Wichita-Asbury. 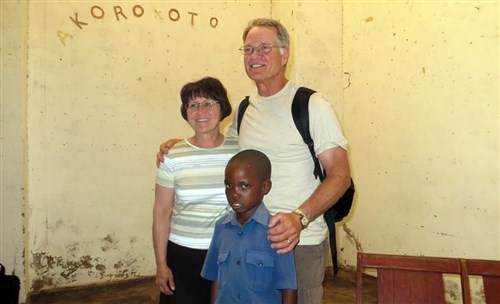 The next photo shows the Nyanga West congregation accepting children`s gifts from its sister circuit Wichita-Woodland.

The joy of congregation in our District also comes with the help of transport. Some circuits were blessed with motorbikes reducing the risk of walking long distance. In circuits like Ruwangwe, partnered with Sedgwick United Methodist Church, the pastor has to travel 70 kilometers [i.e., 43.5 miles] to reach the farthest preaching point.

Most of the preaching points in our district are at least 20 kilometers [i.e., 12.4 miles] from the main congregation. We have three circuits blessed with motorbikes as a mode of transport in a period of two years. Nyanga West, Honde North and Muparutsa each received a motorbike from Wichita-Woodland, Pratt-First, and Anthony respectively. The pastors are delighted, and the circuits are pleased.

In the picture (left) we can see Bishop E.K Nhiwatiwa testing and praying for the bike donated to Honde North circuit by its sister circuit Pratt-First. District Superintendent the Rev. Daniel Mutidzawanda is standing by. The pastor and church leaders of Honde North are rejoicing. 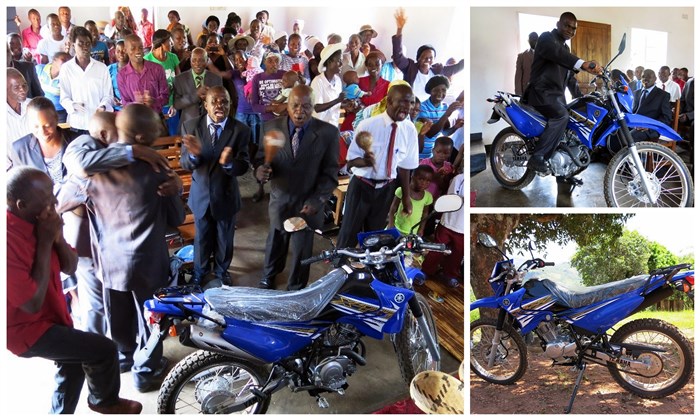 The picture (above) shows Muparutsa circuit partnered with Anthony circuit celebrating as they received a new motorbike. It is considered part of the equipment of the circuit for use by the pastor.

Communication has not been very effective, as most of our pastors did not have email addresses. The Chabadza partnership has encouraged them at least to open e-mail accounts of their own. I am gradually teaching them how to use their accounts. They usually access their accounts once a month or so when they travel to a town such as Mutare that is large enough to have an Internet café.

A few partner churches are in the process of buying smartphones for their sister circuits. This will be very helpful. The Chabadza project has made our pastors and congregations more open to technology. We look forward to being able to exchange greetings with our partner circuits.

These are issues that we hope to address in the Mutasa Nyanga District through the Chabadza partnership:

In conclusion Chabadza has improved the ways of living for our pastors and the District Superintendent. This gives peace of mind to our Bishop, knowing that he will be appointing clergy members to a circuit with a standard parsonage, church, and transport.

With God, as we join our hands and became one through Chabadza, we can help each other to realize our visions, hopes and transforming the world for the benefit of His people. The Mutasa Nyanga District`s joy can only be expressed by its congregation, as their lives are being transformed by Chabadza program. It may be a rural setting, but with the help of friends around the world through Chabadza together we can make a difference.